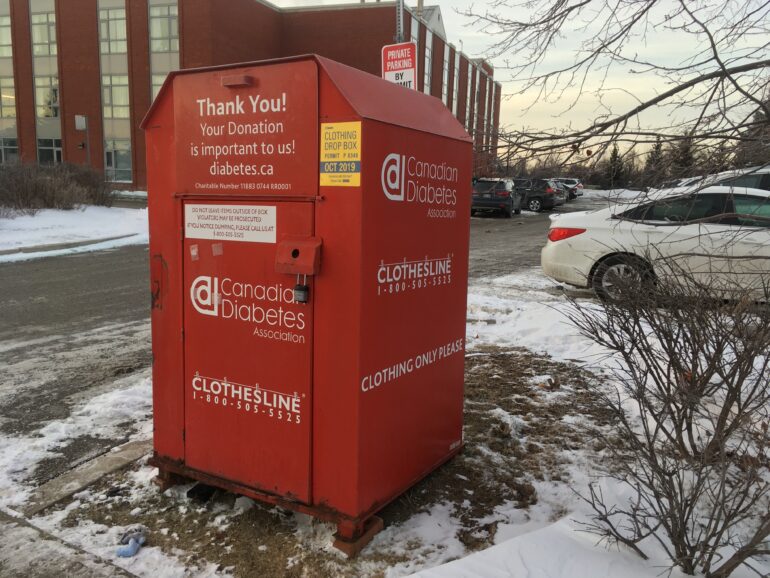 Clothing donation boxes, like this Diabetes Canada donation box, are being redesigned by the manufacturer following the deaths of eight homeless people who became trapped inside seeking clothing or shelter since 2015. (Rodrigo Diaz)

People getting stuck and dying inside donation boxes wasn’t a problem 25 years ago when they were designed, said John Luison, owner of the clothing donation box manufacturer RangeView Fabricating.

That’s changed as eight people — all homeless — have died trapped inside the boxes across Canada since 2015, the most recent a Toronto woman on Jan. 8. Others survived being caught inside the boxes, including an elderly woman who was saved by a police officer in N.B. on Jan. 21.

“This is a severe issue and we have a team of 20 to 30 people working on new designs,” Luison said.

People become trapped inside donation boxes because of the mechanism these boxes have installed on them. That mechanism is designed to protect the contents of the donation box from being stolen or being taken by animals.

“We believe the problem is not the donations boxes themselves but the issues of drugs abuse and people in homeless situations in the country,” he said.

Luison said permanently unlocking the boxes creates more of a problem since people are able to get in and out and steal clothes from them with ease and charities lose money.

All of the people who have passed away from being trapped in a donation bin were homeless and appeared to be trying to remove clothing from the boxes.

Police said all of the victims had the lower part of their bodies outside of the box while their upper body remained trapped inside the bin, upside down.

“The security mechanism while trying to close the bin pressures the victim’s torso resulting in respiratory impairment, this is the cause of death for most of these people,” police said.

Some charity organizations, like Diabetes Canada, expressed sadness regarding this issue and announced around 4,000 boxes are being re-engineered in order to prevent this from happening again.

In West Vancouver, the clothing donations boxes have been sealed since Jan. 3 and a ban is being considered.

A B.C. based charity organization Inclusion BC is removing all of its 146 donation bins.

The last death of a person trapped in a donation box in Vancouver occurred on July 25, 2018.

Authorities in Vancouver, where four of the eight recent deaths occurred, are currently analyzing better ways in which donations can be made and retrieved in a safer fashion.