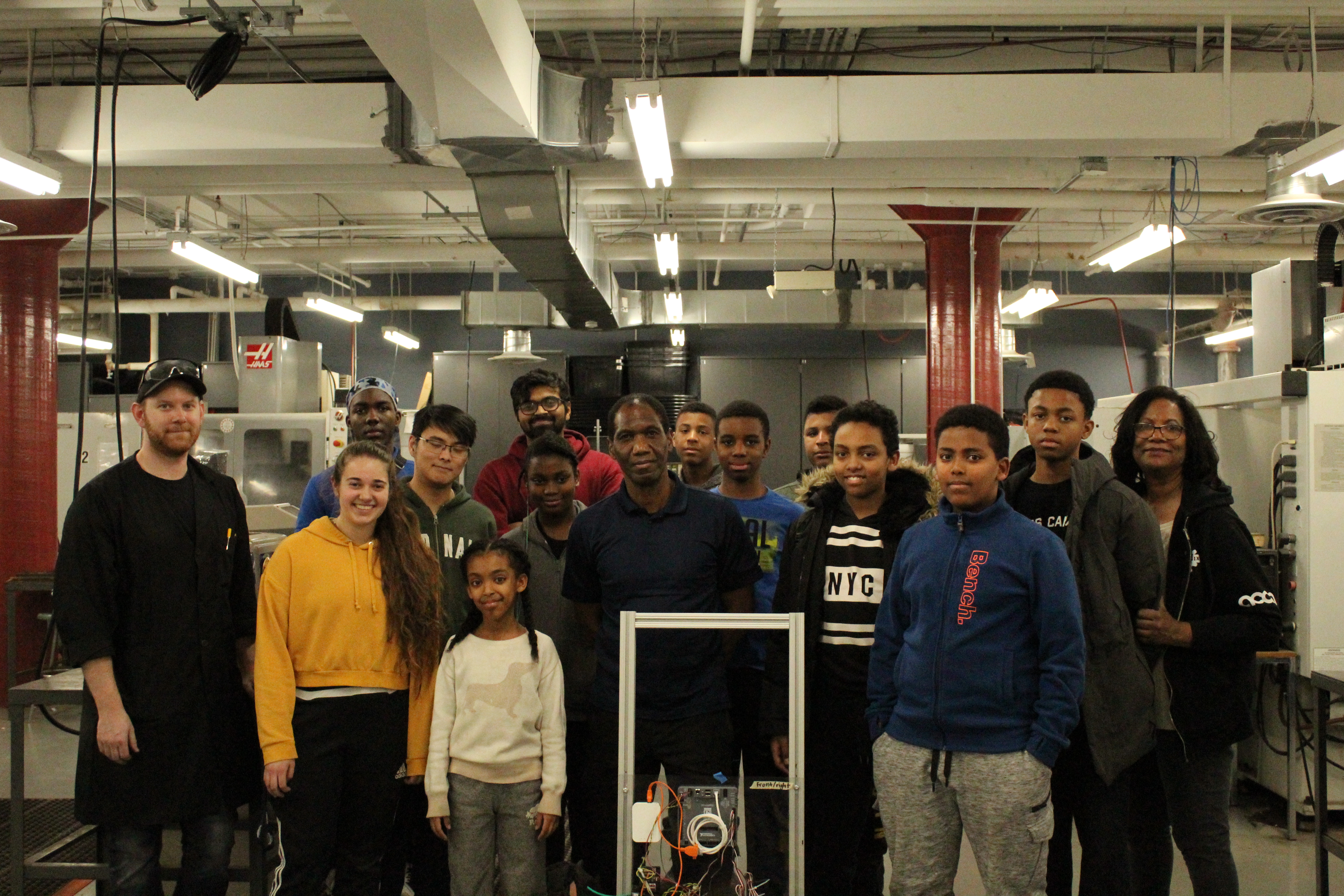 The African-Canadian Christian Network team is slated to participate in the FIRST Robotics competition on March 9 at Humber College. (Teandre Myrie)
Hiren Mansukhani
It was -21 C on a lazy Saturday.
The bitter winds tried to discourage anyone from stepping outside, but that didn’t keep Grantley Blenman from driving around 58 km to Humber North from Pickering at 7 a.m.

The retired high school physics teacher intends to do it every week until Mar. 10 to mentor a group of kids who are going to compete in the FIRST robotics competition at the north Etobicoke college.

In a basement lab in the school’s N Building, where he and his two teams were building two robots from scratch, he stressed his determination to guide students who really need his support by pointing to one of his team members.

“She’s just 11 and she knows stuff about coding many of her seniors don’t know. Kids like her are determined to learn. All they need is some direction and I am here for them,” Blenman said.

The two squads he’s mentoring, Team No. 7013 and Team No. 7712, aren’t like most other teams that represent a high school. The two represent the Christian African Canadian community.

Cherryl Lewis, Executive Director of the African-Canadian Christian Network (ACCN) said the competition would help change the narrative of the community. Moreover, it is also one of the best ways to expose its youth to STEM, she said.

“The negative stereotype of the black community inevitably makes our children believe what is said about us,” she said. “This competition will give us the opportunity to change that notion and expose our youth to more qualified and wealth building careers.”

Lewis said she believes this kind of positive reinforcement would help parents get more interested in their children’s careers and lives.

“Many parents in our community don’t come for parent-teacher meetings,” she said. “They don’t care.

“But when they see kids of the community building robots, they suddenly want their kid to do the same and this is how we break this vicious cycle,” Lewis said.

Sheldon John, a parent of a participant and an architect by profession, said he is concerned about his children’s future. He said he was never bogged down by racism and considered himself as capable as everyone else.

“I was fortunate enough to learn the things I did and I want this for my kids too. I mainly look at this as a way to build their confidence,” John said.

Lewis said since all the kids lived in different parts of the city, one of her biggest challenges was to bring the teams together and find a place to build the robots. And so she is grateful to Humber College for providing her teams with labs and mentors who could guide them.

Speaking about the technical challenges, Blenman said a shortage of supplies essential to building the robot is another main challenge.

“There is always this possibility that we might run out of supplies and our preparations could get halted,” he said.

The district-level qualifiers of the FIRST Robotics competition, which will be held on March 9 and 10, requires each team to build a robot that would do a set of tasks.

The teams have been given six weeks to build their robots, beginning Jan. 5, after which their robots will take centre stage on the day of the competition.

The two teams received their funding through their Go Fund Me page and are looking for more corporate sponsors who could help them with the materials they need to build the robot.

Nevertheless, Blenman is optimistic about building the robots on time.

After a supercharged Saturday morning of work, the team headed for lunch. Once they returned from their break, Blenman was back at it as if they had achieved nothing.

Half an hour later, Blenman walked past the lab to a board and checked off their task of preparing the test board for the robot.

“We only have three weeks left. We have to give it our all. It’s now or never,” he said.