Rashida Tlaib: Making history, one knock at a time 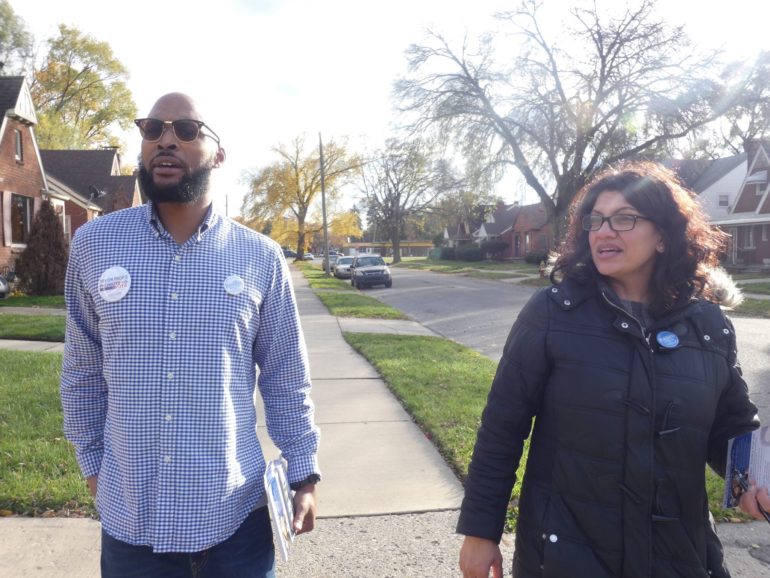 Detroit, Mich. ‐ Rashida Tlaib approached the door with an effervescent smile on her face, “Hi baby!” she said to a mother holding her child as she cracked the door open.

Tlaib’s charm was effusive as she knocked on more than 50 doors in three hours on Monday to help get out the vote.’

Talib will make history as the first Palestinian-American woman elected to the U.S. Congress. She will be one of two of the first Muslim women elected to Congress, alongside Somali-American Ilhan Omar of Minnesota.

The single mother of two boys is running unopposed for Michigan’s 13th Congressional District.  The district includes the Westside of Wayne County, Downriver, and Detroit.

“My dad used to drive that car!” Tlaib exclaimed when a chocolate brown and black striped van backed out of a driveway.

The Detroit native is the oldest of 14 children and completed her schooling in the city.  She attended Southwestern High School, completed her BA in Political Science at Wayne University in 1998, and law school at Thomas Cooley Law School in 2004.

That is to say, she’s quite familiar with the area and its people.

“What’s the kindest woman doing walking through an alley?” one of two local landscapers asked when they saw Tlaib approach them.

The 13th District in the west side of Detroit is 56.3 per cent African-American and working class.

The wealth disparity in the Detroit area is heartbreakingly distinct; many of the streets near 6 Mile Road are in need of repair and cleaning.

Just 30 minutes away in Troy, located in metropolitan Detroit, is Somerset Collection, a luxury mall with valet service. 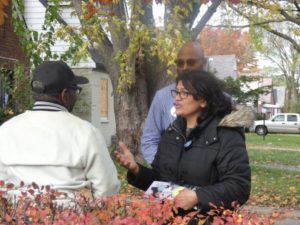 Tlaib’s campaign worked to address and push back against this stark gap.

“We got you, we got you,” they responded with enthusiasm.

Prop 3 tackles voter suppression by increasing access to the polls.

Tlaib also wants to tackle the issue of minimum wage.

People in the service industry are paid based on the tip wage but there is a lot of talk about one fair wage for everyone, Tlaib told her constituents.

Tipped workers earn only $2.13 an hour as mandated by the U.S. federal government, which historically started during the Jim Crow era, Tlaib added.

Many businesses didn’t want to pay freed African-American slaves a living wage thus, the tipped wage was what service workers were given.

It continues its modern day impact on minorities and women, who are overwhelmingly represented in the service industry.

Tlaib wants to change that by fighting for a $15 minimum wage for all workers and creating a proper living wage for those in the district.

Many people are drawn to Tlaib’s charm, including Oscar Arbulu, who is a field organizer with her campaign.

Arbulu was impressed by Tlaib because she stood up to U.S. President Donald Trump when he was a presidential nominee.

Tlaib interrupted his speech at the Cobo Center in 2016, asking him to return a military award he received because she believed he didn’t deserve it.

She was then escorted out by security.

.@RashidaTlaib talks about getting thrown out of a Trump rally (for asking him if he ever read the US constitution), the reality of being a Muslim in America, and the importance of knocking doors pic.twitter.com/xOl50igFO2

This isn’t the first time the Tlaib has advocated for a cause.

When she made history as the first Muslim woman elected to the Michigan legislature in 2008, she was an environmental advocate and fought to protect homeowners from mortgage bankers and tax preparers.

She took on the conservative industrialist Koch Brothers to remove the petroleum coke pollutant from the Detroit riverfront.

Tlaib is a member of the Democratic Socialists of America and advocates for medicare for all, protecting DREAMers, and debt-free college.

Persistence drives Tlaib’s canvassing strategy as she talks with constituents at the door and even walks inside to ask if any assistance is needed to get to the polls.

“My team has got me on Facebook and Snapchat,” Tlaib said laughingly as she gets her phone out before moving onto the final election event of the day.