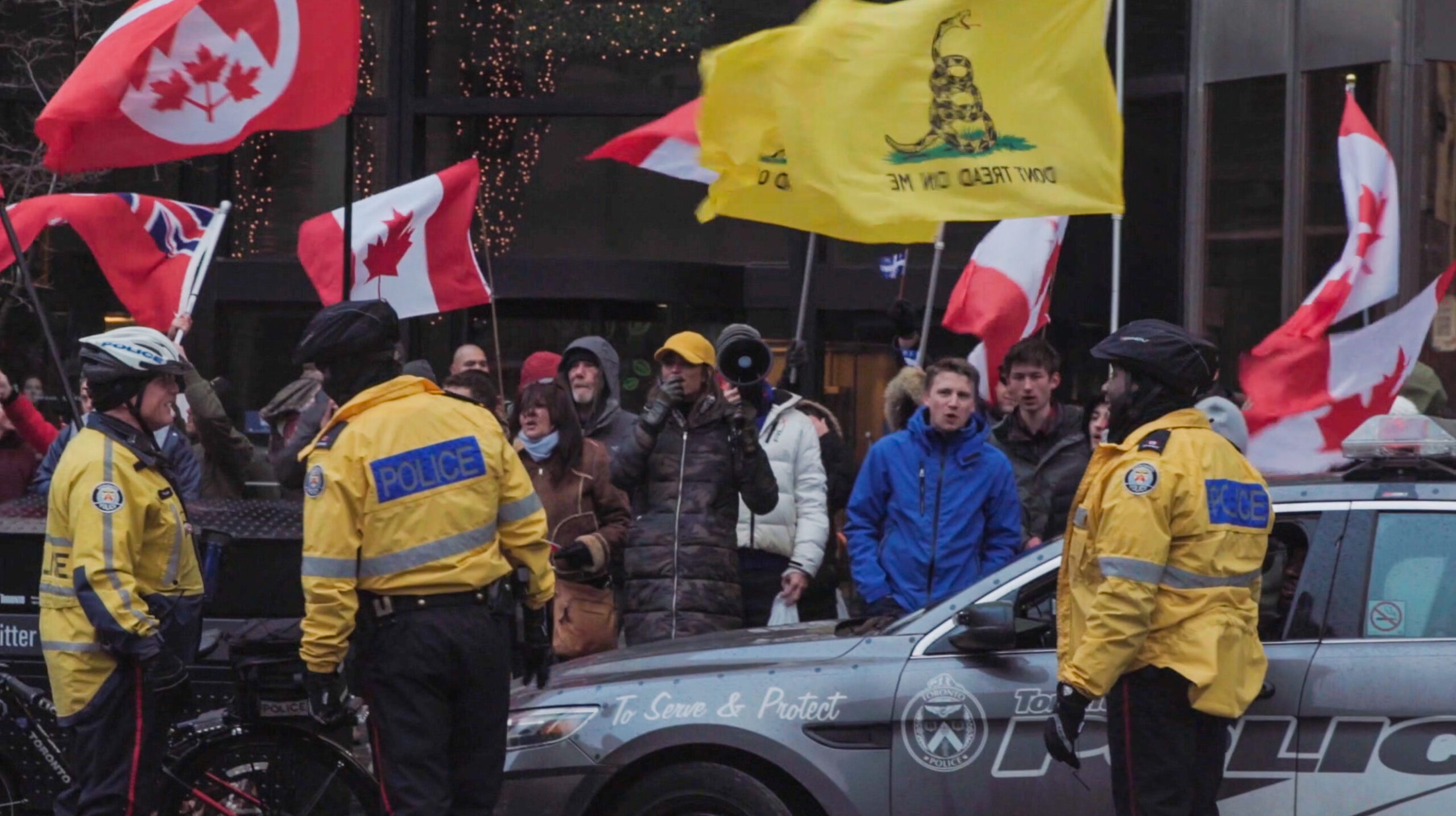 Toronto’s downtown core was relatively quiet for a Saturday afternoon due to drizzle and brisk wind, but that didn’t deter a small crowd of protestors from gathering outside Union Station.

They stood on the north side of the intersection, some waving Canadian flags. The other flags on display were less familiar. They included the Gadsden flag, which dates back to the American Revolution — it features a coiled rattlesnake atop the words, “DON’T TREAD ON ME.”

It has been readopted for modern use to signify anti-government sentiments and vivid patriotism.

The flag-bearing, self-declared patriots on the north side received sparse honks from slow-moving traffic and confusion from pedestrians passing by — the purpose of the protest was unclear.

Speculation grew as a man — on the opposite side of the intersection — mounted a concrete barrier and delivered a succinct message through a megaphone, addressing the gathered protesters.

“Hey, all you proud people — we’re here to ruin your F***ING day,” the man exclaimed.

It was only the start of an afternoon of direct action against failed Toronto mayoral candidate Faith Goldy, who had organized an anti-immigration protest outside the United Nations Toronto offices.

Goldy became well-known for her far-right positions on immigration and nationalism during the most recent Toronto municipal election, in which she finished third, behind John Tory and Jennifer Keesmat.

Her close ties to white nationalists and neo-Nazis clouded her campaign.

The UN Global Compact for Migration — a non-legally binding global agreement that Canada has signed to provide protections to migrants — was the target of her demonstration on Saturday.

“They’re unaccountable and unelected, and yet they are injecting a mass-invasion policy into our federal legislature — and not a single damn Canadian was asked,” Goldy said of the UN in a Periscope live stream during the event.

The counter-protest was organized by Craig Herbert of Ontario Inclusive Now. He said he learned about Goldy’s planned demonstration just a few days prior.

“It was kind of a short notice thing … it turned out there was no counter-protest planned, so we ended up planning our own,” Herbert said.

The counter-protestors, carrying pro-immigration and pro-refugee signs, showed up in numbers equal to Goldy’s side. After a short period of trading chants and insults, Toronto police arrived to mediate between the two groups.

While Goldy live-streamed to supporters on Periscope, Rachel, a counter-protester across the street, handed out informational leaflets about Goldy’s politics to passersby, who were confused by the chaotic scene.

“I’ve been talking to people just on the street and they stop by and they look interested and kind of confused, and I say ‘Do you know who Faith Goldy is? Do you know what’s going on here?’ And no one knows who she is,” Rachel said.

Rachel informed them of Goldy’s firing from right-wing media outlet, The Rebel, due to her appearance on the neo-Nazi podcast, The Daily Stormer. She also pointed out Goldy’s desire to transform Canada into a 96 per cent white state.

“The people that I’ve spoken to all seem to be repelled by her ideas,” Rachel added.

Another counter-protester, who has worked with anti-racist coalitions opposing bigotry in Toronto for two years and requested to remain anonymous for safety concerns, identified the groups and flags rallied behind Goldy.

The man, hidden behind dark aviators, pointed out the flags of white-nationalist group, Identity Canada. He also indicated the presence of a militia, dubbed the Three Percenters, protesting alongside Goldy and her supporters.

“Most of them are keyboard warriors. A few of them are out to carry out violence, definitely the ones in militia gear calling themselves the Three Percenters — they’re basically an ultra-nationalist, fascist militia,” the man said.

At one point, Goldy turned to her supporters, megaphone directed at their faces, and bluntly asked if they were ever consulted about Canada’s role in the UN pact, or if they approved of “opening Canada’s borders.”

Each question provoked the crowd to deliver a resounding, “NO!”

Global migration is only expected to increase in the coming years due to population growth, rising inequality, and climate change, according to the UN.

The Compact for Migration urges global cooperation to mitigate factors causing migrants to flee their homes. It comes after Europe received the largest inflow of refugees and migrants since World War Two, according to Eurostat.

The pact also aims to ensure migrants are fully educated about their human rights. It intends for all citizens to receive objective, fact-based information about migration, in order to reject negative falsehoods about the issue.

German Chancellor Angela Merkel recently defended the Compact and the UN in a speech to the Bundestag, after Australia pulled out of the agreement.

“Like the refugee pact, [it] is the right attempt to find solutions for global problems internationally, together,” Merkel said.

Craig Herbert also stressed the importance of direct action on the street against the anti-immigration angst. He called it “an obligation” to stand up against radical right-wing ideas.

“I think that the most effective method of combatting this sort of rising right-wing authoritarianism is to build healthy, inclusive communities and keep it so that the situations under which fascism flourishes aren’t allowed to take,” Herbert said.

The crowd of counter-protestors outstayed Goldy and her supporters.

As they wrapped up and congratulated each other, Herbert discussed the recent rise of nationalism, especially in cities like Toronto.

“From what I’ve seen, I think we are unfortunately living in an increasingly atomized and depersonalized age, where a lot of people are feeling lonely and feeling lost,” he said.

Herbert believes Goldy’s version of Canadian nationalism and other radical versions like it are attractive to vulnerable people, since they “offer an identity to people who are without an identity.”