Queens, N.Y. – Alexandria Ocasio-Cortez hit the pavement on the last day of campaigning for the midterm elections with her earliest supporter, her mother Blanca.

The pair spent Monday afternoon outside of St. Sebastian’s Catholic Academy in Woodside pulling the vote, their pockets stuffed to the brim with campaign literature.

Wrapped in a down jacket, Ocasio-Cortez embraced residents of the western Queens neighbourhood like old friends. 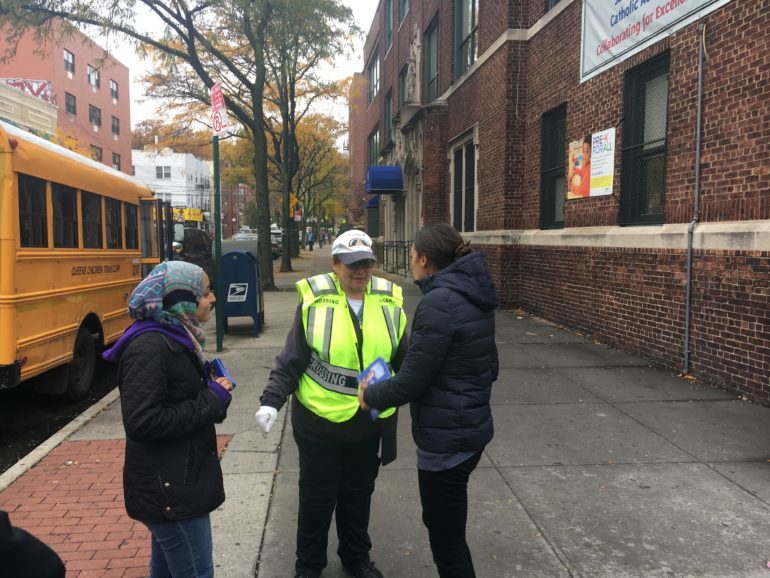 Just one day before she is expected to become the youngest woman ever elected to the United States Congress, Ocasio-Cortez is showing no sign of slowing down.

According to Thomas Muccioli, a campaign volunteer, the mission is not just to win, but to expand the electorate as well.

Turnout among Democrats improved in the primaries when Ocasio-Cortez defeated sitting congressman Joe Crowley, and the campaign hopes this will be the case on Tuesday, Muccioli said.

Support from Woodside Democrats was deafening on Monday, with car horns echoing for Ocasio-Cortez all the way down Roosevelt Avenue.

In the months since her primary win Ocasio-Cortez has become a local celebrity, but interest in her race is not limited to NY-14.

A Japanese documentary crew followed Muccioli and the Ocasio-Cortez campaign for an entire day, their team barely able to fit into the buildings they canvassed.

Volunteers, and even Ocasio-Cortez herself, seem shocked by the worldwide interest in her campaign.

Muccioli believes it is Ocasio-Cortez’s issues-based campaign that has struck a chord with residents and international observers alike.

Until Team “Let’s Make a Space Force, Build Child Concentration Camps, & Give $2 Trillion to the Rich” explain how they finance their mass cruelty, they haven’t earned the right to ask how we pay for people’s healthcare.

Ocasio-Cortez is a Democratic Socialist, and along with Bernie Sanders, she is at the forefront of a left-wing movement within the Democratic party.

Issues like universal healthcare, affordable education, and housing are all pillars of Ocasio-Cortez’s campaign.

The latter is a major issue in NY-14 with rent prices soaring across Queens and the Bronx.

Locals are counting on Ocasio-Cortez to follow through on her slogan that “housing is a human right,” and permanently fund the National Affordable Housing Trust Fund, Muccioli said.

This would provide and maintain affordable housing for lower income families, a group that makes up a major demographic in NY-14.

Ocasio-Cortez’s socialist platform has the backing not only from left-leaning endorsers like Sanders and the Democratic Socialists of America, but from more moderate organizations as well.

Both the Obama Foundation and the American Federation of Labour and Congress of Industrial Organizations have supported Ocasio-Cortez, the AFL-CIO being the largest union in the US.

“Ocasio-Cortez is fighting for working people, who for too many in Washington are an afterthought,” New York AFL-CIO president Mario Cilento said.

Cilento believes that Ocasio-Cortez’s promise to defend social security, Medicare and access to affordable healthcare for all workers is what makes her right for Congress.

Ingrid Gomez, a campaign volunteer and community leader, thinks that one of Ocasio-Cortez’s priorities in Congress should be to build relationships with moderate members of her party.

Her implied support for Governor Andrew Cuomo, however, earned her the scorn of the Democratic Socialists of America, Gomez said.

Great statement from @nycDSA on Ocasio-Cortez’s endorsement of Cuomo.

“Socialists have a responsibility to name our enemies, and high on that list is Andrew Cuomo.” https://t.co/MQpThchim3

“New York electoral laws are made to suppress the vote,” she said. 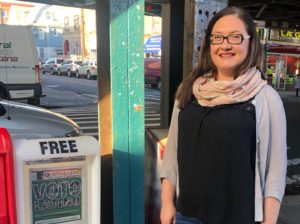 When asked about working-class turnout, Gomez noted that significant support did come from gentrified communities, but that Ocasio-Cortez would continue to work to represent all of NY-14.

Not all voters in the district support Ocasio-Cortez and her platform.

Sarah, who declined to give her last name, is a financial analyst from Woodside and self-described Trump supporter.

She disagrees with Ocasio-Cortez’s plan to abolish U.S. Immigration and Customs Enforcement.

More commonly known as ICE, the department has come under criticism for its harsh imprisonment policies at the border.

Sarah will be voting Republican on Tuesday, but the majority of NY-14 are projected to vote for Ocasio-Cortez.

Gomez said Ocasio-Cortez does not want to make any assumptions about the results tomorrow.

One thing, however, does seem certain – she can count on her mother’s vote.