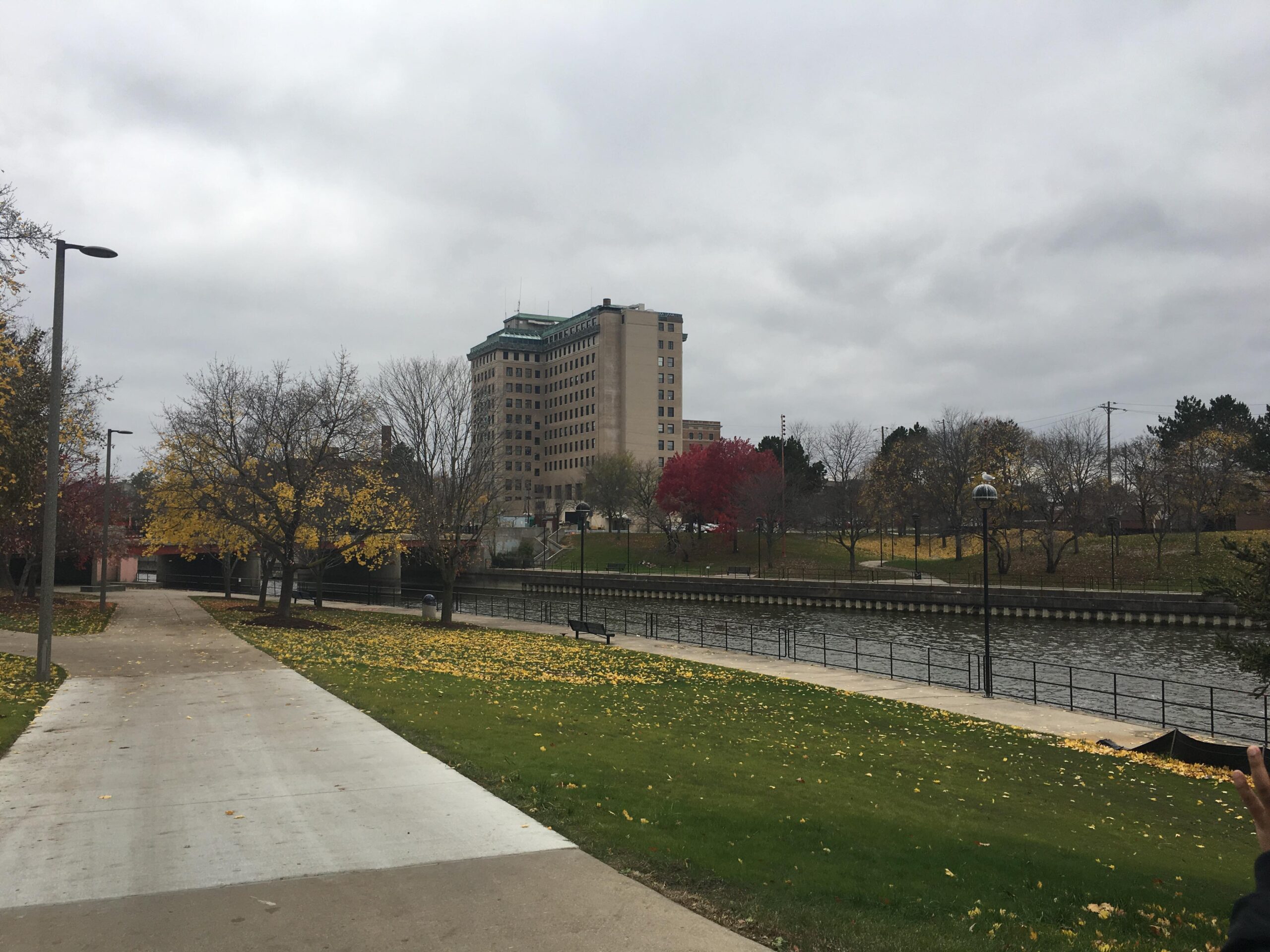 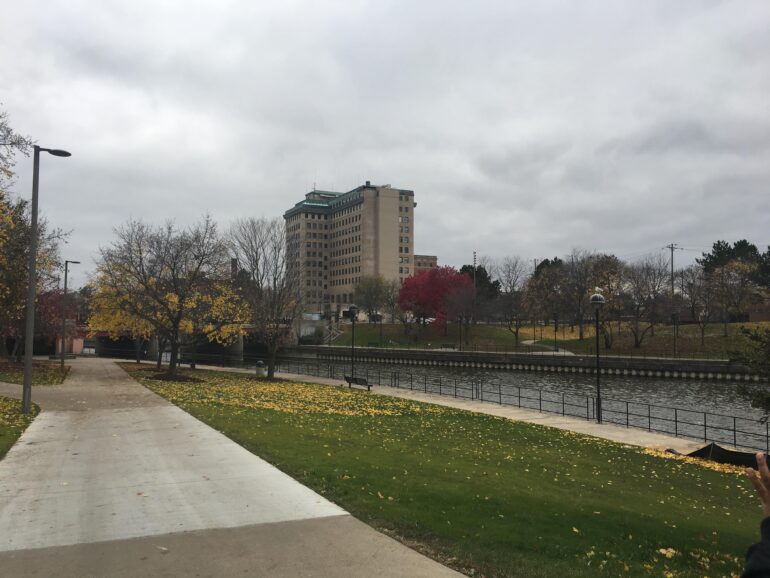 The Flint River at the University of Michigan-Flint campus (Michelle Guo).

FLINT, Mich – The heart of downtown Flint, a mere four-hour drive from Toronto, looks like a ghost town with only a few residents walking down the streets during peak business hours.

At the University of Michigan-Flint campus, the halls are quiet and walkways largely empty, a far cry from Humber College’s busy campus.

The city of Flint has suffered from economic depression since the 1978 GM downsizing from 80,000 to 8,000 workers.

Flint has roughly 100,000 inhabitants with just under 42 per cent of the population living in poverty.

Michigan became a blue state after the midterm election and Democratic Governor-elect Gretchen Whitmer is scheduled to take over from Republican Rick Synder in January.

Whitmer already has some issues to tackle, including the ongoing water crisis in Flint.

“Now more than ever, we need people on both sides of the aisle to work together in Lansing so we can focus on what really matters. And that’s getting things done to improve people’s lives right now. That’s how we clean up drinking water.” said Whitmer, during her victory speech on Tuesday. 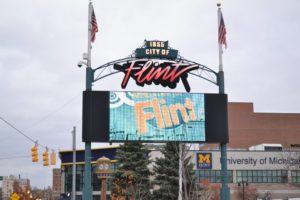 The City of Flint sign outside of the University of Michigan- Flint. (Rafael Indyarta)

The water crisis began in 2014 when the city switched its water source from the Detroit River to the Flint River as a temporary measure to control their water source and cut rising water rates.

The switch led to contamination of the water supply and pipes, exposing residents to high levels of lead poisoning and severe health risks, including Legionnaires disease that killed 12 people.

The city is using federal money and state money for the pipe replacement. Even with the progress, many residents are dealing with their yards destroyed because of the city’s repairs.

Adrian Montgomery, a UM-Flint student said his pipes were destroyed by the city, “They just dug up my yard and just threw dirt back on it. So now there’s just dirt. They did fix the pipes and they busted one so we had to leave our house.”

“I feel like it has gone on for so long, and it keeps on getting swept under the rug, and people tend to forget that it’s actually happening, that it’s still happening,” said Janae Smith, an actuary mathematics and communications student who also lives in the area.

Her friend, Whitney Boose, a communications and theatre major said, “We still can’t use the water, there’s still families that the waters been tampered with. And they have to replace their pipes, and replacing pipes are not a cheap thing to do.”

Eucharia Ganda, the school’s student government president, is an international student from Italy who was born in Nigeria.

“The U.S. is always thinking about saving other countries while it is here that needs to be saved; the country has its own problems,” Ganda said about the crisis.

“It’s sad… it’s shameful, the issue has been going on for 4 years and there is still no clean water, hopefully, the new governor will fix it…but it will take a lot of money to change the pipes and take some years,” Ganda added.

Along with the water crisis, the midterms brought many issues to light for first-time voters, especially younger citizens.

“This is my first election and I have time to grow,” Montgomery said.

He admits that not voting weakens his community and an educated vote is important so this generation shouldn’t take the right for granted.

Some of the highly contested issues included the three passed proposals on the ballot:

Proposal 1 legalized the recreational use of marijuana, Proposal 2 was a policy to stop gerrymandering called “Voters not Politicians”, and Proposal 3 was “Promote the
Vote” to enhance voters access and regulate voter suppression. 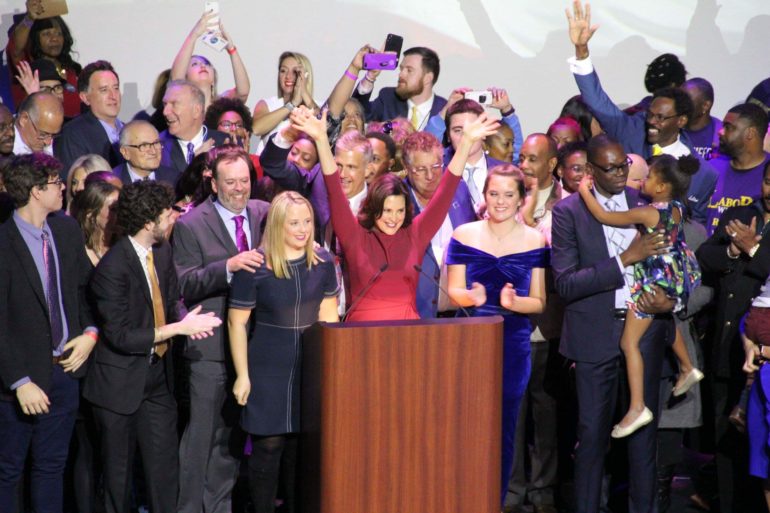 “To the legislature, Democrats and Republicans alike, I’m ready to work with everyone who actually wants to solve problems in this state,” Whitmer said following her victory.

Whitmer also supports the organization One Fair Wage, which is similar to Canada’s Fight for $15 and Fairness movement.

“She backs one fair wage, and one fair wage is looking for $12 an hour minimum wage in increments,” said Laura MacIntyre, an activist and sociologist at UM-Flint.

“Tipped workers make less than $4 an hour, and Michigan is higher than other states…so the one fair wage advocates for $12 an hour for all workers, including tipped workers, in keeping their tips as well,” she said.

While people are ready to see change, they are also skeptical of what Whitmer can accomplish.

There are also concerns about Whitmer from some Michigan residents because she took donations from Blue Cross Blue Shield lobbyists for her campaign.

She has now selected Dan Loepp, the CEO Blue Cross Blue Shield of Michigan, to be part of her transition team.

A petition started by the Detroit Democratic Socialists of America to remove Loepp from that team currently has 1,208 signatures.

Similar sentiments were said by some students at UM-Flint about Whitmer.

In light of the crisis, many residents blame the incumbent Governor Snyder and his administration for their lack of action to treat the water properly prior to the switching to the Flint River and harming the people of Flint.

“He should be in jail, maybe under the jail, but that’s something else,” said MacIntyre.

Snyder’s two-term limit was up this year, therefore couldn’t run for re-election.

“I feel like he should be prosecuted with the rest of the people,” Boose said.

“It shouldn’t have happened. And I feel like that was a lapse in common sense,” Smith echoed.