Democrats take the win in Michigan 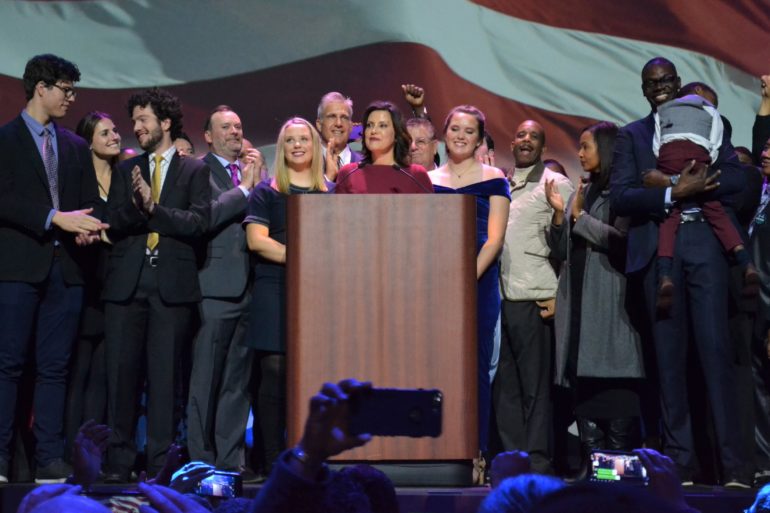 Gretchen Whitmer gives her victory speech to her crowd of supporters. (Rafael Indyarta)

Detroit, Mich. — Governor elect Gretchen Whitmer spoke of building bridges instead of walls at the Michigan Democratic Election Party at MotorCity Casino in Detroit, as they celebrated key midterm election victories in their state.

Michigan will get a blue governor for 2019, as Whitmer beat out Republican candidate Bill Schuette by about eight points for the highest seat in the state.

Whitmer took 52.8 per cent of the vote and her main opponent Republican Bill Schuette came in second with 44.3 per cent.

Her running mate, Garlin Gilchrist II, is now the Lieutenant-Governor-elect of Michigan.

The Congressional races were split by the two parties, each winning seven of the 14 races. The Democrats did flip district 11, with Haley Stevens beating out Lena Epstein to be the first Democrat to hold the seat since 2012.

Democrats gathered at the Sound Board space within the casino to celebrate their victories, not just in the state, but across the country.

Volunteers worked hard to ensure that their candidate got elected, whether it be on the phones or going door-to-door

“We work so hard, we were canvassing for the last month almost every day, today we spent the whole day at the polls, as a matter of fact, this is my first time at the big party because usually I’m so tired and I go crash at home,” said one supporter at the party.

Cheers erupted as Democrats were being projected to win seats on television. Supporters were sharing ideas and opinions as the night progressed.

When Whitmer took the stage, the venue felt more like a concert than a political party.

In her speech, Whitmer described the Mackinac Bridge, and why she used it in her campaign logo.

“The Mighty Mac is a powerful reminder of our great legacy, we are a state of problem solvers innovators, a state of people who value hard work,” she said in her acceptance speech.

Whitmer said she will work with both parties in the state’s legislature to ensure better lives for the people of Michigan.

Rashida Tlaib also took home a huge victory with 88.7 per cent of the vote in the 13th Congressional District.