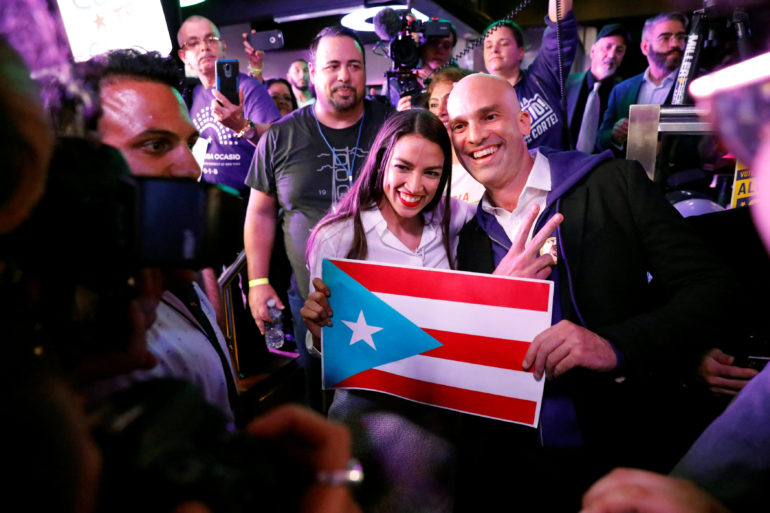 Brooklyn, N.Y. – Political junkies at Solid State bar in Woodside, Queens, are glued to the projector screen hanging in the middle of the room watching the midterm election results coming in from across the East River at MSNBC.

Elated cheers reverberate through the small, dimly-lit pub as the Democrats officially took back the House of Representatives.

Boos drowned out the pinball machines in the back as the official tally comes in from states like Texas and Florida, a telling sign that Republicans have kept control of the Senate.

Up the road at La Boom nightclub on Northern Boulevard, Alexandria Ocasio-Cortez is celebrating her win with an exclusive guest list of close family, friends, and hard-working volunteers.

“[This] is a movement, a larger movement for social, economic and racial justice in America,” Ocasio-Cortez said after receiving more than 75 percent of the vote.

She is the youngest woman ever elected to Congress, and one of the most prominent figures in this year’s so-called “Blue Wave.” 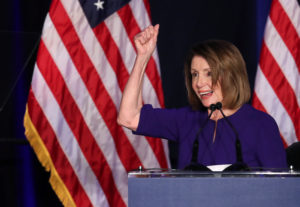 As predicted, Democrats won a majority of seats in the House last night, with 221 seats to the Republicans’ 196.

This is an increase of 26 seats for Democrats and is the first time they’ve held the House since 2010.

Nancy Pelosi is expected to become the Speaker of the House, a position she held from 2007 to 2011, although she may face a challenge from the left-wing, progressive faction of her party.

“What you have done in the past speaks to your credentials and I think I’m the best person to go forward to unify, to negotiate,” Pelosi told reporters on Wednesday.

She wants more action and less reaction from the incoming Congress.

Climate action in the form of a commitment to renewable energy is a priority for Shepard, and she hopes it will be for the Democratic House as well.

Alongside Ocasio-Cortez, a number of progressive and diverse candidates were elected Tuesday night, including Sharice Davids in Kansas, Rashida Tlaib in Michigan and Ilhan Omar in Minnesota.

Democrats will use its majority to begin taking control of key Congressional Committees.

Jessame Hannus, a community advocate from Queens and an Ocasio-Cortez supporter, is more pessimistic about the midterm results.

“There hasn’t been enough of a change in the status quo with Republicans keeping the Senate,” Hannus said Tuesday night. “There won’t be gridlock, Republicans will just railroad through.”

Republicans picked up two seats in the Senate, increasing their majority to 51 over the Democrat’s 45.

Democrat Claire McCaskill, a Missouri senator since 2006, lost to Josh Hawley by a much more significant margin.

The only state to see a Senate seat flipped to the Democrats is Nevada, where Jacky Rosen beat Republican Senator Dean Heller. 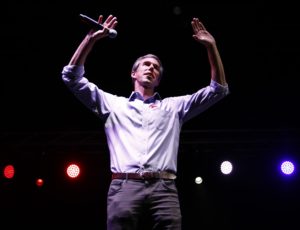 Perhaps the most closely followed Senate race was in Texas.

“I want to thank this amazing campaign of people,” O’Rourke said in his concession speech. “Not a dime from a single PAC. All of you showing the country how to do this. I am so fucking proud of you guys.”

Some O’Rourke supporters, although disappointed, are already calling for him to run for president in 2020.

Although a divided Congress is a blow to President Donald Trump, he is unlikely to concede this point.

Those that worked with me in this incredible Midterm Election, embracing certain policies and principles, did very well. Those that did not, say goodbye! Yesterday was such a very Big Win, and all under the pressure of a Nasty and Hostile Media!

This midterm was described as a referendum on Trump and his controversial policies, but the results are decidedly mixed.

With Democrats and Republicans both boasting of their successful nights in the House and Senate respectively, some Governor races are bound to be overlooked.

Stacey Abrams, the Democratic candidate for Governor in Georgia, appears to have lost to Republican Bill Kemp but has refused to concede until all votes are counted.

Georgia’s race could lead to a runoff if neither candidate receives 50 per cent of the vote.

The Democrats fared better in Wisconsin, Illinois and New Mexico, where they defeated Republican governors.

In Colorado, a milestone was reached, as Democrat Jared Polis becomes the first openly gay governor in the United States.

In his victory speech, Polis promised to represent all Coloradans, regardless of their party affiliation or ideology.

“There’s far too much at stake to let politics or partisanship get in the way of building the bright future … that every family deserves,” Polis said over the roar of his supporters.

With a partisan showdown shaping up in Congress, Polis’s message strikes a resonating chord.

Although Democrats and Republicans may disagree on a number of issues, today they share the same belief, that their own party was last night’s big winner.