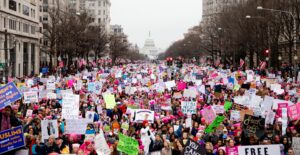 Queens N.Y. – Asked why she considers herself a socialist, Laura Shepard, a millennial supporter of Congresswoman-elect Alexandria Ocasio-Cortez, is simple and direct.

“Socialism to me means providing a bottom to society in which people will not fall through,” Shepard said.

She said socialism is about providing the basics for society, free healthcare, free education and the responsible management of natural resources.

Alexandria Ocasio-Cortez’s victory on Tuesday night for the Democratic Party, becoming the youngest female congresswoman in history, seems to be a huge boost for the ideas of her many young socialist supporters.

Ocasio-Cortez is seen as the most prominent of the new Democratic members of Congress promoting resurgent socialist ideas within the Democratic Party.

During her campaign Ocasio-Cortez advocated for  “Medicare for all”, housing as a human right and an end to the corrupting influence of corporate finance.

Many of these ideas are to the left of more moderate democrats who have dominated the party for at least the last 25 years.

A Gallup Poll taken soon after Ocasio-Cortez’s nomination last June reported for the first time that more Democratic Party supporters had a positive view of socialism at 57 per cent than capitalism with only 47 per cent having positive views.

As well, the same Gallup poll showed that millennials’ positive views of capitalism had dropped drastically from 68 per cent support in 2010 to only 45 per cent in 2018.

All of this is happening in a country that in the 20th century saw itself as the main bulwark of capitalism, violently opposing that close cousin of socialism, communism.

The U.S. supported various proxy wars across the world and was involved directly in the ‘containment’ wars of Korea and Vietnam in attempts to stop the spread of communist ideas.

Within the U.S. itself, public life was sometimes interrupted by ‘red scares’ such as McCarthyism, where government employees were persecuted and fired simply if they were suspected of having communist sympathies.

With such a history of ‘red baiting’, more Americans calling themselves socialist seems to represent a real change in the political landscape. 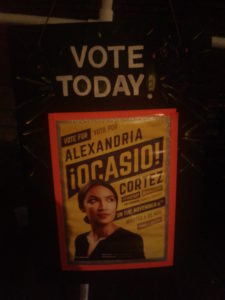 Some of this rehabilitation of the word ‘socialism’ probably has something to do with the Democratic Socialists of America (DSA) organization to which Ocasio-Cortez belongs.

Phil Henken, a member of the DSA electoral organizing committee said one common goal of the organization has been to rehabilitate the word ‘socialism’ itself.

According to Henken the top down authoritarianism of the Soviet Union that many Americans still associate with a bad socialism is widely rejected by the 50,000 members of the DSA.

Unlike some of the radical socialists of the past, the DSA rejects all forms of violence and sees “electoral politics as part of a toolkit for social change,” said Henken.

At the moment, the DSA is pushing to create a social democracy that invests in infrastructure with a robust safety net, very similar to Western European countries and Canada, said Henken.

To achieve this change though, Henken said the DSA thought that it was important that they support Democratic Party candidates who did not accept money from businesses.

“When you accept donations from corporations you will more or less have to do their bidding.” said Henken.

This is a big difference between moderate democrats like Hillary Clinton who have accepted money and DSA-supported Ocasio-Cortez who hasn’t taken money from any corporate donors.

A problem with this leftward shift of the Democrats is it might hurt them at the polls.

Ocasio-Cortez and Rashida Tlaib, the DSA’s most popular members won their congressional seats handily on Tuesday but many of their left-leaning allies in the Democratic party didn’t do as well.

No Democratic candidates endorsed by Bernie Sander’s progressive action organization Our Revolution flipped any congressional seats from Republicans at the midterms.

Candidates who were endorsed by Our Revolution and won their congressional seats such as Tulsi Gabbard of Hawaii, Raul Grijalva of Arizona and Deb Haaland of New Mexico won in districts that were already deeply blue with a Democrat incumbent.

Of the many Our Revolution congressional candidates that did run in districts with Republican incumbents such as Lisa Ring in Georgia, Liz Watson in Indiana and Ammar Camp-Najjar in California, not one took a seat away from a Republican.

By comparison, candidates endorsed by the moderate Democrats of the New Democrat Coalition congressional caucus pulled 23 congress seats away from Republicans on Tuesday.

As well the relative uptick in positive views of socialism among millennials doesn’t necessarily mean more American want a major change to their society.

When actually delving deeper into the same Gallup poll numbers, Americans as a whole are still fairly pro-business and nervous of greater government control.

As well, only 25 per cent of respondents thought there were too few government regulations on business.

It is still much too soon to tell if Americans are going to fully embrace a democratic socialist future or whether young Americans simply want more government help to pay for their education and health care bills.