The newly drawn ward 7 includes the previous Ward 7 and 8 with a combined population of 108,035.

This was done as part of Premier Doug Ford’s plan to cut back the number of representatives for city council to 25 from 45 in Toronto.

This new change has caused many candidates of different wards who may have worked on city council together to now run against one another.

Ward 7 includes the Jane and Finch area, a traditionally low-income neighbourhood that has been considered to have higher crime rates.

Many residents in the area worry about their apartments being torn down due to their age and subsequent difficult search for affordable housing in the city.

Community groups like the Jane Finch Action Against Poverty help fight against racial and economic justice in the area.

Mammoliti has made some controversial statements about the community, calling criminals who live in Toronto community housing “cockroaches”.

Mammoliti said in September to Jane-Finch.com that “much of our problems in our corridor Jane and Finch, is because we’ve lost our way; we’ve lost our family value way.”

Perruzza, 58, has also been representing the former Ward 8 since 2006 and now faces new territory with the new boundaries.

“Your black candidates don’t speak of how they will do that. They will just keep you bottled up in a poverty, segregated world with no hope,” Mammoliti said in reference to Ford.

Mammoliti’s comment was in response to commenters saying they wanted a change of leadership with a comment saying, “The angry white men have to go”.

Perruzza polled at 33.3 per cent, Ford at 20.5 per cent, and Mammoliti at 20.3 per cent on the final weekend before the election according to Mainstreet Research.

Perruzza told the Toronto Star citizens are looking for a candidate that is “connected to them…who’s going to take care of the issues that are most important to them.” 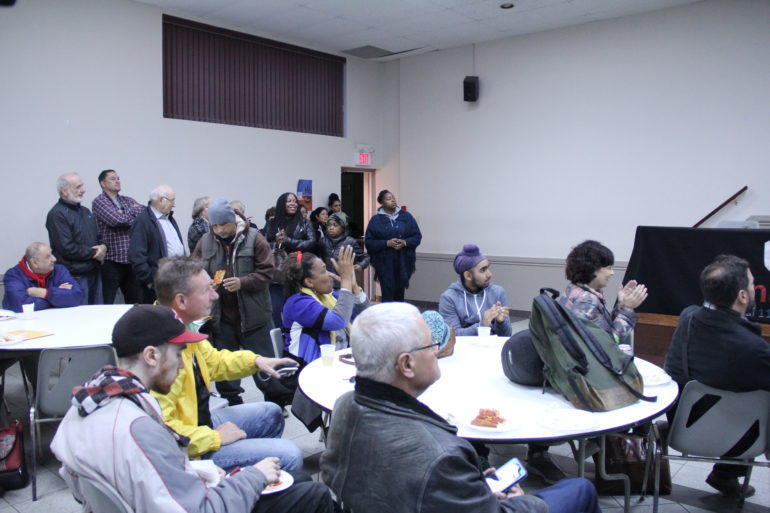 Perruzza’s supporters listen in on his victory speech. (Michelle Guo)

Ford, as the current Toronto District School Board Trustee for the region, wants to bring affordable housing and childcare, accessible transportation, and all ages programs.