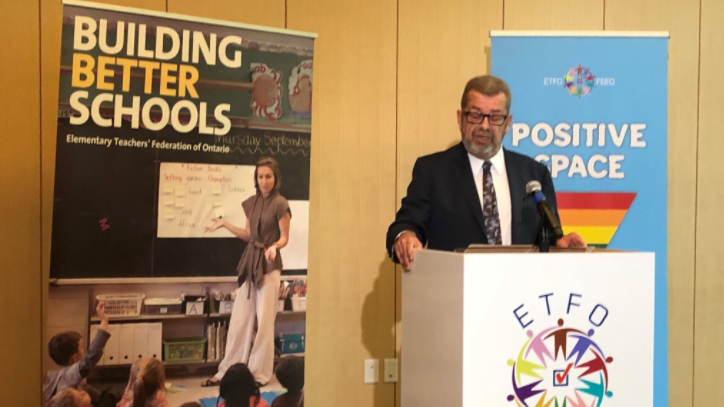 Sam Hammond, president of Elementary Teachers’ Federation of Ontario, announced the union will be filing an injunction today to challenge the Ontario’s government to repeal the 2015 health and sexual education curriculum. (Twitter/@ETFOeducators)

As children head back to school, a major teachers’ union announced it would be taking legal measures against the Ontario Progressive Conservative government’s repeal of the 2015 health and sexual education curriculum and their “snitch line.”

Sam Hammond, the president of the Elementary Teachers’ Federation of Ontario, said the union is seeking an injunction because the provincial government’s plan to use an interim curriculum based on material issued in 1998 is “an unprecedented and unnecessary attack on kids and professional educators.”

He said the union is fighting in support of the 2015 curriculum that was established by the previous Liberal government, which teaches students about consent, LGBTQ identities and sexual health in regards to technology.

“Students need and deserve modern day information and answers to their questions,” Hammond said. “This is about safety, inclusion and preparing students for the world of 2018, not the world of 1998.”

Last month, the PC government set up a new website that allows parents to anonymously make complaints if they suspect their child’s teacher is using material from the 2015 curriculum. The website is intended for parents with children in grades 1 to 8, as high school students will still learn from the newest curriculum.

The “snitch line,” as some critics call the website, “undermines the professionalism and integrity of the professional judgment of teachers,” Hammond said. “In a worst case scenario, this snitch line would allow anonymous parents, or anyone as a matter of fact, target any teacher for any reason.”

Legal counsel from Goldblatt Partners LLP, lead by Howard Goldblatt, will represent the union. He said the government’s decision to rescind the 2015 curriculum “violates…Charter rights and professional and ethical standards of teachers.”

Goldblatt said his legal team will be making the argument that the PCs are violating parents’, teachers’ and children’s rights of freedom under section 2(b), rights of liberty and security under section 7 and guaranteed equality rights under section 15 of the Charter.

“The Supreme Court has expressly identified that teachers are the medium for the transmission of values in our society and key actors in developing civic virtue and responsible citizenship in an environment free of bias, prejudice and intolerance,” he said.

Premier Doug Ford and Minister of Education Lisa Thompson have yet to respond to today’s announcement, and Hammond said ETFO hasn’t had any communication with Thompson after she was announced as minister.

When asked what the government should do about their website, Hammond said, “Take the snitch line down. It’s that simple.”