Lara Johnston, a School of Media Studies professor at Humber College, and Program Coordinator for the Post Production graduate certificate, edited a feature film that premiered at this year’sToronto International Film Festival (TIFF).

The film titled ‘Mouthpiece’, was the opening night film for the Special Presentations section at TIFF.

Directed by Canadian Patricia Rozema, the film adapts the award-winning two-woman play by Amy Nostbakken and Norah Sadava about an aspiring writer attempting to reconcile her feminism with the conformist choices of her mother following her mother’s sudden death.

Although the film wasn’t officially a Humber endeavour, Lara Johnston edited the film along with a graduate student as her assistant.

“Editing takes a lot of time so I took a semester off from Humber to edit. From January to April all I did was see the film, select the best takes and put them together.  I was also able to screen a rough cut of the film for my students last year to give them some first-hand experience,” Johnston said. 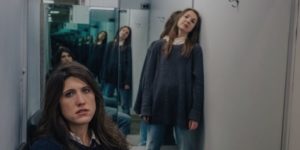 On her experience working on the film, she said it was wonderful working with the director again with whom she had worked 15 years ago as an assistant editor on another project.

“It was amazing working with the director again. She is really experienced and her awards are a testimony of the quality of work she produces,” she said.

Johnston worked in post-production since the mid 90’s before she started teaching at Humber seven years ago. She has worked all over the world including Hollywood, LA.

“Lara’s an amazing educator and mentor. Even beyond graduation, she has been an incredible support. It was pretty amazing working with her and Patricia Rozema, a director whose work I’ve been a fan of for years. It was absolutely one of the best experiences I’ve had assisting,” assistant editor and Johnston’s student Anna Catley said.

Mouthpiece is a film about Cassandra, who is portrayed by the two women, expressing the opposing voices that exist inside the modern woman’s head, during a 48-hour period as she tries to organize the affairs for her mother’s funeral.