I was raised my entire life to be an independent, self sufficient woman who was taught to reason through everything that life might throw at me.

So how did I end up in an arranged marriage?

Growing up in a traditional, conservative Gujarati  Hindu household, I have often seen a dominating patriarchal system prevail in our culture. It is often the father, as the head of the family, who decides the fate of the family. Women more often than not have no or little say in this.

My home was different.

A house where English was the preferred language of communication, where a 92-year-old great grandmother would read Perry Mason before bed, where grandparents were renowned educators who rendered honorary service after retirement, was one that did not fit into the normal conventions of society.

At 18, I defied all these ‘conventions’ and went on a cultural exchange program to Disneyland in Florida and worked at a steak house. Coming from a pure vegetarian family, I was at the centre of everyone’s gossip. 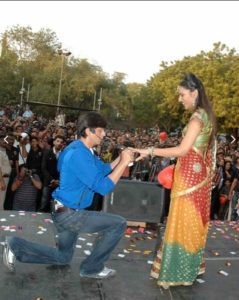 When Bollywood superstar Shah Rukh Khan and I shared a stage

When my peers were married off at the tender age of 21, my parents packed me off to go backpacking through Egypt on my own to taste the real world.

When menstruating woman were not allowed to enter kitchens because they were ‘impure’ during those days, my grandmother would hold my hand and teach me how to cook.

I was a stage and screen lead actress for two years before I came to Toronto as an international student to study Journalism at Humber. Several eyebrows were raised when I announced my plans to take up further studies at the age of 28 when my friends were producing babies left, right and center.

I still did what I deemed right – with full support from my parents.

I have never accepted a fact without analyzing it myself and to say the least, I have been my own boss.

Or that is what I thought until now.

It was about three months after the break up of a long-term relationship when I was asked by my family ‘what next’?

A few days later, I was sitting opposite a guy for a ‘marriage meeting’. 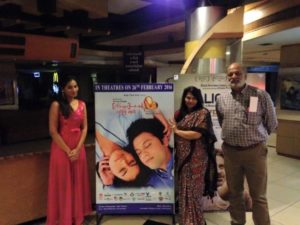 Let me tell you how arranged marriages work.

When two families are looking for a bride or groom for their son or daughter, they spread the word. Photos are exchanged and then horoscopes are matched. The photograph is the first impression of the potential ‘candidate’ and the horoscope is like a character and success certificate.

Much like recruitments are handled at multinational companies, parents or friends act as HR professionals to find the right candidate for the family.

I personally feel arranged marriages are a lot like online dating.

When you create an online profile, you try to sound fun, pen your hobbies, post a flattering photo and you hope someone clicks.

In arranged marriages, it is  your parents who pen your biography, make you sound super fertile, list their preferences, have an exorbitant portrait taken to cover that bald patch, make your skin look five shades lighter and parade you around hoping someone would take you.

So, when I found myself sitting opposite ‘candidate A’, a charming, intelligent, witty and confident dentist, I had to focus all my energies on not ‘liking him’.

For him on the other hand, it was love at first sight!

I had been prepared beforehand by family and friends about what kind of impression I must create. I was told to keep my mouth shut and answer only if questioned. I was warned to not let any independent or modern thoughts loose. I was to go dressed in traditional attire.

Dressed in a tight jump suit and heels, I greeted him with a hug (much to his horror) and was open about my thinking, my opinions and my perspective towards life. And still, it was love at first sight for him.

A much-needed ray of hope in this world of hypocrisy – honestly prevailed.

A breath of fresh air

Shripal Shah, a national award-winning dentist, had been bride hunting for half a decade before he sat opposite me on our arranged date.

“I had met over 200 girls in the last five years and had not found the perfect girl. She was traditionally Indian, but she was strong headed, confident, intelligent and rebellious,” he said. I guess that would turn out to be me.

In a culture where being a rebel can quickly label you a bad egg, my would-be groom’s attitude was a breath of fresh air.

“I trust my parent’s choice to have selected the right girl for me,” he said.

It was this one meeting that was to decide whether we would end up tied in holy matrimony or not.

He smiled as he asked me if I had any questions for him.

I threw caution to wind and asked him the most shocking question he would have been asked in his life. Ranging from his virginity status to his thoughts about intimacy, there was nothing I kept contained.

I asked him if he had anything to say or ask me.

“You are exactly like I saw in your pictures but only more beautiful in person,” he said.

“If this works out, it will be like I won the lottery,” he said as we parted.

I on the other hand asked him for some time to give me consent or otherwise. It was almost a month before I gave in.

“Indian women are often conditioned to be submissive and accepting. While not all of them are like that, that is the natural way they are supposed to go,” Lizma Thomas, a former counselor and psychology student said.

“The reason arranged marriages last longer is that there is too much pressure from families to make it work so genuine efforts are made. There is no other choice,” he said.

Willing to take the risk, but what about love?

A few days after our engagement

Of course, it is not the healthy way to go.

But I was willing to take the risk.

After all, from the candidate pool I had accessed, he did seem like the best catch for me. And luckily, he felt the same about me.

There was just one problem. Where was the love?

My grandmother –  with a double Master’s in English Literature and Teaching and a Master of Philosophy in History – said I would fall in love after marriage. I obeyed.

That was not something we were to worry about. We were to focus on getting to know each other and our families.

A couple of weeks later, we were back in India. The part where families had to meet was to begin.

They liked each other.

Two days later, we were engaged.

On a 26-hour-long flight from India back to Toronto, we had the best conversation of our life.

We were talking about our dreams, our likes, our dislikes, visualizing our future and desperate to reach Toronto to start dating!

We were both of the mindset that love cannot be arranged. We wanted to fall in love before we got married. It was important for us and we needed some time.

“She has a great sense of humour! She is understanding, caring, giving but at the same time she is one who refuses to take any nonsense from anyone,” Shah said.

I second these thoughts but was told to control my emotions before everything was finalised and the deal was sealed.

Since we both understood the consequences of falling for each other against the wishes of family, we kept our feelings hidden well. Now that we were engaged and away from the mollycoddling, we were looking forward to the alone time.

We thought of moving in, since life is super fast in this part of the world and thought it would be the best way to spend quality time.

Our parents felt we should not move in before we get married, an issue India is still struggling with.

“You are made for each other”, Phorum Vashi, a common friend and my wonderful roommate said when she met him first. When I asked her what she meant, she said time will tell. And little did we know, it would.

So here we are, getting married this week in Toronto and  moving in together next week.  Happy with the matchmaking efforts of our families.

Arranged marriages are not built on romance but that doesn’t mean couples do not have feelings for each other.

As a woman, I have been often conditioned that it is likely that I get a raw end of the deal and whether love or arranged, I would be the one who had to compromise the most, expected to ‘adjust,’ move cities, give up or negotiate my career and leave my family.

And for some strange reason, I have no logical reason to argue with that statement.

With a lot of love and help from thousand years of tradition and culture of India to save us if we ever need it, here we are on the verge of taking the plunge.