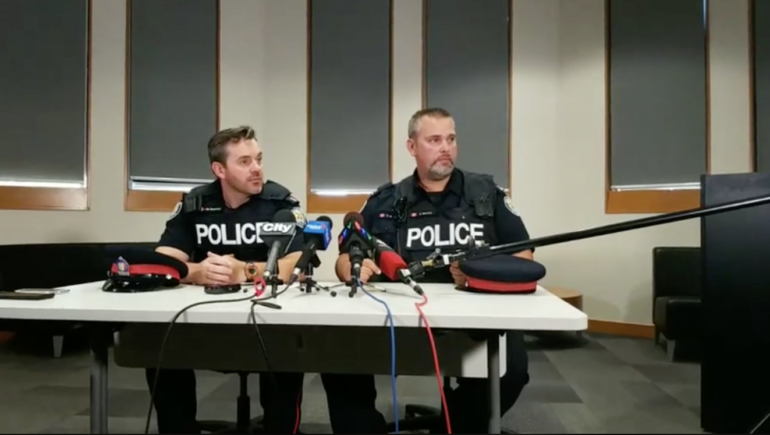 Consts. Josh McSweeney and Ryan Barnett said in a press conference today they could hear the victims screaming for help as they risked being drowned inside the elevator compartment at the Alliance Avenue building, near Rockcliffe Boulevard and Jane Street, as the water level rose.

Barnett said the duo, who patrol in neighbouring 11 Division, responded to the emergency call after completing an unrelated call at nearby Jane and Dundas Streets.

He said they immediately went down the stairs where they could see a high level of water.

“Once we started going down we could see how deep it was, because the door frame it was only exposed about two inches of the metal,” he said.

Barnett said the water level inside the elevator was so high that it only left the men with about four to six inches of air to breathe. The two men were standing on the waist-high railing to keeping their heads above the water, he said.

“We walked to the elevator and we could see the elevator at the bottom, at the basement,” Barnett said. “The hatch could only be opened about four or five inches and they could not get out.”

“We could hear them inside screaming for help, and saying the water was getting high and they needed us,” he said.

Barnett said a man passed him the key to unlock the doors of a neighbouring elevator, which gave them access to the lift where the two men were.

He said he and McSweeney tried to pull the doors open, but the water pressure made it impossible to do it.

McSweeney said while he went upstairs to get a crowbar for a second bid to rescue the men, the water had risen six inches within two minutes.

He said he spoke with the two men to keep them calm and that they were working to open the doors while Barnett jimmied the doors open with the crowbar.

“They immediately came out, they were dying to get out of there so they came out of the elevator and we just all make our way back to the stairs,” Barnett said.

McSweeney said they had less than a minute to rescue them and Barnett believes he got lucky to open the door.

“I went to bed and I couldn’t sleep, I was very excited and happy to save couple of people’s lives,” Barnett said. “It’s what we do this job for, we were just lucky enough that we were close enough to help them.”