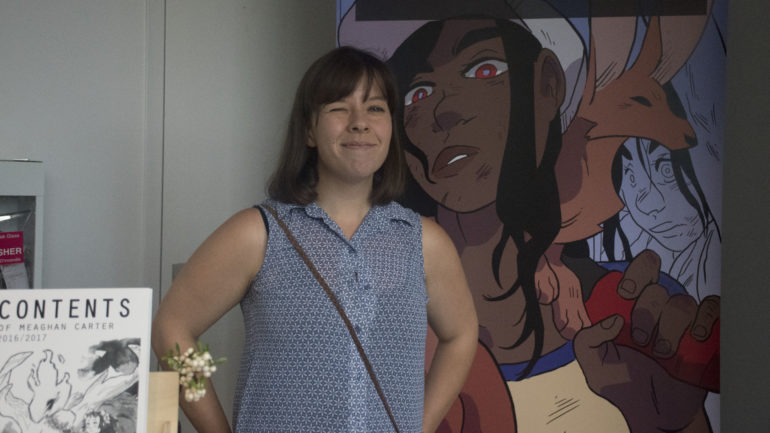 Every month, comic book artists excitedly discussed their work with each other in the middle of the busy Toronto Media Arts Centre venue, grateful for a safe space to showcase their work and make new connections.

The Centre hosts speaker socials and art and video game jams to unleash the talents of LGBTQ+ Torontonians.

Henry Faber, the Centre’s president, is a champion for representation and organizes creative spaces for the community. He said games have tremendous power in their ability to celebrate and normalize different identities.

“If there’s one thing that working in this community these past seven years has taught me is just how important representation is,” Faber said.

“We keep seeing the same faces, catering to the same people, controlled by the same hands with the cash,” he said. “Even professionally, I had been contributing to reinforcing this until I really examined the barriers that were present, both systemically and flat-out intentionally.

“Women, Black, Indigenous and people of colour should have their ability to tell their stories, work on projects and even perform through player expression supported,” Faber said.

The representation may seem insignificant to some but Faber said his community’s efforts are influencing larger and more popularized in-game stories like Assassin’s Creed Odyssey and The Last of Us 2, where the main leads are LGBTQ+ individuals.

“They recognize the important of representation, even if it’s sometimes myopically seen as a cash grab from a ‘new’ audience. But it makes a world of difference in influencing what comes next,” he said.

Project Solace, a graphic novel by Leisha Riddel, is a prime example of how the supportive community at the Toronto Media Arts Centre help artists succeed.

When Riddel was growing up, she was a huge fan of an Japanese animated series called Dragonball Z.

“But I always wanted more girls on TV,” Riddel said. “I could relate to the boys. I had to, but the lack of femme-presenting or female characters did wear on me even as a child.

“It’s become painfully obvious that the majority of writing covers ‘cishet’ (cisgender hetrosexual) experiences and that isn’t what everyone wants,” she said. “The queer community is tired of having to relate to people that aren’t them, even though we are fully capable of it.”

Like Faber, Riddel referred to Assassin’s Creed Odyssey and The Last of Us 2 as examples of positive and empowering representation.

“It’s timely to cover this as we’re just experiencing the announcements from E3, where Sony decided that it was ‘lesbians o’clock’ and made ‘America Gay Again,’” she said.

Riddel works full-time as a 2D artist for Sinking Ship Entertainment and takes commissions to cover the cost of living in Toronto but sneaks in every moment possible to work on Project Solace, an online comic series, because of the readers’ encouraging responses.

She recalled attending the Toronto Comic Arts Festival last year, where a young person of colour with short hair passed by her booth, flipped through her story and suddenly stopped dead on a page.

“I asked them what was wrong, and their eyes welled,”Riddel said.

“They were so happy to see Lisa, a big, buff brown woman who identified as a lesbian so prominently featured,” she said. “They kept skimming and discovered that the protagonist uses ‘they/them’ pronouns and they were ecstatic.”

“That sort of reaction is what makes me want to continue creating,”Riddel said.

When she first saw Sailor Moon, she didn’t realize how hungry she was for seeing a girl having a big adventure. She reflects this discovery in her work, which she describes as urban fantasies with aggressive female leads.

“I think for any girl, person of colour, LGBTQ+ person, or disabled communities — having that representation makes them feel a lot more powerful and a lot more beautiful,” Carter said. “I think that it’s important for anybody coming from any kind of background.”

Faber said the city is becoming enviable in terms of content creation because of numerous self-publishing comic book artists located in Toronto.

“A large part of that has to do with the art and digital media funding opportunities in Ontario through the Ontario Art Council and the Ontario Media Development Corporation,” he said.

“But a significant additional factor is the diversity of Toronto’s game makers and the very real steps towards inclusion that the community as a whole have embraced,” Faber said.