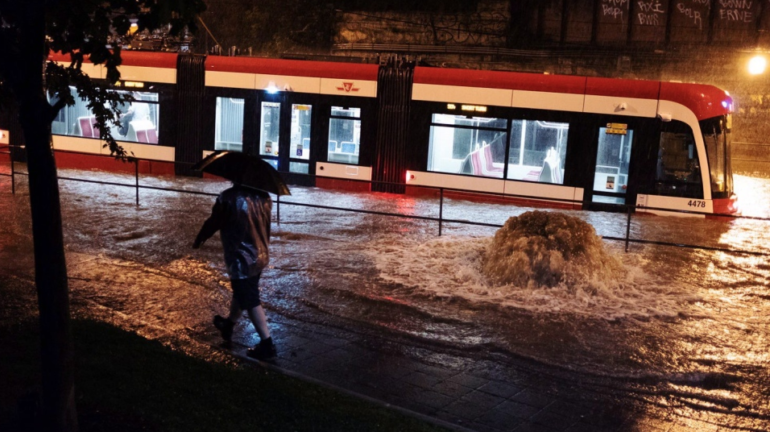 Toronto won’t get a chance to dry out from Tuesday night’s heavy rain and flash floods. More rain is forecasted for today.

The city was hit with flash floods and their effects are still being felt this morning in the form of delays, structural damage and power outages in the city.

The problems may worsen as more showers are expected in the next two days.

The TTC suspended service on Line 1, between Finch West and Wilson stations due to flooding. Shuttle buses are running instead.

Environment Canada issued a special weather statement Tuesday warning that some areas in the city could receive 100 mm of rain and predicted more showers today with a 60 per cent chance of rain with a risk of thunderstorm.

Toronto Hydro is working furiously to restore power to affected areas peppered throughout the city.

Crews were repairing the damage in the River-Gerrard-Queen Streets area and in the Davenport Road and Symington Avenue area where customers faced a power outage since last night.

Another 16,000 people were in the dark for about five hours yesterday due to an issue at the Finch Transmission Station that resulted in Toronto Hydro’s loss of power supplied from Hydro One.

Twitter users posted videos and photos showing the chaotic situation they were facing.

this is honestly NASTY. I’m covered in raw sewage, i’m itchy all over. The subway smells like raw sewage from it leaking from the streets above. This in unacceptable. @TorontoComms @CityNews @TorontoStar @CBCToronto @CTVToronto @blogTO pic.twitter.com/pIfpAXI0Fp

Union Station last night. Much better today I understand but please be careful wherever you’re walking especially on platforms. pic.twitter.com/eL0TupJ8re

At Roger Centre, the aftermath of the Blue Jays game was affected by a power outage and a leak through the roof.

April Engelberg, a candidate for Toronto City Council Ward 20, told Humber News she just saw the storm after the game had ended.

“People were waiting at the Rogers Centre for at least 45 minutes, waiting for the rain to die down or find some way to leave,” she said. “It was chaotic.”

I’m with thousands of @BlueJays fans waiting for the storm to settle before leaving @RogersCentre. Hope everyone is safe! #onstorm pic.twitter.com/Jz2EOOgRLu

Engelberg said the city needs to invest in proper drainage systems and people shouldn’t be expecting the city to flood when there is a heavy rain for one night.

“It’s been happening repeatedly, so we need to invest on it,” she said.

Toronto Police reported two people narrowly escaped were rescued from a flooding elevator. They were stuck inside it in a basement building at Alliance Avenue and Rockcliffe Boulevard around 11 p.m.  The water levels reached six feet and the two men had about a foot of air space to breathe before two officers swam to their rescue.

The officers used a crowbar to open the elevator doors.

Stairs to flooded basement in commercial building near St. Clair and Jane where two men were trapped in elevator.  That 7 foot high green doorway leads to the elevator where two Toronto officers had to swim to rescue the men. pic.twitter.com/3Chig2FBG5

Matthew Pegg, the Chief of Toronto Fire Services tweeted that in 24 hours, Toronto Fire responded to 714 emergency calls. It represents an increase of 131 per cent over the average number of usual calls based on the past three years.

From 7AM yesterday through 7AM today, @Toronto_Fire crews responded to 714 separate emergency calls. That is a 131% increase over the 3 year average “norm”. Thanks to all our crews and amazing dispatch professionals for their extraordinary work last night! @TPFFA

The police marine unit rescued people from four cars trapped by rising water at Bremner Boulevard and Lower Simcoe Street. Three cars were submerged in a underpass near Keele Street and Wilson Avenue.

Toronto Flooding – As water starts to subside we can finally see the 3 vehicles in the underpass at Wilson Ave near Keele St. #onstorm pic.twitter.com/k8J0VZFZq2

@CityNews Cars under the bridge at Dovercourt and Dupont, police and bystanders jumped in to save the person in the van. Everyone got out safely. Stay dry if you can! pic.twitter.com/8XusBeL8dY

Toronto Hydro is reminding Toronto residents that electricity and water don’t mix and if anyone is facing a flooded basement, power needs to be disconnected immediately to prevent shocks.