Toronto anti-racist groups protest the rise of the alt-right 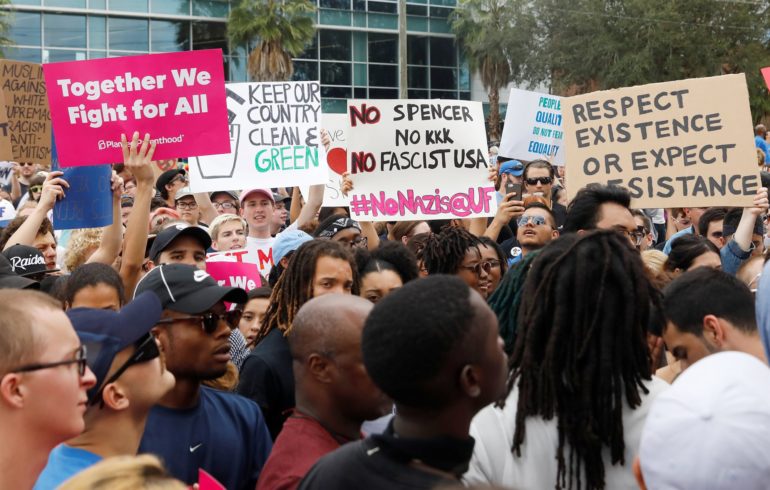 Protestors will converge at Nathan Phillips Square on Saturday. Protestors pictured above countered alt-right protestors in Florida in 2017. (Shannon Stapelton/Reuters)

Toronto’s Nathan Phillips Square will be ground zero Saturday for protestors rallying against the rise of the alt-right and hate groups in Canada.

However, groups calling themselves Soldiers of Odin, The Northern Guard, Proud Boys and others are expected to hold a similar alt-right protest in Toronto.

Counter-demonstrations are planned by anti-fascist and anti-racist groups, including the United Steelworkers’ Toronto Area Council (STAC) and the United Jewish People’s Order (UJPO)/Winchevsky Centre, who will hold a “Stop The Hate Rally!” at the Bay and Queen Streets square.

Lia Tarachansky, an education director of North York’s Winchevsky Centre, said the rally in Toronto, where far right groups are hoping to make their voices into the Canadian mainstream, coincides with the one-year Aug. 12 anniversary of Charlottesville, Va., where American alt-right and neo-Nazis rallied.

Protestor Heather Heyer was killed during that first Unite the Right rally. Many others were hurt, including DeAndre Harris, who was brutally assaulted by white supremacists in a parking garage next to the Charlottesville police station. Officers stood by and didn’t intervene during the attack.

“They’re hoping that since they’ve made their presence known since Calgary that they can now branch out to the Canadian mainstream,” Tarachansky said. A violent confrontation in 2017 outside Calgary City Hall pitted the far right and anti-fascist protestors where numerous fights were reported.

“My history shows that they’re based on racist ideologies and tend to first make a wave, and try to break into the mainstream,” she said. “You don’t just end up with a Nuremberg rally overnight. I think they’re testing the waters.”

Tarachansky said it’s important for groups in this city to unite and show hate groups that they’re not wanted here.

“We will stand together as others have stood with us when it mattered,” she said. “We hope that the Canadian public will join us.”

The Stop the Hate Facebook page stated “it is unlikely that the police will allow them to leave the Square if they will attempt to march through Toronto’s streets. We therefore anticipate a protest and counter-protest to both take place simultaneously at the Square.”

The protest on Saturday coincides with Shut it Down DC’s  protest on Aug. 12, called “Still Here, Still Strong”  in DC’s Freedom Plaza in the American capital. Two days before the event in Washington, organizers will hold a six-hour “action camp” to train those planning to protest on Sunday.

The alt-right groups said they plan to be present at the second Unite the Right event, which takes place later that afternoon in Lafayette Square behind the White House.

Tarachansky said these kinds of incidents scare her because those who follow the far-right ideology believe in violence and murder.

She said in a statement that STAC is proud to stand against the far-right groups after the world has seen a rise in what hate groups do throughout the world.

“We are proud to be taking part in the counter rally planned at city hall square and feel that it is very important that trade unionists join with community organizations to protest this bigotry,” Egan said.

“These organizations are trying to move the political spectrum to the right, dividing people one from another,” she said. “We believe that all progressive peoples should unite against this hate and work together to build a society with economic justice and equity for all.”

Tarachansky hopes police will not act with impunity against anti-fascist protestors as they have done in the past.

“As far as the police are concerned, it’s two sides of a political debate, and it can’t be portrayed as such,” Tarachansky said. “The police’s only concern is to keep people away, and keep the peace, so that’s from my understanding what they’d like to do.

“When they arrest or attack activists, they tend to do it disproportionately against protestors than against neo-Nazis, and that needs to be changed,” she said.

In a statement, a spokesperson for Toronto Police told Humber News they were aware of the event and, “like others, it will be attended by the Toronto Police Service to ensure the safety of all involved.”

“News of an anti-Islamic event being planned for Nathan Phillips Square on Saturday, Aug. 11, is a disappointing reminder that, as far as we have come as a society, many still cling to violent prejudice,” Wong-Tam said. “We must continue to come together in the spirit of cooperation and pluralism to show strength and solidarity with those being targeted.”

“As the Advocate for Newcomers, I am dismayed to learn that those who are gathered in a peaceful gathering of acceptance will be met by a group of people, who express views of intolerance and hate, will be rallying in Nathan Phillips Square,” Karygiannis said. “I trust that the two groups will remain peaceful.”

This isn’t first time Toronto has seen incidents of a hate-related nature this year. Police arrested two people in separate incidents over the past couple of weeks for using racially-charged language to harass people.

One man was charged last Thursday with two counts of assault and one for threatening death as part of “a suspected hate-motivated crime investigation” after videos surfaced of him hurling racial slurs at a family near the Jack Layton Ferry Terminal. In the other unrelated incident, a 19-year-old woman was charged with robbery in a racially charged confrontation on a TTC subway on July 28.

Tarachansky says incidents such as these is exactly why Jewish people are lending their support to help immobilize this because “fascism against any group is still racism as it’s based on white supremacy.”