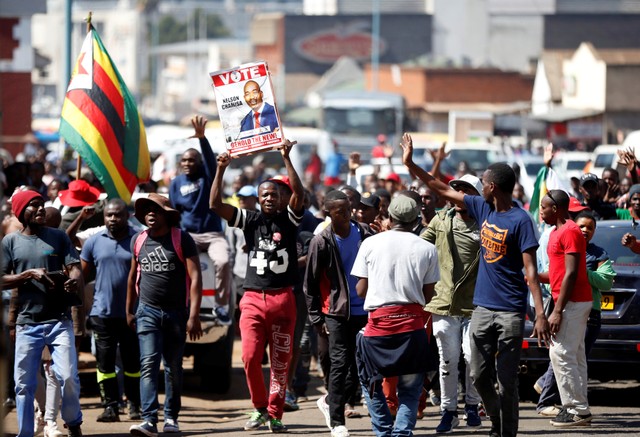 Zimbabweans voted for the first time since gaining independence in 1980 without Robert Mugabe on the ballot. (REUTERS/Siphiwe Sibeko)

The results of Zimbabwe’s first presidential race since ousting longtime dictator Robert Mugabe have yet to be confirmed two days after the Monday election.

While results indicate the ruling Zanu-PF controls a majority in the 210-seat parliament, the country’s election commission announced the winner of the presidential race will be named Thursday.

The delay triggered protests from supporters of the Movement for Democratic Change (MDC) party, the main opposition party to the Zanu-PF.

The country’s election commission has five days from Monday’s election to announce the results. A runoff vote will be held Sept. 8 if no presidential candidate wins more than 50 per cent of the vote.

More than 5.5 million Zimbabweans voted in the election featuring more than 20 presidential candidates and nearly 130 political parties, a record for the African nation. It’s considered the first free election since Mugabe, 94, widely accused of repression and mismanagement during his 37 years in power, stepped down under military pressure last year.

The two main contenders are Zanu-PF candidate and President Emmerson Mnangagwa, the former deputy president who replaced Mugabe, and MDC candidate Nelson Chamisa, a lawyer and pastor who became its leader after last year’s death of its leader Modan Tsvangirai of colon cancer.

Chamisa said reported voting delays were a “deliberate attempt” to undermine his supporters. His allegations intensified concerns about the management of the election.

The European Union observer mission monitoring the Zimbabwe election has wondered openly why the presidential results were the first counted but have not yet been shared publicly.

Ruvimbo Mutangadura, a Zimbabwean and an African Studies research assistant at the University of Toronto, told Humber News the results of previous elections were clear to everyone even before the official result, especially after the 2000 elections where Mugabe admitted that he lost, but still asked to maintain the presidency.

“I think a lot of people had just lost hope in the electoral system and the country in general,” Mutangadura said. “Until this year though, because the new president decided to make this pledge to make elections (impartial), that is debatable still on whether or not it’s free and fair.”

She said there apparently wasn’t any instances of intimidation or attempts to influence votes by military police during Monday’s vote. This created an atmosphere where people were more open to express support for opposition parties, Mutangadura said.

Michelle Gavin and Todd Moss, former U.S. diplomats, wrote in the July article Zimbabwe’s Upcoming Election Is a Political Charade in the magazine Foreign Affairs that the country saw millions flee during the past two decades.

“The vast majority of those who stayed have seen their standard of living decline dramatically, and over 70 per cent now live in poverty,” they wrote.

Mutangara said some things have gotten a little bit worse.

“With the cash crisis…it was a lot more exacerbated when I was back these last few months, where people are cogitating not even going to banks anymore, but conducting kind of black market exteriors to try to get cash,” she said. ”Cash is in such a short supply and circulation.”

However, Mutangadura, who went to Zimbabwe in November 2017, said people feel more secure about their ability to be more open in discussing politics without fearing for their lives.

“This isn’t to say that people are not trying to hold back and still being cautious about what they say,” she said.

Mutangara said more people want to see a change and someone else heading the country and restoring economic prosperity.

“Regardless of who comes out, we need to realize the extent of the damage of the crisis in the country and how it’s now going to be an easy fix, regardless of who has the best intentions to become the president and lead the country,” she said.