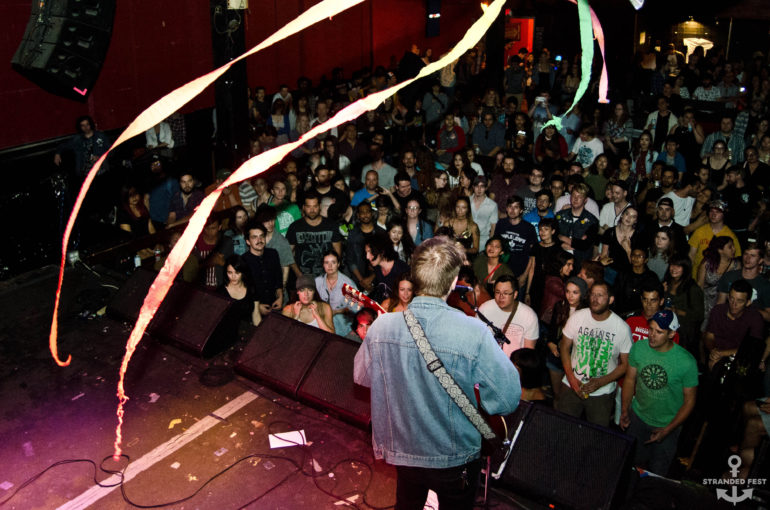 After two sold-out shows at Lee’s Palace in 2016 and 2017, Stranded Fest will find a new home at the Opera House this year. (Photo credit: Cassandra Popescu).

Toronto found itself lacking an alternative or punk rock summer music festival in 2016 as both the American-run Riot Fest and Warped Tour skipped their usual trip north of the border.

Martin Perez and Zachary Richman, two Humber College alumni, said they felt that created a gap in the local music scene they loved. A potentially large audience in Toronto was left without a major summer rock show in their hometown.

“The city was no longer getting its fill of the punk and punk rock and the pop punk scene, which was a problem,” Richman said. “It was that feeling like Toronto had been stranded that got us to want to make something that would help remedy that.”

The solution the two band members came up with was to put on their own set covering songs by Ontario pop punk band Sum 41, who were part of that year’s Warped Tour skipping Toronto. Once they started planning the concert, more bands expressed interest to join them, each picking their own artist to cover.

Perez and Richman’s idea snowballed from there. Soon they compiled a lineup of Ontario bands covering other artists, secured a venue at Lee’s Palace and sold out their first concert. The result was Stranded Fest, their own homegrown summer music festival, which returns this Saturday night at the Opera House.

The 2016 graduates of Humber College business and advertising programs first met in a Humber elective class on social media advertising before eventually starting a band and then an entire concert series together. That business background has been a strong suit for the pair in becoming first-time concert promoters.

“We both have a keen sense of what makes good messaging when it comes to promotion and how to get that messaging in front of the right audiences,” Richman said.

To Perez, what resonated with fans in their first year was their clear messaging about how Stranded Fest would step up and take the place of these summer festivals that weren’t returning to Toronto.

“Toronto doesn’t have these two major rock music festivals in town anymore, let’s make our own,” Perez said, explaining their idea. “It’s grassroots local bands of course doing covers of these huge acts, but it’s at a local venue with people from the scene. And I think that really hit a chord with a lot of people.”

Stranded has filled the niche of an annual festival of cover acts and has been able to stand on its own two feet despite Warped Tour returning to Toronto this year for it’s final tour. Now the concert highlights the rare opportunity to see talented local artists playing cover sets of superstar rock bands for one night only.

“It really sets the events up to be a once-in-a-lifetime opportunity,” Perez said. “You’re probably never going to see Seaway, who are our headliner this year, do a Weezer set again. You’re never going to see the guys from Pkew Pkew Pkew, who’s a super hot up-and-coming band from the Toronto scene, do the Clash cover set that they did last year, ever again.”

Stranded Fest has grown into an annual event, moving to the Opera House, which offers a capacity audience size nearly twice as large as Lee’s Palace. Perez and Richman have taken advantage of their concert’s popularity to schedule smaller, more niche genre-specific concerts throughout the year between their major summer shows to test new ideas and see what resonates with their audience, like Ska Night or Emo Night.

Through the last couple of years, the Humber alumni have been committed to a slow, organic growth, that has packed sold out venues, brought large audiences to local artists and entertained a Toronto fanbase once starved for summer rock festivals.

“There was really a feeling of being abandoned. Everyone had massive FOMO [fear of missing out] essentially,”Richman said. “I think that’s why Stranded Fest has resonated with a lot of people, because everyone felt on the same page. We’ve lost something, something’s missing in Toronto and this is kind of the solution to that.”