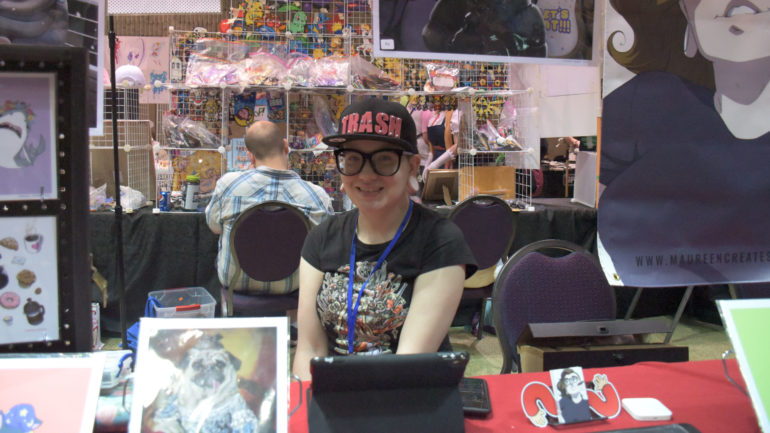 Maureen Hiebert, of Ottawa, was one of many artists in attendance at ConBravo, a geek culture convention held over the weekend in Hamilton. (Amy Chen)

In her original portraits, she dresses them up to look like historical figures. It’s an extension of what she loves to do: draw. She also mixed her passion for games with her art style by making prints for games like Overwatch, The Legend of Zelda and Five Nights at Freddy’s.

Hiebert showcased her work at ConBravo, a celebration of gaming and geek culture in the Hamilton between July 28 to 30, highlighting the talents of cosplayers, artists and developers of every calibre.

She said the convention let her showcase some of these original pieces featuring pugs, which ended up being her best-sellers. She said her portrait of a pug being dressed as Marie Antoinette is her magnum opus.

“That means a lot to me and it makes me feel there’s a chance to do what I want for a living,” Hiebert said.

Artist Madison McKnight at her booth at ConBravo. (Amy Chen)

Like Hiebert, artist Madison McKnight said creating artwork for games and their characters have been a long-held passion. She started in the convention scene about three years ago and attended ConBravo for the networking opportunities.

Her favourite part of any convention is the trading with fellow artists, which comes at the very end when attendees and guests have left the show floor.

“We’ll bring our books around and be like, ‘Do you want to do a trade?’ There’s a lot of that sharing and trading of each other’s art,” she said.

McKnight is currently on the waiting list as an artist to appear at Fan Expo, Toronto’s largest fan convention, and is looking forward to attending EGLX, a Canadian video game expo, in October.

Artist Jess Sayago also got to mix her passions together and later develop her own unique art style.

“I get to be where other artists can showcase their stuff and can form connections with them,” she said. “It’s a really good place to share your interests and passions.”

In particular, she loves Overwatch, a first-person shooter game, because the female heroes are diverse in their abilities and appearances.

“Overwatch is a really colourful game, so it’s helped me recognize my colouring style,” she said.

Sayago recalled getting a “really bad How to Draw Manga” kids book when she was little.

“I thought it was the best thing ever,” she said. “I was copying and drawing a style of it for years into high school and it encouraged me to start doing art seriously.”

ConBravo also brought together cosplayers who dressed up in costumes of their favourite characters. They chatted amicably with artists, game developers and other cosplayers as they explored the Hamilton Convention Centre’s show floor.

Other attendees shouted character names while rushing up to cosplayers, hoping to get a photo.

Luxlo at ConBravo cosplaying as Makoto Niijima from the game Persona 5: Dancing in Starlight.

One of the special guest cosplayers was Luxlo, who dressed up as a character named Makoto Niijima from the game Persona 5: Dancing in Starlight. Luxlo, which is a stage name, has been attending conventions since 2012 and said she is passionate about sharing her love for different characters of her favourite games.

“I just love the games so much that I’m like, ‘I wanna be you, I wanna be you,’ and bring the characters to life,” she said. “When I started cosplay, I never would have thought that I would be able to take me this far.

“That I would get to travel and have the honour of being a guest and judge masquerades and meeting new people who share this very niche hobby. It’s so amazing,” Luxlo said.

Her next convention will be Toronto’s Cosplay Matsuri, a one-day convention located at the Ontario Science Centre on Aug. 18.

Another cosplayer at ConBravo was Ralph de Casdro, who dressed up as Soldier: 76 from the Overwatch video game.

“Overwatch is my first first-person shooter game that I played, and I really like the design and all the characters,” de Casdro said. He said Soldier: 76 is one of the characters he enjoys playing as in the game and was glad to come to ConBravo to share his passion.

Amanda Cicero, who has been cosplaying at ConBravo since 2011, agrees. She dressed up as Elizabeth Liones, a main character in the Seven Deadly Sins anime, and in past years dressed up as Sailor Venus from the Sailor Moon series, Lara Croft from the Tomb Raider series and various characters from the Soul Eater anime and manga series.

“I like the people that I meet when I wear the costume,” Cicero said. “I get to socialized with a lot of really cool people.”

At another corner of the event, independent game developers also socialized with attendees in the form of direct community feedback.

“Women don’t get many games aimed at them and queer men get even less,” Solis said. “So it’s important to give them representation.

“The worst thing that happened to me was that there’s this guy who was super interested in the company, but once I handed him my business card, he said, ‘This is obscene.’ That is a direct quote. ‘This is obscene,’ and he gave it back to me,” she said.

“It’s one thing that they don’t like it, because people have different tastes, but when they don’t even accept it, it feels really bad,” Solis said.

She said in her experience, many women and queer men are interested in the creative industry but they don’t think it’s possible to earn a living out of it. By visiting Canada and introducing her game to more open-minded people, she hopes to change this outlook in Mexico when she returns.

Mega Power Games developer Antonio Miceli found the attendees to be receptive with its game Depowerball.

Between the time he was at the Microsoft Store’s Indie Dev Day event a few weeks ago where the game was showcased, and ConBravo, his studio made significant changes to the game based on feedback. These changes included adjusting the controls of the game, as well as the character selection process.

“It’s a little thing, but it makes a big difference in terms of the user experience when somebody comes to play your game,” Miceli said.

“My favourite moment is when groups of friends come and play and watching their friendship ‘deteriorate’ as the competition heats up as they’re playing. And I love watching them just go at it, because that’s the intent behind the game,” he said.

Fernando Restituto, the developer of Grid Legion, a strategy game inspired by other games like Dota 2, Starcraft 2 and Magic: The Gathering, also attended the Hamilton show for feedback on his game.