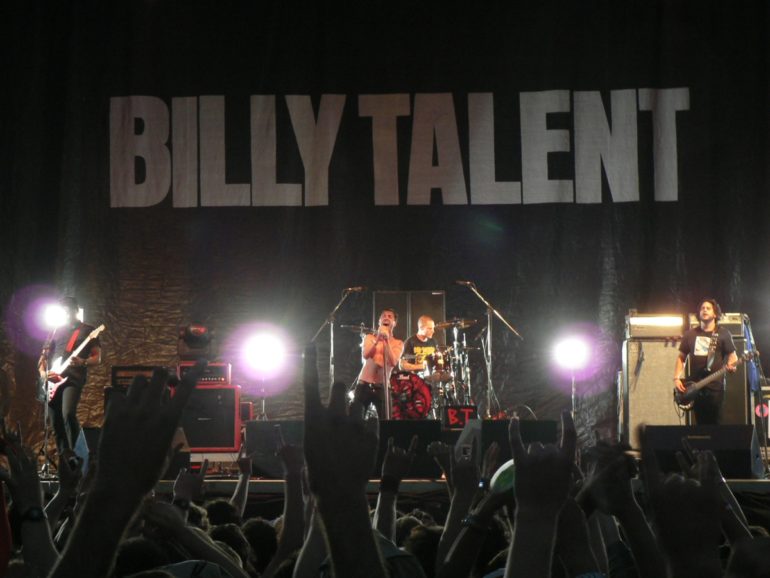 Toronto Together: Canadian rocker Billy Talent and friends will be playing a benefit concert for #torontostrong and victims of the Danforth Avenue attack. (Instagram – @billytalentband)

Canadian rock band Billy Talent will be hosting Toronto Together, a benefit concert with all proceeds going toward the #TorontoStrong foundation on Aug. 11.

The concert will take place during the community’s largest event of the year, Taste of the Danforth. Patrons from around the city will come to the famed street to celebrate and taste the many treats and eats Greektown has to offer.

The concert lineup includes a list of Canadian bands coming together to raise funds for the victims of the deadly attack in the Danforth and Logan Avenues area that took the lives of Reese Fallon, 18, of Toronto, and 10-year-old Julianna Kozis, of Markham.

Both victims were buried on Monday. Toronto Police said 13 others were wounded in the July 22 attack by lone gunman Faisal Hussain, 29, of Toronto. He died in the attack, but the Special Investigations Unit have not yet announced whether it was a police bullet that killed him or if he killed himself.

All proceeds from the concert will be given to the #TorontoStrong foundation. The City of Toronto and the Toronto Foundation partnered to establish #TorontoStrong within days after the van attack on Yonge Street near Sheppard Avenue on April 23 to coordinate donations from charitable donors around the world.

Ten people were killed in the attack. Alek Minassian, 25, of Richmond Hill, was arrested by Toronto Police faces 10 counts of first-degree murder.

The #TorontoStrong Fund will allocate donations to the victims of the Danforth shooting. Great initiative from @BillyTalentBand. https://t.co/bIVJEVHKrd

After the shooting on the Danforth the foundation opened a designated account for victims and families of those affected by the shooting, #TorontoStrong spokesperson Andrea Martinelli said.

The foundation ensures all donations are directed to the victims of the attack, she said.

Reese Fallon, 18, of Toronto, was one of two victims of the July 22 shooting. (Facebook)

“Following the distribution of funds to the victims, the steering committee will also offer recommendations for longer-term strategies related to the city-wide impact of this tragedy, as well as violence prevention and mental health supports,” Martinelli said.

Martinelli said the community has been charitable and supportive of the Greektown victims.

“Over the past few days, the #TorontoStrong Fund has seen a generous response from Torontonians, corporate donors and the Danforth community,” she said.

The show will be held at the Danforth Music Hall, just steps away from scene of the tragedy.

Concert goers can expect to see headliners and organizers Billy Talent, City and Colour, and Toronto locals Pup along with a number of unlisted surprise acts.

In a statement announcing the show, the band stated said the event hit close to home. The shooting took place just a few blocks from the band’s studio.

“All we know is that we can’t just sit here. We don’t know what we want but we want to do something. We want to throw a concert to show the world and more importantly our community that Toronto is a place of love, of community, of kindness and compassion,” the band wrote.

In its announcement, Billy Talent issued a call to action to Toronto to band together and support the victims and their families.

“Let’s raise money for the victims and their families,” the band stated. “Let’s get the artists and people of the city to stand together. While none of us have all the answers we feel we need to make a start. We need to help, but let’s [expletive] do something together. Let’s get the powers that be together. Let’s do something special for our city and all the amazing people that live here and deserve to be celebrated,” the band said.

The call was answered when tickets went on sale Wednesday morning at 10 a.m. and in an outpour of support the 1,500-seat venue sold out within an hour.