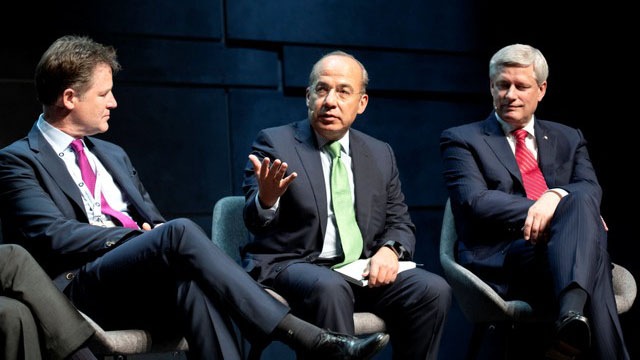 Harper’s visit to the White House came as a shock to all when the Canadian Embassy was alerted the meeting would be taking place.

According to American media, Harper visited White House economic adviser Larry Kudlow. The only meeting Harper publicly confirmed, however, was the one with Bob Paduchik, the co-chair of the Republican Party.

“Harper really isn’t involved in the Canadian approach here,” said Christo Aivalis, a social sciences and Canadian politics expert at the University of Toronto. “Harper in this case is certainly not approaching [the White House] as someone who is representing Canada.

“People might think he is because he’s a former prime minister and a recent prime minister, but the reality is that Harper seems to be going as an individual,” he said. “Or maybe he’s representing some of the business interests he currently has.”

Harper served as the 22nd Prime Minister from 2006 to 2015. After leaving politics, he started Harper and Associates Consulting in December 2015, a corporation that allows him to utilize his experience as a former G-7 leader.

The company’s website says Harper uses the firm to offer market advice and assess economic risk on a global scale to clients across the world.

He also has an forthcoming book called “Right Here Right Now,” set to release on Oct. 18. It discusses his experiences in politics in this day and age across the world.

Harper is also the chair of the International Democratic Union, which provides a platform where parties can discuss and exchange ideas to learn from each other and work together.

Aivalis said Harper was very quiet and didn’t really involve himself in last year’s Conservative Party leadership race, so there was a hint he was going to retreat into the lime light.

“He’s been going to conferences in the United States and made comments saying that if he wanted he could have stayed as a Conservative leader and has been much more vocal,” he said. “Him going to the White House is a signal that he is not going to retreat from public life.

There has been no official word from Harper or his representatives as to why he visited the White House.

Amid the trade war between Canada and the United States, this meeting raises questions about Harper’s involvement in the White House.

“In terms of Harper, it could be seen as difficult to gain traction in Canada because currently Trump is seen as extremely unpopular, and at least as far as the Conservative Party goes, they don’t want to be seen as taking Trump’s side in the current trade war,” Aivalis said.

“It’s certainly noteworthy. He might be willing as an individual to take a pro-Trump stance than be popular among Canada even amongst some conservatives,” he said.

Harper did not notify the Canadian government about the visit.

“There’s not much we know. Maybe he’s trying to do some good and trying to get the American president to understand Canada’s position [in the trade war],” said Grace Skogstad, professor of Political Science at University of Toronto Scarborough.

The Conservative Party has come out supporting the Liberal government on its trade position. There is an all-party consensus where all of the three major Canadian political parties support the view of Trudeau.

Harper appeared on Fox News on June 10, where he was seen defending Canada in the trade dispute.

“Canada is the biggest single purchaser of U.S. goods and services in the world,” Harper said. “It’s not China, it’s not Mexico, it’s not Britain, it’s not Germany. It’s Canada. It just seems to me that this is the wrong target.

“I don’t think even Trump supporters think Canadian trade relationships are a problem,” he said on Fox News.

Skogstad said to date it appears Harper hasn’t said anything that undermines Canada.

“It would be surprising if he were to say something about that now,” she said.