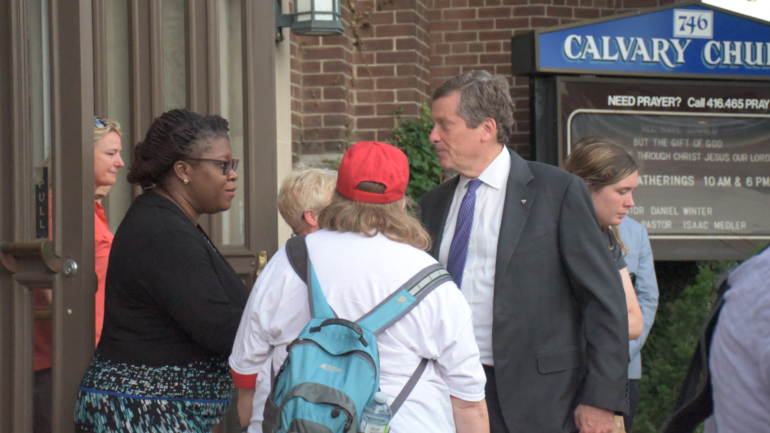 Mayor John Tory outside of Calvary Church on Pape Avenue north of Danforth Avenue speaking with people who attended a prayer vigil for the two killed and 13 wounded by a gunman in Greektown on Sunday night. (Amy Chen)

Residents of Toronto’s Greektown area gathered for a prayer and a march of solidarity tonight after the mass shooting that left three people dead and 13 injured.

The gathering at Calvary Church on Pape Avenue north of Danforth Avenue, where area residents sang Amazing Grace and It Is Well With My Soul. Elsie Dickson, who was at the door greeting guests, told Humber News the service also offered residents a quiet place for prayer.

There was a steady stream of people entering and leaving the church throughout the hour-long vigil.

Scott Bradley, a Danforth resident, stood outside the church with his dog, Rosie, as they reflected on what happened last night.

Evadne Kelly with her family outside the Calvary Church. (Amy Chen)

“I think it’s just tragic how it happened so close to my house,” Bradley told Humber News. “My heart goes out to the 10-year-old girl and the 18-year-old girl.

“Their lives, just taken away too soon. It’s just a tragedy that I think our whole city has to come together on,” he said.

The gunman, identified as Faisal Hussain, 29, was killed following a confrontation with Toronto Police after the shootings began around 10 p.m. Sunday. The Special Investigations Unit is investigating to determine how he died.

Reese Fallon, 18, of Toronto, and Julianna Kozis, 10, of Markham, were killed. Their deaths are being investigated by Toronto homicide detectives. Police said 13 other victims ranging in age between 17 and 59 were wounded with injuries described as minor to life-altering.

“This is our home,” said Radmila Prostran, another resident of the area. “This is where we live, and it’s very tragic.

“We feel devastated for the young lives and our children who are growing up in this neighbourhood. But we still do love our Toronto and East York,” Prostran said.

Evadne Kelly, who came out of the church after singing Amazing Grace with her family, was in tears when she spoke about all of the lives that were impacted by the shooting.

Reese Fallon, 18, of Toronto, was one of two victims of the shooting Sunday night. (Facebook)

Kelly and her family have lived in the neighbourhood for 20 years and although she wants her children to know what happened, she also wants them to not be afraid to keep living and playing in the city.

“I feel really sad, and I hope that everybody that was impacted feels better,” her son Egon Kelly, 9, said.

Mayor John Tory came out of the church after the vigil and spoke with residents, saying the gathering was all about love and praying for all the people — especially the victims.

“Our hearts go out — continue to go out to the people who are victimized by this,” Tory said. “Those who lost loved ones and those who are recovering in hospital and those who are traumatized by what they saw last night.”