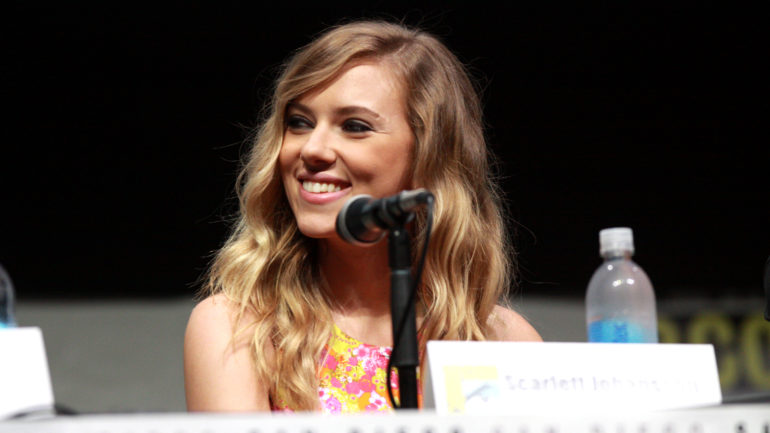 Scarlett Johansson is facing backlash for another controversial casting choice, this time for playing a transgender man in the upcoming biopic Rub and Tug. (Via Flickr @ Gage Skidmore)

Actress Scarlett Johansson is facing another backlash for being cast as a transgender man in an upcoming biopic.

The film, entitled Rub and Tug, is the story of Dante “Tex” Gill, a biological woman who dressed and lived as a man and was described as a “transmasculine crime boss.”

This isn’t the first time Johansson has faced backlash for a casting decision.

The actress was criticized for taking on the role of the “Major” – whose name is Motoko Kusanagi – in the live-action adaptation of Ghost in the Shell, a film based on an anime series of the same name. Johansson and director Rupert Sanders (who is also directing Rub and Tug) were accused of whitewashing a character that some fans believed should have been of Asian-descent.

Rub and Tug will focus on the notorious life of Gill, who ran a number of massage parlours that fronted as prostitution rings in Pittsburgh in the ’70s and ’80s.

When faced with the casting criticism, Johansson released a statement via a representative.

“Tell them that they can be directed to Jeffrey Tambor, Jared Leto, and Felicity Huffman’s reps for comment,” her statement said.

Johansson’s statement refers to other cisgender actors that have played transgender characters and were revered for their performances.

People took to Twitter to slam the actress for her casting and response.

Actors who are trans never even get to audition FOR ANYTHING OTHER THAN ROLES OF TRANS CHARACTERS. THATS THE REAL ISSUE. WE CANT EVEN GET IN THE ROOM. Cast actors WHO ARE TRANS as NON TRANS CHARACTERS. I DARE YOU #RupertSanders @NewRegency #ScarlettJohansson https://t.co/RkrW8MeGcG

What’s next? Is Scarlett Johansson going to play Barack Obama?

Yeah, I’m gonna avoid Scarlett Johansson movies moving forward after her response. Even if this topic were complex (and it’s not: trans people should play trans people), flippantly dismissing concerns over this new role really says a lot about her views regarding trans people.

Others were quick to defend Johansson’s casting.

Not really sure why Scarlett Johansson playing a trans individual is a problem. If people can only play roles that represent them, LGBT actors will have a lot less roles.

Scarlett Johansson can play any character, I don’t care. If she plays a trans man, fine. As a trans person myself (female to male) I have no problem with it. Leave her be, guys, it’s just a film role. #ScarlettJohansson

Why is everyone complaining about #ScarlettJohansson playing a Trans man in her new movie? You can’t pick and choose there are so many movies released with African American characters played by white people, white characters played by Black Characters and Men who play Trans Girls

Other cisgender actors such as Matt Bomer, Elle Fanning and Eddie Redmayne have also portrayed transgender characters in recent films and have all received backlash.

“I can’t say I’m surprised because this is a very common thing that happens, a lot of films that have trans-identified folk, they usually have cis-identified people playing them, and they’re usually big actors,” they said.

Dawkins also felt Johansson was deflecting the backlash when she issued a statement.

“Just because someone else has done it doesn’t necessarily mean that it’s okay to do it, in fact I think if she did her research in seeing how people actually reacted to the movie and how they realized it was a cis-actor playing a transperson and how upset they were, I think she should take responsibility for that,” they said. “She’s in a space where she’s kind of using her privilege to her advantage.”

Dawkins also offered advice to Hollywood for how it can be more inclusive in its casting decisions.

“The simplest answer is just not to be afraid to take up small actors, and I think there’s so much concern about if it will get enough views, if it doesn’t have a big-wig actor, but there’s very indie queer Netflix shows that do really well,” they said.

“For the most part they just need to reach out to actual communities instead of just going to these bigger celebrities,” Dawkins said.

“What issue could there possibly be with casting her? The Major is a cyborg and her physical form is an entirely assumed one,” Oshii said.

“The name ‘Motoko Kusanagi’ and her current body are not her original name and body, so there is no basis for saying that an Asian actress must portray her,” he said.

Johansson also responded to the whitewashing controversy at the time.

“I certainly would never presume to play another race of a person. Diversity is important in Hollywood, and I would never want to feel like I was playing a character that was offensive,” she said.

Johansson was previously seen in Marvel’s Avengers: Infinity War and is currently filming Taika Waititi’s Jojo Rabbit which is expected to be released next year.