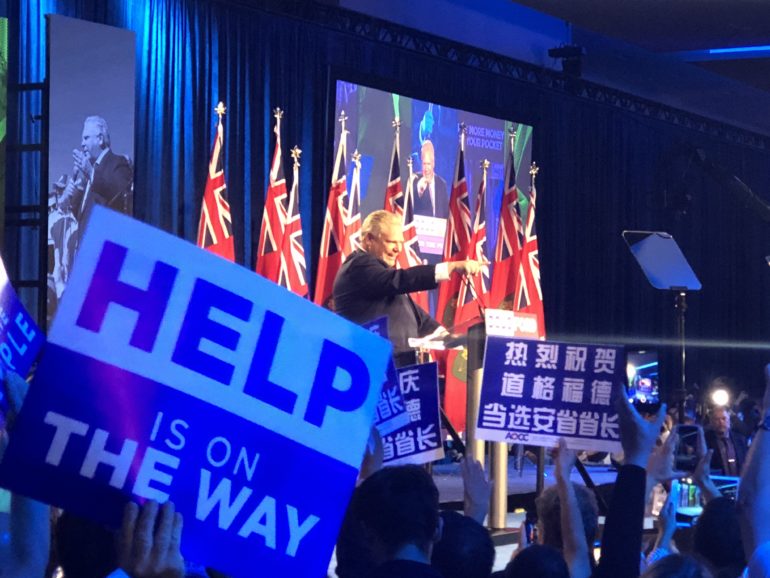 The new government gears up for its first question period. #onpoli pic.twitter.com/n29dhkp3sp

The new provincial government is stirring up confusion over their inconsistent take on the sex-education curriculum.

The PC’s claim they’re aware concepts such as consent, cyber safety, gender identity, sexting, luring and cat-fishing are a part of the realities today’s youth face. Nonetheless, they said they will still be using a curriculum from 1998 for incoming students this September.

Education Minister Lisa Thompson told the legislature at the first Question Period during the special summer session at Queen’s Park yesterday that students will be taught an old sex-ed curriculum from 20 years ago this fall until further consultation is completed.

“People deserve a premier not beholden to lobbyists and insiders and who tells the people of Ontario exactly what he’s up to,” said Opposition Leader Andrea Horwath.

Mr. Ford wants our children to be taught a dangerously outdated Health & Phys Ed curriculum. Written before same-sex marriage was legal. Written before social media. Lessons about consent & cyber-bullying protect our kids from harm. Let’s educate our students for 2018, not 1998.

“The premier made a backroom deal with Tania Granic-Allen, Charles McVeaty, and other far-right lobbyists to force outdated sex-ed curriculum and drag Ontario back to 1998,” she said.

McVeaty is a Canadian Evangelical Christian leader and a political Conservative activist who sparked controversy after making homophobic and other discriminatory comments on his show, which was pulled off the air by the Canadian Broadcast Standards Council (CBSC).

Horwath said Ford’s government is not helping students by repealing the current sex-ed curriculum. She said it ignores the responsibility the government has to teach students about consent and safety in school.

NDP MPP Peggy Sattler said the PC’s decision to pull back the sex-ed curriculum is a harmful move that puts children and youth at risk. She said the decision was made to appease a circle of socially conservative insiders at the expense of children’s safety.

“Will the premier admit that repealing the sex-ed curriculum was about advancing his own political career without any regard for the health, safety and well-being of young people in this province?” asked Sattler.

Ford referred the question to Thompson.

But she said her party will be having a “fulsome and wholesome” consultation with parents in order to create a new curriculum. In rebuttal, Sattler said repealing 2015 curriculum requires schools to teach an out-dated school curriculum from 1998.

“A curriculum written before same-sex marriage was legal, before texting, Google and social media,” she said. “It denies the existence of LGBTQ youth and families, and the reality of our modern, diverse society.

“It does nothing to provide young people with accurate and up to date information they need to protect themselves from cyber bullying, sexting, about healthy relationships, mostly about consent,” Sattler said.

Later, Sattler asked Thompson why they want to take away critical information and tools people need to keep themselves safe.

In response, Thomson claimed her colleagues will include updated information in the curriculum that students need for facing realities in 2018. She also said they will include new elements such as “luring and cat-fishing.”

“It was the most consulted curriculum in the history of Ontario,” said John Fraser, the Interim Leader for the Ontario Liberal Party during the member’s statements.

Here are my remarks re: the govt repealing of the updated sex ed curriculum. It’s simply irresponsible and bad for our kids. #onpoli https://t.co/PY6JiOtxJj

Fraser said the curriculum reflects the risks in our world today and he also argued that cancelling the new curriculum and replacing it with one from 1998 is simply “irresponsible.”

“Glen Canning, the father of Rehtaeh Parson, who tragically took her own life, said ‘what happened to my daughter was preventable, it was preventable with a good sexual program,’” he said.

Parson was 17 when she killed herself. Her parents said she was sexually assaulted at a party by four teenagers in 2011. Her parents also said she became suicidal when a picture from that night surfaced and was circulated around their hometown.

“There are countless stories of kids who have suffered that we haven’t heard and they are suffering now,” Fraser pleaded. “So I’m asking the government to reverse its decision and reinstate the curriculum in time for this school year.”

Ford seems to be declaring a war on the modern world, said Mike Schreiner, Leader of the Ontario Green Party, in a news release.

“Literally thousands of Ontarians were consulted. It would appear that the Ford faithful were just unhappy with the results,” Schreiner said in the news release. “Every child deserves to be protected in a world where sexting and cyberbullying are a reality.

“Any parent can choose to have their child excused from the teachings of the up to date curriculum if they desire,” he said. “But the government should not deny parents and students the choice of learning the new curriculum.”