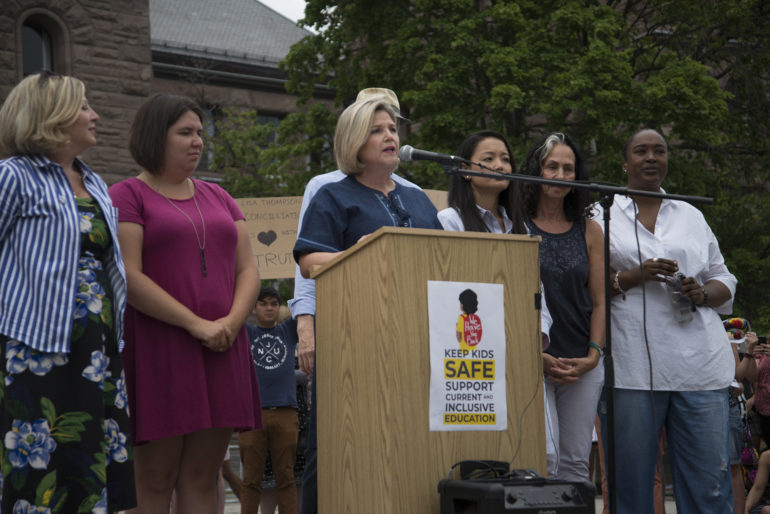 Question Periods at Queen’s Park rages on as Ontario Premier Doug Ford is set to reduce Toronto city council to 25 councillors from 47 with new ward boundaries.

The Conservative government tabled the Better Local Government Act on Monday and the response was cacophonous.

Heated House Rhetoric: NDP leader @AndreaHorwath accused @fordnation of rigging municipal elections, being a bully and carrying out an assault on democracy.

Today, the bill that will cut down the side of Toronto City Council is expected to get 2nd reading. #onpoli

Today Opposition Leader Andrea Horwath said Premier Doug Ford had an entire election campaign period to look people in the eye and tell them what he was going to do. She said instead of being “straight up with the people” he deliberately kept his plot from millions of voters.

Ford replied back by saying the opposition leader only cares about “protecting a bunch of politician’s jobs.” He said his party is trying to save tax payer’s money.

Yesterday, Horwath said the premier’s secret plot to interfere in municipal elections is the act of a bully and not of a leader. She said he never campaigned on it and never consulted anyone. Toronto’s response could include a referendum on the issue and possibly a couple of court challenges.

Horwath said Ford’s most recent sporadic move is the most “anti-democratic thing the province has seen in years.”

In response, the premier claimed he talked to “tens of thousands of people in Ontario and thousands in Toronto.” He said he campaigned on reducing the size and cost of government.

Ford said the people he’s talked to want fewer politicians. He asserted that “every single person” he spoke to told him city hall is “dysfunctional.”

“The premier’s secret plot cooked up in the backroom and hidden from the people of Ontario for the entire election campaign doesn’t just fit the very definition of a hidden agenda, it’s also petty, mean spirited, and it’s a vendetta of a man who doesn’t want to lead,” Horwath said.

“Instead, he wants to bully his way through, he wants to get his own way and exact revenge on his old political opponent,” she said.

Horwath is referring to former Ontario PC Leader Patrick Brown, who would no longer be able to run for the regional chair of Peel due to these cuts. However, since then Brown announced he is running to be mayor of Brampton.

She asked why Ford is abusing his power and showing such contempt for the people of Ontario.

“The premier’s plot to undermine Toronto City Council and stop [regional chair] elections in Peel, York, Niagara, and Muskoka is an assault to our democracy,” she said. “It robs people of their voice, it robs the people of Toronto of their right to decide how many councillors they elect.”

Horwath said the premier is driven by his own desire for power.

Ford responded, saying since Toronto has 25 MPs and 25 MPPs, it should also have 25 city councillors.

Although Ford didn’t explain how their jobs would be made easier or exactly how he would be helping the environment, since reducing city councillors will not necessarily reduce the work load at city hall.

“All he cares about is inflicting his will and his own whims on the people of this city,” Horwath countered. “Why is this premier trying to rig local elections, speaker, just to put more power in his own hands?”

She said “interfering in the middle of local elections” takes power away from the voters and is not an act of leadership, but instead an abuse of power.

“Taking revenge on political opponents does not show strength, it’s a deeply chilling sign of weakness and insecurity,” she said.

“Hiding one’s secret plans during an entire election does not show respect for voters,” Horwath said. She then asked why the premier is acting “like a dictator.”

Horwath reminded the Ontario legislature of Ford’s unsuccessful attempt at becoming the mayor of Toronto during the last municipal election in 2014.

Later during question period, NDP MPP Peter Tabuns asked to the Minister of Municipal Affairs and Housing Steve Clark when “did the premier tell the minister his plan to interfere in Toronto’s election during the middle of their campaign, when?”

Clark then replied by saying the Conservatives were elected on a mandate of trust and accountability.

He also said he wanted to remind Tabuns his party received a mandate to reduce the costs and size of government while they were campaigning.

“The premier didn’t campaign on interfering in Toronto’s election, it didn’t come up until Thursday night, three months after the municipal election began,” Tabuns said. “It wasn’t in his platform, he didn’t mention it in a single debate.”

Clark said his party believes the proposed legislation will streamline city council and result in better decisions. He said this proposal would save taxpayers $25 million as well.

“Your overnight decision to meddle in the Toronto municipal election is concerning,” said Liberal MPP Mitzie Hunter. “Again and again you [Ford] drive chaos through this system.

“Given the elections have already begun on May 1, hundreds of candidates already registered, signs have been purchased, people have signed up,” she said. “This creates chaos at a time when we need stability and strong leadership.”

Hunter asked whether the premier would commit to consultations regarding his move to slash city council.

Clark said the Conservatives are proposing the nomination period to be extended from July 27 to Sept. 14.

He also said they would continue to work with the clerk’s office and the city of Toronto through the “transition period.”