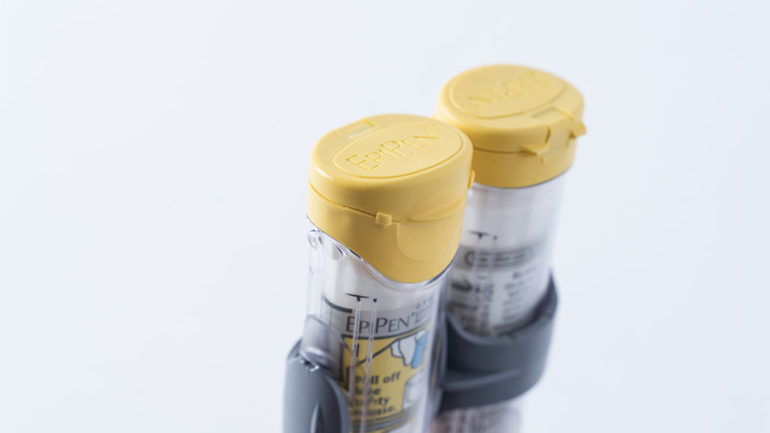 EpiPen auto-injectors are currently in limited supply and Pfizer Canada isn’t expecting a new shipment until the end of August. (FLICKR/stockcatalog)

Allison Venditti knows firsthand the lifesaving capabilities of EpiPens. Two years ago, her six-year-old son had an a life-threatening allergic reaction and needed three emergency EpiPen treatments to combat the anaphylactic shock his body went into.

“Each pen only lasts 15 minutes,” the Downtown Toronto Allergy Support Group founder said. “In most places, it takes longer than that to get to the hospital. So if you need another one, you better have another one on hand.”

Venditti was lucky she had the right amount of EpiPens ready to treat her son. Unfortunately for Canadians like him who require such treatment, the country is currently experiencing a shortage of auto-injectors.

Pharmacies in Canada currently only have a limited inventory of EpiPen adult doses of 0.3 mg and the 0.15 mg dose for children between weighing between 15 kg (33 pounds) and 30 kg (66 pounds).

Auto-injector supplier Pfizer Canada released a statement on Monday that said they anticipate the next shipment of the doses will hit the Canadian market by the end of August. However, availability will still be limited.

“Limited inventory will be available and will continue to be managed through measured allocation,” the statement said. “Pfizer understands the importance of this medically-necessary medicine to Canadian patients and continues to take action to expedite delivery of product to the market.”

Venditti said the shortage is “horrifying” and fears for the safety of her family. Her two sons, aged four and six, require EpiPens, as well as her husband.

“They’re denying life-saving medication to children,” she said. “I’m shocked there’s not more outrage, because if they said they’ve run out of cancer drugs, people would be up in arms.”

“Stock that was scheduled to be shipped in early August is currently being inspected, which has caused the delay,” Elkas said.

While the auto-injectors are in short supply in the country, she confirmed Pfizer Canada has no shortage of the drug epinephrine.

Health Canada released a statement on Monday detailing the auto-injectors shortage and explained that while this is classified as a “shortage,” that doesn’t necessarily mean there are no supplies available at all.

1/3 – Pfizer Canada is advising that #EpiPen (0.3 mg) may not be available in pharmacies during August. EpiPen Jr (0.15 mg) is available, but in limited supply that is being carefully managed. https://t.co/C4fBXeG0Lr #anaphylaxis #drugshortage #allergyaware

2/3 – We recognize the seriousness of the issue and are working with all stakeholders to help reduce impacts of the EpiPen shortage. If your #EpiPen is expired, keep it and use it if needed, and call 911. More: https://t.co/u6oOXFh18K #anaphylaxis #drugshortage #allergyaware

“At this time, [Pfizer Canada] has indicated that limited inventory of [0.3mg and 0.15 dosages] remain available and are being carefully managed nationally,” the statement said. “We are working closely with the company, the provinces and territories as well as stakeholders to coordinate information-sharing and to help minimize the impact of this shortage on Canadians.”

Health Canada recommended patients have more than one auto-injector with different expiry dates in order to avoid being caught with only an expired injector. During the shortage however they encourage patients to use expired auto-injectors if they’re experiencing an anaphylactic reaction and only have an expired pen available, and then to immediately contact 911.

“Regardless of whether the product is expired, you should get to the nearest hospital as soon as possible following the administration of the product,” the statement said.

Venditti believes the idea of using expired EpiPens is ridiculous and dangerous.

“They have an expiration date because the medication inside becomes unstable,” she said. “Is it still effective? I don’t know. No one knows. It’s a guessing game. Most people won’t even feed their children expired yogurt. It’s just not ok.”

Health Canada medical advisor Dr. Supriya Sharmer said patients should only use expired EpiPens as an absolute last resort if they’re having an allergic reaction and have no other pens available.

“That would be an unusual situation, where they don’t have access to anything else and have to use an expired product,” she said. “But just because something is expired doesn’t mean it doesn’t work at all. What we’re saying is to use the expired pen if there are no other options and then call 911 immediately.’

“Expiry dates work because of the information that we have,” Sharmer said. “Basically, an expiry date tells you the product will work exactly the same way from day one when you get it, until that expiry date. We don’t really have information to make sure it works exactly that same way past that date.”

Health Canada is advising patients to use expired EpiPens as a last resort if an anaphylactic reaction occurs and no other pens are available. (FLICKR/idreamicanfly)

She warned that patients should always look at their EpiPens before they use them past the expiry date, and if the liquid inside is cloudy or discolored, they shouldn’t use it.

In Canada, there are no alternatives to the auto-injectors and Pfizer is the only supplier. Venditti believes the latter is something that must be changed in order to avoid future shortages.

“There’s no generic drug, like Auvi-Q, which the U.S. has,” she said. “The U.S. has other options, but in Canada we don’t have any options. We need to get other generics in Canada so we don’t have to deal with this.”

Sharmer said the shortage has been going on for months and is nothing new, but as supplies run tighter, patients need to be aware of what’s happening, particularly as the summer continues.

“During the month of August, there might be a period of time where there is actually no product available,” she said. “So we definitely want to bring it to people’s attention now because it’s more serious, and also because it’s the summertime. People may be traveling, they may be exposed to things that they may be allergic to that they wouldn’t normally be exposed to.

“Over the past few years, other products that are used for treating allergic reactions have run into manufacturing problems, so it’s not something completely new,” Sharmer said. “But the information we have now about the shortage is new, and important as we move into August.”

She emphasized patients who require EpiPens recognize that the product expires on the last day of the month that is indicated on the packaging, not the first, so those pens marked as expiring in August will expire on Aug. 31.