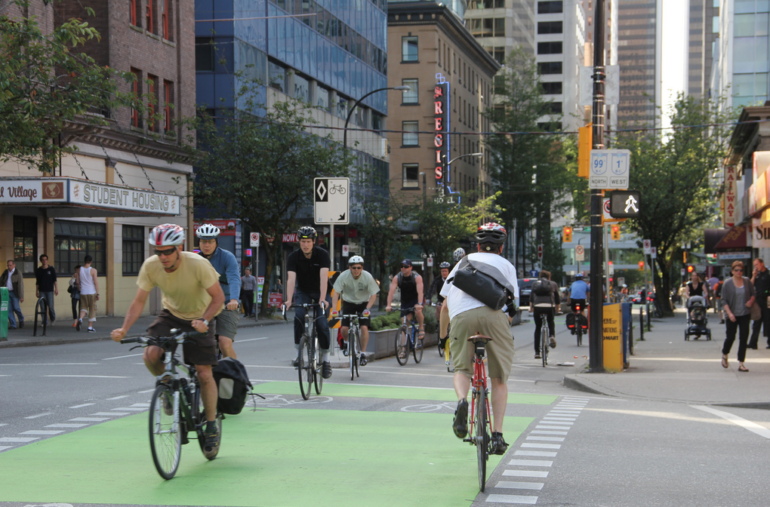 A new poll shows support from every region of the city and three-quarters of drivers for building more bike lanes in Toronto. (FLICKR)

More than 80 per cent of Toronto residents support building more bike lanes, according to a new CBC poll conducted by Ekos Research Associates.

In downtown, the area where the support is highest, nearly nine in 10 people want the lanes, the survey taken earlier this month showed.

Support was also visibly high in the suburbs, including Scarborough, Etobicoke and North York, with more than 70 per cent of respondents supporting bike lanes, the survey found.

Bike lanes and road safety have been big issues amid a surge in cyclists and pedestrian deaths in the city.

According to Toronto police, 20 pedestrians and three cyclists have been killed in collisions this year.

“Whether you are in a car, on a bike, or on two feet, people are realizing that out streets weren’t designed safely or intuitively,” Kyle Ashley, a former Toronto parking enforcement officer who a year ago became famous for chasing motorists out of the city’s bike lanes, told Humber News.

Ligia Fernandes, a events management student at George Brown, was hit by a car turning right on Yonge Street when she was going to college.

She told Humber News that on her daily rides to school she has seen a couple of collisions involving vehicles and cyclists, which generally happen when drivers want to turn right.

“Some drivers stop on the right side to pick up or drop off people and don’t indicate,” Fernandes said. “Some of them even park their car on the bike lane.”

Ashley said the relationship between all road users in Toronto at the moment is strained and often vitriol.

“I think people want to respect each other on the road, but given that the design of our streets is hostile and unintuitive, this only further breeds that culture of conflict,” he said.

Ashley stresses this acrimonious relationship on the road is nothing more than a political attempt to deflect from inaction, a “war on the car rhetoric.”

“When politicians frame the discussion this way, it makes it sound like we are all competing for space on the road, and that the car is the king, when in reality, we all just want to get home safely at the end of the day and operate our vehicles in a safe and predictable manner,” he said.

The random survey of 800 Toronto residents also found more than 75 per cent of those who primarily drive around the city support protected bike lanes.

“I am glad that many motorists are now seeing that we can share the road peacefully, and that this is not a war on their car, but a war against violence,” Ashley said.

However, he believes Toronto is not doing as much as people need when compared to other growing cities.

Ashley said some cities in Western provinces have experienced a ridership increase of 90 per cent after building connected networks.

“Toronto needs to stop acting like the stubborn adolescent when it comes to road safety, intent on making our own choices and decisions, and look to other cities, like Vancouver and Montreal, and copy what has worked,” he said. “If you build it, they will ride.”