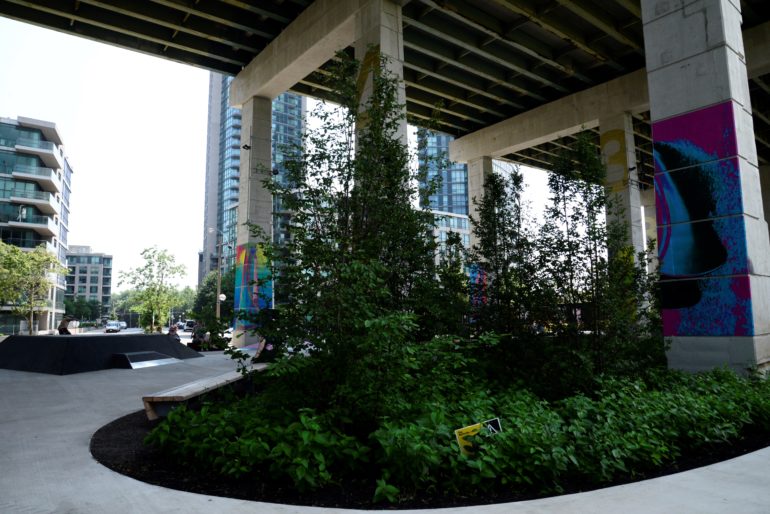 Skateboarders performing some tricks Sunday during the weekend opening of CITE, an event that commemorates Justin Bokma, a skateboarder murdered two years ago near Toronto’s Kensington Market. (Sebastian Mahecha)

Justin Bokma, a Toronto professional skateboarder, was shot to death two years ago after a street fight near the Kensington Market area. After news of his death broke, skateboarders across Canada sent their condolence messages to Bokma and his family.

But that wasn’t enough.

Two years after his death, Bokma, 42, is remembered at the opening of CITE, a summer-long celebration of skateboarding, arts and culture that kicked off during the Canada Day long weekend under the Gardiner Expressway near Bathurst Street.

Bokma’s friends, family and members of the skateboard community came together after his death to create the non-profit organization Build for Bokma. Its principal objective is to create multifunctional skate boarding public structures for everyone.

Justin Bokma died at the age of 42 in a shooting that killed another man in a Kensington Market are club on Canada Day, 2016. (Facebook)

The Bokma Foundation then partnered with the Bentway Conservancy in Toronto to create CITE.

CITE kicked off over the weekend and hosted DJs, graffiti artists, food and games for kids as well as skateboard exhibitions. It’s a skating rink during the winter.

Julian Sleath, CEO of the Bentway Conservancy, said CITE aims to make people re-imagine what the Gardiner Expressway could and should be.

The skateboard park is a new vision of what the Gardiner Expressway can be, said Julian Sleath, CEO of the Bentway Conservancy. (Sebastian Mahecha)

“We are trying to turn the Gardiner into this modern day public park for everybody to enjoy,” Sleath said.

“Skateboarders have often led the way to reimagine unused, industrial spaces for their soon-to-be Olympic sport,” he said. “The Gardiner was a beloved skateboard destination prior the construction of The Bentway and we are very excited to be working with Build for Bokma to welcome the community back to the site.”

“I helped to build this rink with the Bokma foundation. They are trying to commemorate the memory of Justin,” Riegert said.

“Justin was a huge influence in the Toronto skateboarding community, he was one the first Canadian pros,” he said. “He was always a great dude, I never personally got to skate with him, but a lot of the older guys that I know learned from him.

“It passed through generations. He was a mentor of the Toronto skateboarding. He was always about helping the community, so we wanted to do the same.”

CITE will be open until Aug 12 and will launch a series of workshops including videography, designing skateboards, building skates and screen printing.

“This a wonderful initiative that puts the community together, and skateboarders love it,” said Thristian Kokk, a volunteer with The Bentway.

“We live in downtown, and this is concrete and we like to see concrete turn into a festivity, so it’s nice to see a dialect place being used for socializing in a positive way,” he said.

Sleath said multiple stakeholders are sponsoring this event, but that this is essentially a public-private partnership.

Aaron Gerrett, skateboarder and member of Build for Bokma, at the Bentway under the Gardiner Expressway during the weekend opening. (Sebastian Mahecha)

Private companies like Vans, Vice and SBC Skateboard Magazine were among the public sponsor that gave life to this initiative.

Vans General Manager Jared Bevens said the company is excited to partner with The Bentway and Build for Bokma to present CITE and help bring their vision of skateboarding and creative expression to life in the city of Toronto.

“We all need a backyard,” Sleath said. “There are more than 77,000 people living within 10-minute walking to the Bentway, that’s bigger than many cities across Canada, and places where we play and socialize are becoming more shrunken and desperate.”

Bokma will be remembered as a legend among the Toronto skateboard community for his abilities, and his legacy will be immortalized by his friends with CITE.

He and LeFranc Matthews, 41, were gunned down in a nightclub on College Street near Augusta Avenue on Canada Day two years ago. Two others were wounded in the shooting. The murders remain unsolved and a $50,000 reward is being offered for information that leads to the conviction of the killer or killers, Toronto Police say.

“It’s an amazing opportunity for everyone in Toronto to get closer, not just the skateboarding community, but people from GTA,” Riegert said.