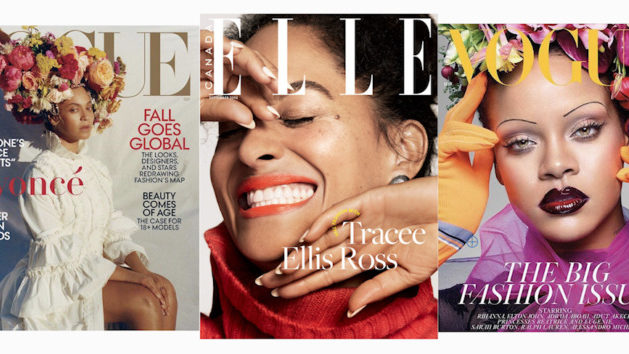 Beyoncé, Tracee Ellis Ross and Rihanna, are on the front covers of magazines September issues.

In the world of fashion, being on a cover of the key September issue of any prestigious Eurocentric magazine is a big deal.

It’s the beginning of a new season and the publications are showcasing the hottest fall trends making their debut.

Some of the most influential black women in the entertainment industry will be gracing the covers of several national and international magazines.

Beyoncé will be on the cover of American Vogue while Rihanna will grace the British Vogue. Tracee Ellis Ross will be on the September cover of ELLE Canada, and Oscar winner Lupita Nyong’o on Porter Magazine. Comedian Tiffany Haddish and actress Zendaya will be gracing the covers of Glamour and Marie Claire respectively.

This all just oozes plenty of #BlackGirlMagic, a viral hashtag celebrating beauty, power, and resilience of black women.

Social media went berserk when the announcements of these six women were to be on the covers for the September issues were released.

The singer has full control, artistic freedom and power over the cover and she wanted 23-year-old Tyler Mitchell to shoot the cover. That’s a big deal. Mitchell will be the first-ever black photographer to get the front page assignment in Vogue’s 126-year history.

With a flower crown, bold lips and thin pencil-drawn eyebrows, inspired by Marlene Dietrich, Rihanna posed on the front cover of British Vogue. Most of the attention and praise the Bajan singer is receiving is because she is the first black women to ever appear on the cover of the magazine’s September issue. 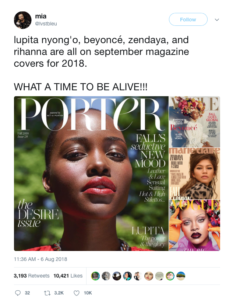 Black women are being celebrated on a number of major fashion magazine covers this September.

British Vogue will be 102 years old in November and hasn’t featured an individual black model since Naomi Campbell 12 years ago.

These prestigious magazines frequently have cover models that embody European beauty norms. The use of black women on their upcoming covers is representing a shift in the industry.

“When I first started, 21 years ago, I was told that it was hard for me to get onto cove

rs of magazines because black peoples did not sell,” Beyoncé said in her Vogue issue. “Clearly, that has been proven to a myth.”

The 2014 remake of Annie casting a young black actress in the titular role, #OscarsSoWhite , even the box office hit Black Panther proved the importance of representation in the entertainment industry.

This demonstrates that there is room for inclusion despite the growing divide between peoples across the world.

Toronto social columnist Shinan Govani said he feels although change has come to the magazine scene it isn’t progressing as rapidly as one would expect, considering the number of years some of these publications have existed.

“This moment in the fashion magazine-sphere seems is one that has taken a lot of time coming,” he said. “Beverley Johnson made her iconic debut on the cover of Vogue in 1974 — and, in many ways with her being the very first black woman to ever be on the cover of Vogue, progress has come at a truly snail pace.”

Govani said when he looks at the extensive list of black women that will be appearing on the covers of September issues, he can’t stress enough the importance of inclusion.

“Representation is everything,” he said. “Rarely can a dream be manifested, or endeavoured, unless the idea of being ‘seen’ is hard-wired into certain segments of the population, especially at a young age.”

Among the entertainers on the September issues’ front covers is the rare image of a black comedian. This is a huge moment in Haddish’s career.

“I am particularly happy to see Tiffany Haddish getting her due, her whirl in the fame cycle has been particularly fast,” Govani said. “I do not think we have seen a black comedienne cross over this way since Whoopi Goldberg in the ’80s and ’90s.”

Haddish agreed diverse representation is lacking in film in her Glamour interview.

“I just think that a person is ignorant when they say, ‘oh you’re being a stereotypical black person.’ Well, what’s that? Explain that to me, because that an actual person and everyone deserves to see themselves onscreen,” she said.

“I feel like all facets deserve to be seen-from the janitors to the baby mamas to the side chicks,” she said.

With a vibrant orange lip, yet minimal makeup looking so natural, so carefree and full of life, is Tracee Ellis Ross displayed on the front cover of Elle Canada’s September issue.

In an interview with Humber News, Vanessa Craft, the Editor-in-Chief of Elle Canada ecstatically shares how she feels about black women being the on the front covers of numerous magazines for their September issues.

“It’s exciting,” Craft said. “The September issue is always such a significant one in the fashion business. There’s a legitimate shift happening in the zeitgeist,” she said. 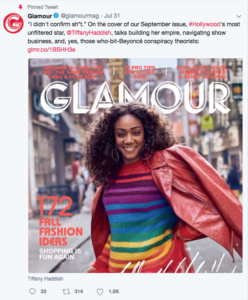 The “Blackish” star was selected for the positive energy she radiates.

“Representation matters, you see something for yourself that you perhaps hadn’t imagined was possible that it boosts self-esteem,” Craft said. “Young girls need to see reflections of themselves in the media, advertising, society. We all deserve to have heroes we can identify with.”

Craft emphasizes much is borrowed from black culture but not acknowledged, but representation helps reset that balance. Inclusion is also good business.

“I think what is different now, and helping speed up the carriage-horse effect is that in terms of media visibility, the powers-that-be (fashion brands, or the people behind magazines) realize the economic muscle behind these stars and their fans,” Govani said.

“It is only smart for Vogue, Elle, et cetera, to try and reach to different sectors of the population, especially at a time when print media sales are limp,” he said.

All this helps challenge notions that women of colour aren’t capable of selling magazines.

“It can showcase and highlight other stories that haven’t been told before but that can still connect with many women,” Craft said.

“There is still a lot of work to do and a long way to go this is a wonderful benchmark but there is a significant lack of representation with, say the Asian or Indigenous or LGBTQ communities in mainstream magazines,” she said.

Though black culture is having a celebration from this type of industry representation, other ethnic groups are yet to make a debut on September covers.

“As much as this is a positive and much-needed move in the right direction, we should take a moment to look at diversity in a fuller context: African-Americans make up something like a little above 12 per cent of the population, and Hispanics likewise … but has there ever been an Asian on the cover of Vogue?” Govani asked.

“We have seen the likes of Mindy Kaling and Priyanka Chopra start to appear on other overs recently, but all things considered, their African-American sisters are if anything, over-performing, if you look at things more broadly,” he said.

“You can see that in films, where films like Moonlight and 12 Years A Slave, have won Oscars recently. The fight should be bigger. And not be reductive in terms of what qualifies as diversity,” Govani said.