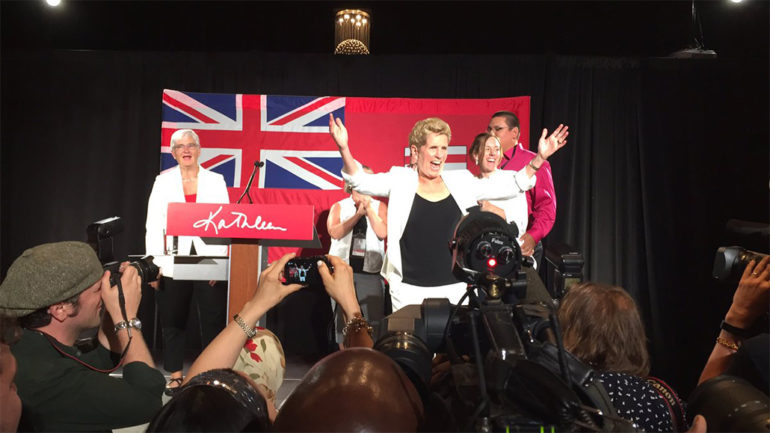 Kathleen Wynne, after stepping down as Liberal party leader, dances to Elton John’s “I’m Still Standing” in front of her supporters. (Norma Zminkowska)

Ontario Premier Kathleen Wynne has announced her resignation as Liberal Party leader but has retained her seat in the Ontario legislature.

A tearful Wynne announced her decision to her supporters as she conceded defeat for her party.

“I am resigning as the leader of the Ontario Liberal party,” she said. “There is another generation, and I am passing the torch to that generation.”

“I hope that you can feel very proud of what we have done together in the past and are absolutely determined to take on the task that lies ahead,” she said.

The NDP’s Amara Possian finished third behind Wynne and Kieran, receiving 8,620 votes and 18.83 per cent of the vote.

Thus far the Liberals are tracked to fall one seat short of retaining party status, projected to win only seven seats.

Don Valley West is located in the northeastern Toronto with a population just over 123,000.

Wynne, Ontario’s premier since 2013, has represented the Don Valley West riding for the Liberals since 2003. Wynne’s profile on the Ontario Newsroom website describes her focus on “creating new opportunities for people and businesses, and ensuring a fairer, more secure future for everyone in the province” and states she is “unwavering in her support for a fair and open society.”

Wynne was elected leader and was sworn in as premier on Feb. 11, 2013. In the last general election in 2014, she led her party to a majority government. As listed on her website, Wynne’s accomplishments during her time as premier range from balancing the provincial budget, to raising the minimum wage, to making a deal to “improve retirement security by enhancing the Canada Pension Plan.”

Kieran joined the PC party in 1981 as a speechwriter but this is his first attempt as a political candidate. He also has an extensive history in the energy sector, having held positions including director at Hydro One. He led the development of initiatives for an affiliate of a French electric utility company called Électricité de France for seven years between 2008 and 2015. There, he worked on projects involving solar and wind energy.

Kieran also calls himself an “expert renewable energy whistle blower.” After he left his position in 2015, he voiced complaints about the “mismanagement of large renewable procurement in Ontario.”

Possian ran in third place in the riding, behind the incumbent and PCs. She grew up in the Don Valley West riding and is a business owner in charge of helping non-profits design their action strategies and infrastructure.

Possian vowed to strengthen the healthcare system, which was one of NDP leader Andrea Horwath’s major campaign promises.

Green Party’s Morgan Bailey ran for his first time this election, with promises to make housing affordable and promote fiscal responsibility. Three years ago he became a member of All In, a non-profit advocacy group that focuses on creating inclusive communities.