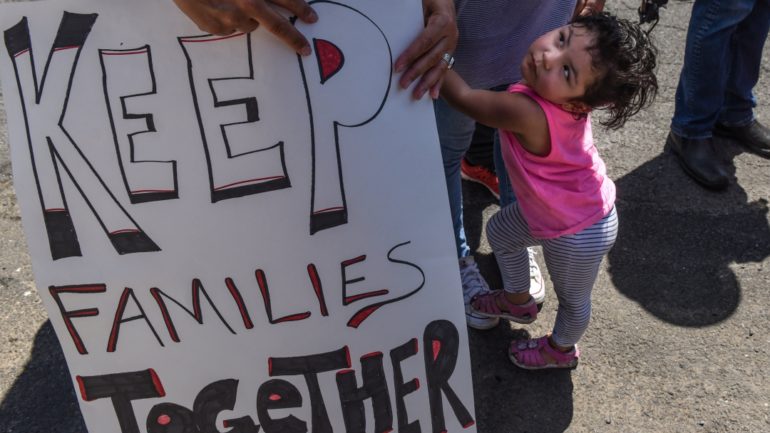 The policy, which was released in May, has forcibly split more than 2,000 children from their parents.

“This is a clear violation of human rights and puts children, including those with disabilities, in a vulnerable situation,” Mexican Foreign Minister Luis Videgaray said Tuesday in a news conference in Mexico City.

The photos show children sprawled on thin mattresses and under emergency thermal blankets.

The facilities’ staff said children under five are allowed to stay with their parents and said all children kept in the facilities are being sufficiently provided with food, water, laundered clothes, medical care and access to showers.

U.S. political figures and the U.N. High Commissioner for Human Rights have spoken out against the newly-enacted “zero-tolerance” immigration policy.

In a letter to Attorney General Jeff Sessions and Homeland Security Secretary Kirstjen Nielsen, 21 attorneys-general have demanded the Trump administration end the policy, citing the practice is contrary to “American values.”

In a series of tweets, former First Lady and Secretary of State Hillary Clinton criticized Trump’s policy, claiming it is a humanitarian crisis.

What’s happening to families at the border right now is a humanitarian crisis. Every parent who has ever held a child in their arms, every human being with a sense of compassion and decency, should be outraged.

Former First Lady Laura Bush expressed her disappointment to the policy at the border in a June 17 tweet.

I live in a border state. I appreciate the need to enforce and protect our international boundaries, but this zero-tolerance policy is cruel. It is immoral. And it breaks my heart.https://t.co/he1uw1E96A

The UN High Commissioner for Human Rights Zeid Ra’ad al-Hussein demanded Trump to end his policy, saying the children are suffering for what their parents did.

“The thought that any state would seek to deter parents by inflicting such abuse on children is unconscionable,” he said.

“I call on the United States to immediately end the practice of forcible separation of these children,” al-Hussein said a speech to the U.N. Human Rights Council on June 18.