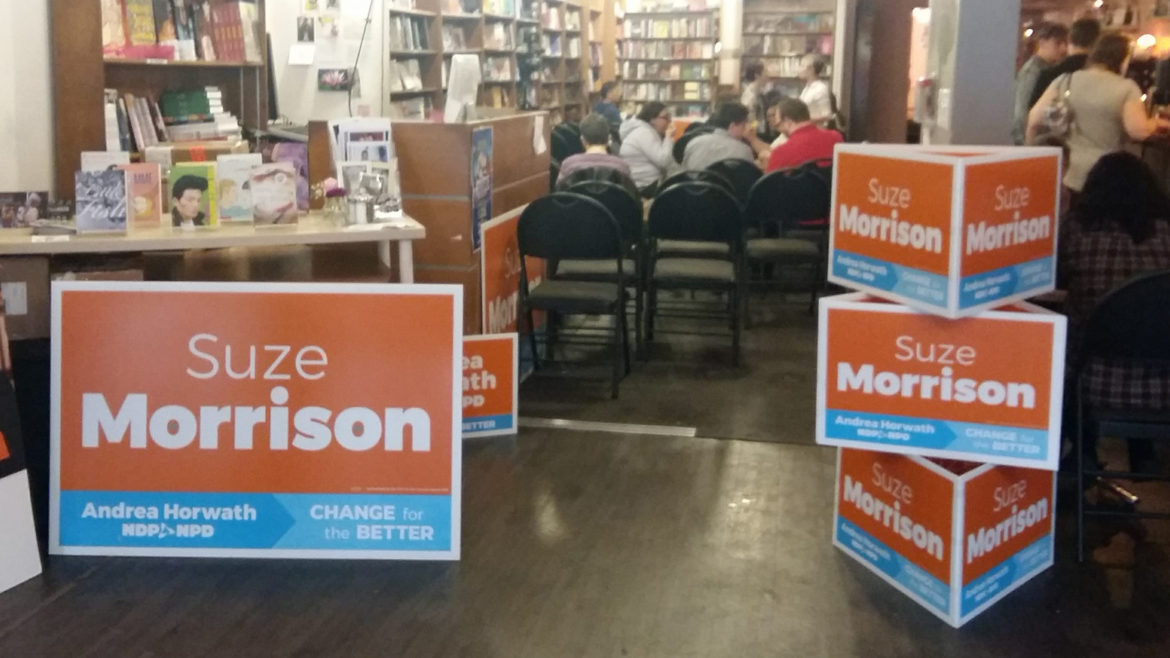 Suze Morrison has scored a victory for the New Democrats in Toronto Centre in the Ontario election.

Morrison of the NDP focused her campaign on amplifying people’s voices and creating more equitable communities. “I want to make sure that Toronto is always a place that supports people when they need it most,” she said on her website, adding “where no one is left behind because of poverty or affordability.”

F it – I know it’s bad people – but I gotta #celebrate the #Amazing @DelSuze Suze Morrison #Crushing #TorCen and committing to #FightFord pic.twitter.com/Ri6T2HdzWU

Morrison worked in the Indigenous nonprofit sector to improve the lives of urban Indigenous people across Ontario and co-founded Women in Politics in 2013, a grassroots initiative to increase the representation of women in government.

Morris ran to replace Glen Murray, who first won the riding in 2010. He ran on a platform of community engagement. As a member of the LGBTQ+ community, he aimed to empower communities of all ages.

The Toronto resident campaigned on being a voice for diversity and inclusion in issues like fair employment, community safety and education. His father was a long‐time municipal councillor in the Township of Central Wellington, a community north of Guelph.

Cartwright stated on her website she is an accomplished human rights lawyer, businesswoman and advocate for Toronto Centre. She serves on several boards and is a fighter for women’s and children’s rights in law and health. She runs two private equity firms.

Sommerfeld is a veteran of election campaigns. He ran as a Green federally in the Ottawa area and in Quebec. “Our vision looks to build on our healthcare system, invest in preventive care, physical and mental care,” he said on his website.

The other parties on the ballot included The People, Libertarians, Canadian Economic, New People’s Choice, Special Needs and the Stop the New Sex-Ed Agenda.

It’s with great pleasure for us to support @DelSuze in #TorCen. She’s smart, capable and compassionate in every possible way. Suze is a proven leader and and will work hard as our MPP to make us proud. #ONpoli #Indigenous #WomenInPolitics #RepresentationMatters pic.twitter.com/4jSYLpLzdn

The Liberal Party also won the 2011 elections with a plurality of 13,665 votes. However, the NDP got 25 per cent or 11,571 of the votes. The Progressive Conservatives party received 7,186 votes and a 15 per cent ballot to finish at third place. The Green Party received 1123 votes that made up 2.4 per cent of the turnout.