The Intersection of VR in Healthcare, Film and Video Games 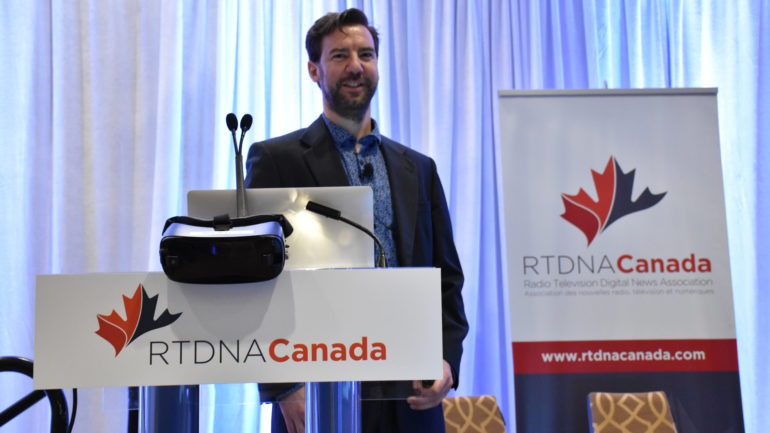 The Electronic Entertainment Expo 2018 (E3) in Los Angeles and the 2018 Virtual and Augmented Reality World Conference and Expo (VRTO) in Toronto are top events in the gaming and technology industry this week, but professors, researchers and industry workers have already been pushing the boundaries of virtual reality (VR).

VR changes the way people can play games or watch movies, but the platform hasn’t yet reached mass adoption in any industry. Kris Hodgson, who is the chair of the School of Media and Design at Lethbridge College, said he hopes that will change soon.

The way people view these stories may be a reason why there isn’t mass consumption.

“When you put on virtual reality goggles and you’re in the middle of a story, it is very unsettling — how real it feels,” Hodgson said.

“You’re in two places at once,” he said. “This duality of presence — You’re in this room right now, sitting here, talking to me, you put on those headsets — and you’re in this other place, and you’ve got on the headphones, so you’re starting to block off your senses. It’s very powerful.”

This effect of VR was showcased by Hodgson’s students, who looked at a mock disaster of a fentanyl overdose. Along with hired actors, Lethbridge College students created a VR 360 experience.

The biggest challenge his students faced was accepting the use of VR in the first place.

“The movie Ready Player One was to trigger more adoption of VR experiences, and journalism is historically slow to evolve, so it would be really interesting to see when or at what point we’ll have this mass adoption of delivery,” Hodgson said.

He said another challenge was to come up with compelling content, because not everything can be made into a VR experience. However, Hodgson challenges content creators to push the boundaries – as content can be anything from an overdose simulation to giving patients in palliative care a view of the outside world.

Anouk Lamontagne, who is an associate professor in the School of Physical and Occupational Therapy at McGill University, also agrees with the use of VR in healthcare.

She said VR is an important part in helping patients in rehabilitation processes. One of her projects uses VR goggles and an omnidirectional treadmill to enhance community movement in patients that have mobility problems caused by a stroke.

“Often, we will use virtual environments as a mean to recreate ecological contexts in which patients can practice and problem solve, but under safe and controlled conditions,” said Lamontagne, who is also a champion of the school’s Virtual Reality and Mobility Laboratory.

With her research, Lamontagne can tailor the training to meet each patient’s needs, provide intensive practice and can even make it into a game — with levels and rewards — to enhance motivation.

Like Hodgson, she believes that there’s still a lot of work needed for the adoption of VR, especially in making the platform easy to use.

“That future is catalyzed by the technologies developed by the video games industry,” she said.” “It helps develop new technologies at lower costs, but this technology needs to be adapted and made safe for clients with disability,” she said.

Marientina Gotsis, a research associate professor of Interactive Media and Games at the University of Southern California, is also promoting VR as a platform for healthcare. Her focus is on rehabilitation through video games.

“Jewel Mine, SnowWorld and Virtual Iraq are some examples of VR games and VR experiences that have been clinical with success,” she said. “Our lab is also doing some design and pre-clinical studies with new games for people with spinal cord injury and also people with Parkinson’s.”

Gotsis also offered a view about the cost of VR.

“In general, VR hardware is now incredibly affordable,” she said. “When I was a student, within 8 years, the cost of ownership dropped from half a million dollars to $50,000 for projection based VR and headsets,” Gotsis said.

“Now, 15 years later, excellent quality room-scale VR using the HTC Vive can be had for less than $2,000 and solutions for ‘sitting/standing VR’ for as little as $300,” she said.

“You can’t do walking rehabilitation with Google Cardboard, but you could probably use it for a quick pain distraction for an acute procedure,” she said.

Matt Hamilton, who is the owner of Firesight Films, had a similar experience to Gotsis when it comes to the way technology has evolved over the years.

“The OZO was a $60,000 at the time, and they were hard to come by in Toronto,” said Hamilton, who also worked on a music video for the band Polarity. “We knew of one company that had them, and not only were they expensive to rent and hard to reserve, the quality was surprisingly not sharp.”

Hamilton said VR is much more immersive than traditional cinema because of its potential for audience engagement.

“Cinema is traditionally thought of as a passive viewing experience for the audience,” he said. “You are guided through the narrative by virtue of the fact that film photography and editing is meant to isolate points of focus in a frame.”

VR, on the other hand, surrounds the viewer in a new world and they have the choice to look away, since there is less emphasis on a single point of focus.

“VR, in a sense, almost can’t avoid bridging MMORPGs (massively multi-player online roleplaying games) and cinema, because there’s an entire environment other than the person sitting across from you — you almost can’t help but look around,” Hamilton said. “So in that sense, the element of traditional cinematic storytelling falls away.”

Hamilton said VR photographing technology blurring the line between cinema and video gaming will be inevitable.

“The thought of being in a ‘choose-your-own-adventure’ movie that is a world composed of real actors seems like a real possibility, and not necessarily a far off one,” he said. “If the growing popularity of video gaming isn’t an indication that there is money to be made in immersive cinema, then it seems almost a guarantee that once someone figures out how to produce a movie like that, it will be a thing.”

VR versus the single frame

Thomas Emptage, owner and operator at Immortal Culture Media, also sees the potential in emerging advances in video game VR with cinema. Like Hamilton, he sees a challenge in getting viewers to focus in a frame.

“As soon as the viewer moves their head forward, backward, side to side or up and down, they experience discomfort due to the visual environment not responding to their head movement,” he said.

“The only method used to solve this so far is head-tracking — which means the film has to be rendered in real time in a 3D environment by a CPU and cannot be a recording. “It has to be a scripted video-game, basically.”

Sina Dolati, the co-founder, director and producer at Toronto’s Labyrinth Media, also finds head-tracking a key element in effective VR storytelling. Dolati said the perception of scale, proximity, presence and the inescapability of the world are crucial to capture.

Dolati also sees a bright future for VR, especially with the conference coming up.

“VR has massive potential in many industries such as therapy, tourism, training, and education,” he said.