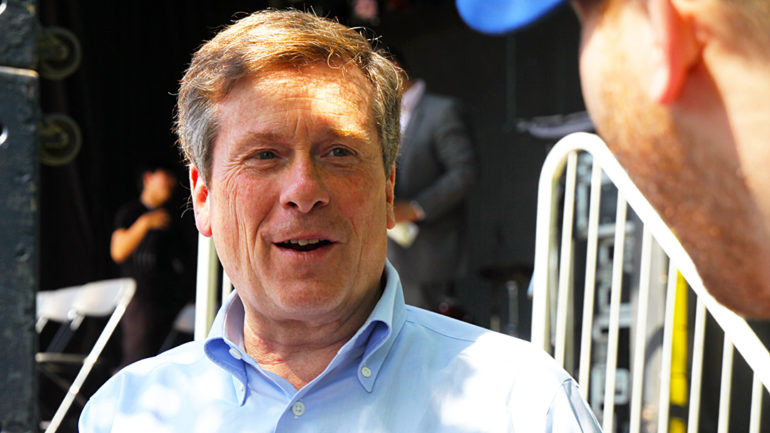 Toronto refugee shelters are overloaded and the city will soon not be able to accept new asylum seekers without financial help, Mayor John Tory wrote in a letter to the federal government.

The letter obtained by CP24 on Tuesday reportedly informed federal officials of the current immigration status in Toronto and asks them for help.

Tory said the city welcomes newcomers to settle in Toronto but infrastructure conditions in the city hinder authorities’ ability to do so.

“Our city has a long history of welcoming newcomers and continues to express our support for your government’s policies related to the welcoming of refugee and asylum seekers,” Tory wrote. “But responsibility for these populations does not end at the border, and we simply can no longer contend with their housing needs alone.”

Toronto’s mayor emphasized housing needs for asylum seekers are increasingly high. He said with the pace of refugees coming to Canada, and Toronto in particular, there would shortly be no shelters left for them.

The nearly 800 refugees who are currently lodged at residence offered by Humber and Centennial and some other colleges are at risk of being moved away as the summer break ends soon.

Tory said he has serious concerns about the situation and demands prompt actions from the federal level.

“Moving just this population of 800 would require the emergency closures of multiple community centres in neighbourhoods across the city and the cancellation of public programming,” something the city is not prepared for, he wrote.

Paul Caulford, co-founder and medical director of The Canadian Centre for Refugee and Immigrant Healthcare, said he stands by Mayor Tory’s welcoming newcomers and praised the city’s efforts in providing refugees with essential needs.

“What they’re doing in this city is amazing, how they’re coping with the increase,” Caulford said. “I fully support the mayor and what he had to say today.”

He said the city has been trying hard to accommodate refugees to Canada.

“I hope people out there get the message, we have been trying to make Canada a better place for everyone,” Caulford said. “But it takes efforts, time and much money to actually bring into action.”

He said refugees who have successfully immigrated to Canada have much to worry about, including housing, food, healthcare and education for children. Many of them also have significant medical requirements.

He suggested the provincial and federal levels should be more flexible in helping refugees find jobs and receive health care, child care, and education once they cross the border.

In a Tuesday news conference , Tory praised the “heroic efforts” of staff workers helping asylum seekers but reaffirmed the need for expansion of the facilities.

The City of Toronto believes in and supports Canada’s moral obligation to help those who need our help. But Canada’s responsibility to these families does not end at the border. pic.twitter.com/3nsJAF7tL0

“Right now, we’re saying, we have a problem and we need help,” Tory told reporters during the press conference. “We have exhausted our available sites, our resources and our personnel. We need the other levels of government to step up and assist Toronto in a true partnership.”

Tory said he and other government officials discussed several solutions for the refugee crisis, including building a transition centre in eastern Ontario as a temporary option.

He said a transition centre would reduce the pressure on Toronto and provide a “regional response” to the problem, which could also direct claimants to other municipalities.