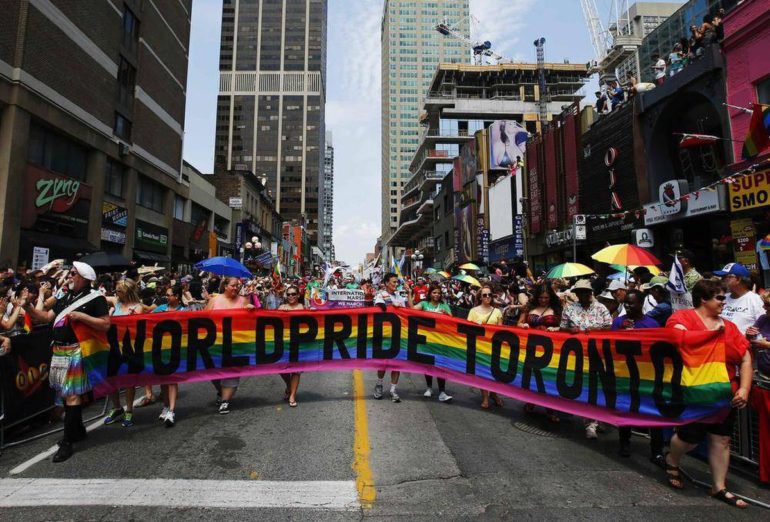 The debut of a new Heritage Minute recounting the story of gay activist, Jim Egan, is drawing attention to the fight for equality within Canada’s LGBTQ+ community.

The Pride Library, a library that includes a collection of books, periodicals, and audio-visual resources by and about LGBTQ+ people at the University of Western Ontario, tweeted their reaction to the short film, saying the film shows the community’s long history.

This is first time the LGBTQ community has been the focus of a Heritage Minute.

Even more key players have tweeted out their reaction in support of it.

And speaking of Pride. Proud of @HistoricaCanada for the first LQBTQ2 Heritage minute. Narrated by @kdlang https://t.co/o6EKt7QfCZ RT folks

Super proud to have worked on the first LGBTQ Heritage Minute, directed by @notstephendunn and narrated by none other than @kdlang. Watch the whole thing here and learn more about why Jim Egan is a true Canadian hero: https://t.co/uj4xLSwh5N pic.twitter.com/IdQlFmr6Qs

Egan, born in 1921, spent much of his life advocating for gay rights in Canada. The one-minute Heritage clip begins early in Egan’s career during the 1950s, when he was writing opinion columns in newspapers and fighting negative opinions of gay culture in mainstream media.

“He was a brave man, and a great role model,” said Donald McLeod, who is Egan’s biographer and the head of book and serials acquisitions at University of Toronto Libraries.

James Egan (right) and Jack Nesbit in 1948. Egan is the subject of a new Heritage Minute, the first with a LGBTQ2 theme in the series. (EI SCAN)

“He didn’t have to hide who he was as an openly gay man, and that’s how he presented himself, so he encouraged people to be open and be their authentic self,” he said.

In 1948, Egan met Jack Nesbit, which began their 52-year relationship.

In the 1980s, Egan and Nesbit were denied spousal support under the Old Age Security Act – a move that the couple took to the Supreme Court. The Supreme Court ruled against Egan on the issue of spousal benefits, but ruled unanimously to include sexual orientation as a prohibited grounds of discrimination under the Canadian Charter of Rights and Freedoms.

It was a ruling that has been described as “losing the battle but winning the war,” and it was one that eventually paved the way for the legalization of same-sex marriage.

McLeod first got involved with Egan when he came across his work as a volunteer at the Canadian Lesbian and Gay Archives in the 1990s. He found them so fascinating that he contacted Egan about writing a book.

Egan agreed and in 1998, they published Challenging the Conspiracy of Silence: My Life as a Canadian Gay Activist.

During the writing of this book, McLeod got to know Egan.

McLeod said that a key problem is that although he’s an important person, he’s not well known enough within the community.

“He’s known in certain circles, but not generally to the public, but I’m hoping this will help change it,” he said.

Todd Hauptman, a director at the Trial Lawyers Association of B.C. tweeted, saying the Heritage Minute not only educates Canadians about LGBTQ rights, but also sends a positive message to the community.

It almost brings me to tears how #canada has often led the way and continues to in the fight for human rights. Jim Egan, Sven Robertson and many others fought for #LGBTQ rights in our country. https://t.co/re51kd0EdW

Egan, who died in 2000 in Courtenay, B.C., changed the country’s history for the better.

Colin Mochrie, a Canadian actor and improvisational comedian, joined in support of the short film.