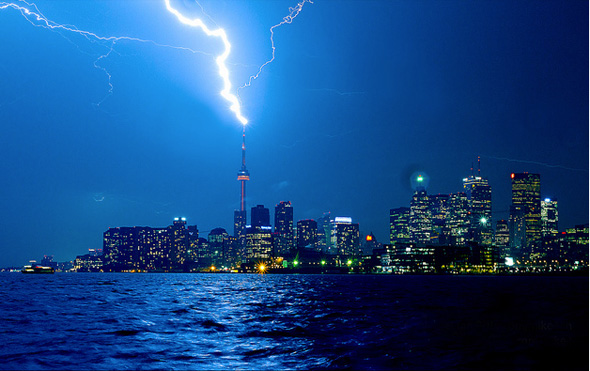 The weather leading up to the Canada Day long weekend in Southern Ontario is expected to be chaotic.

People should be readying their umbrellas for expected significant rainfall but they should also have sunscreen within reach.

Environment Canada issued a special weather statement where Toronto is set to witness a tempest of wild weather in the form of rainstorms, potential thunderstorms and heatwaves.

The agency reports heavy rain is anticipated to start Wednesday morning and proceed throughout the day. Environment and Climate Change Canada states the city can expect to see up to 53.5 mm in rainfall. Drivers should be careful on the potentially slippery roads while commuting.

“This is a slow moving storm system that started yesterday in the Iowa and Chicago areas that’s been moving slowly by the hours and has now caught us,” said Geoff Coulson, a warning preparedness meteorologist at Environment Canada.

“There is more shower activity in the southwest area that may gradually navigate towards Toronto adding to the heavy rain and thunderstorm,” he said.

Wednesday’s temperature will be 21 C, but humidity will make it feel closer to 27 C. Wednesday evening will be a low of 18 C, with more rain expected towards the end of the night.

Environment Canada said the precipitation should carry through to Thursday with a 40 per cent chance of severe thunderstorms and several showers in the afternoon. But Thursday will also be the kickoff of Toronto’s severe heat warning. The city is expected to see a high of 28 C during the day but with a humidex of 34 C.

People should expect strong heatwaves throughout the Canada Day long weekend, with Environment Canada predicting daytime highs in the low-to-mid 30s, expected to peak at 37 C on Saturday, with humidex temperatures reaching the mid-40s.

Towards the evening the temperatures will drop to the low 20s, but there is still no escaping the heat coming to the city.

“We could be looking at record high breaking heat temperatures during the Canada Day weekend, because the last time Toronto has experienced this type of heat was in August of 2016,” Coulson said.

Environment Canada says it is still uncertain when the heatwave will break but they suggest temperatures will remain high into the following week.