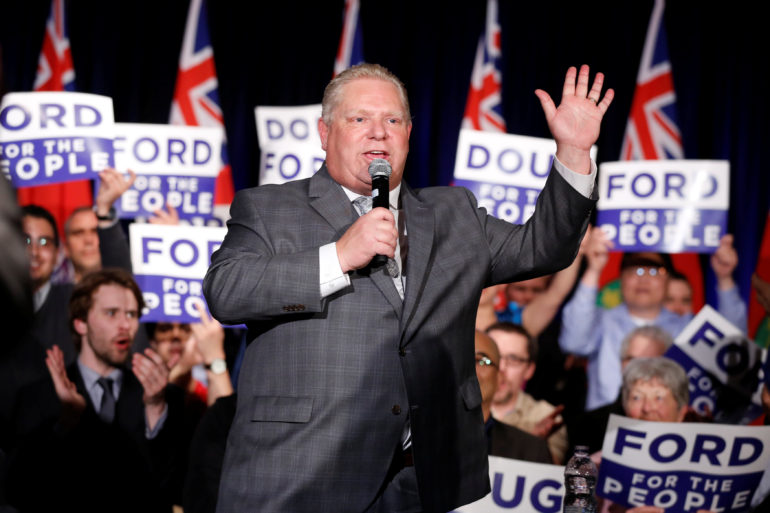 Doug Ford takes to the stage after being named Ontario’s next premier. (Humber News)

#FordNation rules Ontario as Doug Ford will be the province’s next premier.

The election was called shortly after 9 p.m., 20 minutes after the polls closed.

In his victory speech, Ford spoke directly to the people of Ontario.

.@fordnation takes the stage, blows a kiss to the crowd. “Thank you from the bottom of my heart. I will never forget the trust you put in me.” #onpoli #onelxn pic.twitter.com/x8JJOYMzvW

NDP leader Andrea Horwath who was unsuccessful in her bid as premier, expressed her gratitude for voters placing her party second in the polls.

“I am deeply humbled that Ontarians have asked us to serve as the new official opposition,” she said to a cheering crowd.

Congratulations to @AndreaHorwath on such a hard fought campaign

The people of Ontario have a strong leader in Andrea, who along with her team, will be a principled & fiercely progressive official opposition

It is a huge loss for the Liberals who won a majority government in the 2014 election and placed third in the polls, trailing far behind the NDP and the PCs.

Following the decimation of her party, Wynne announced she would be stepping down as Liberal leader in Ontario.

In her concession speech, she highlighted a list of her accomplishments as premier and called for a message of unity for the future of the province.

“There is another generation, and I am passing the torch to that generation,” she said. “I hope that you can feel very proud of what we have done together in the past and are absolutely determined to take on the task that lies ahead,” Wynne said.

A very classy and dignified speech by @Kathleen_Wynne, as she exits the political stage. History will be kinder to her than this election was. #onpoli #cdnpoli

In a historical moment, Mike Schreiner won the Guelph riding, officially giving the Green Party a seat for the first time in Ontario.

Thank you, Guelph. The Green wave is officially in Ontario!!!

This time around there were more ridings than ever up for grabs, with the expansion of 15 new ridings in 2015 and an additional two-newly created ridings in 2017, bringing the number of seats available to 124.

As Wynne’s popularity dwindled throughout the election – which began on May 9 – falling into third place in the polls behind Horwath and Ford, the decline of Liberal-held ridings gave the PCs and the NDP a fighting chance to swing voters in their favour.

Ford began the campaign with a commanding lead in the polls, but began to slip from first place as Horwath picked up steam and attracted voters who typically supported the Liberals in the past.

The Liberals’ unsuccessful campaign to regain the trust of Ontarians ultimately led to the collapse of the party and in a shocking and unprecedented move, Wynne conceded defeat on June 2 – five days before election day.

Despite her admission, Wynne urged the province to still vote for Liberal in order to prevent the PCs and the NDP from attaining a majority government.

Throughout the weeks before and during the campaign, members of all the main political parties found themselves in hot water.

Patrick Brown resigned as PC leader after CTV reported accusations of sexual misconduct during his time as a federal MP. His departure prompted the party to quickly elect a new leader, Ford, to steer the Progressive Conservative ship.

During the campaign, the PCs faced controversial allegations against Brampton East candidate, Simmer Sandhu, after data from 60,000 407 ETR customers was breached. After his resignation, Sandhu was promptly replaced by Sudeep Verma.

Tanya Granic Allen, who ran unsuccessfully for the PC party leadership, was also replaced in the Mississauga Centre riding after a past video featuring Allen’s views on same-sex marriage was revealed.

Ford remained a focus of scrutiny throughout the election campaign which culminated in a lawsuit from his sister-in-law three days before election day.

The statement of claim alleged that Doug Ford and his brother Randy mismanaged the estate of their brother, former Toronto mayor Rob Ford, depriving his widow Renata and her two children of millions of dollars.

The NDP also faced criticism during the election when previous social media posts were discovered from a number of party candidates embracing questionable ideologies.

Laura Kaminker, candidate for Mississauga Centre, who made past remarks on social media, claimed the poppy was made from prison labour and questioned the events of September 11.

A 2006 photo of Gurratan Singh – younger brother of federal NDP leader Jagmeet Singh – showed the candidate holding a sign with the words “F*** the police.” Singh quickly apologized and recanted his previous opinion.

NDP leader Andrea Horwath was also targeted for her views after she revealed during a Toronto Star roundtable discussion, relating in part to the ongoing strike at York University, that she would never use the power of the legislature to end a strike.