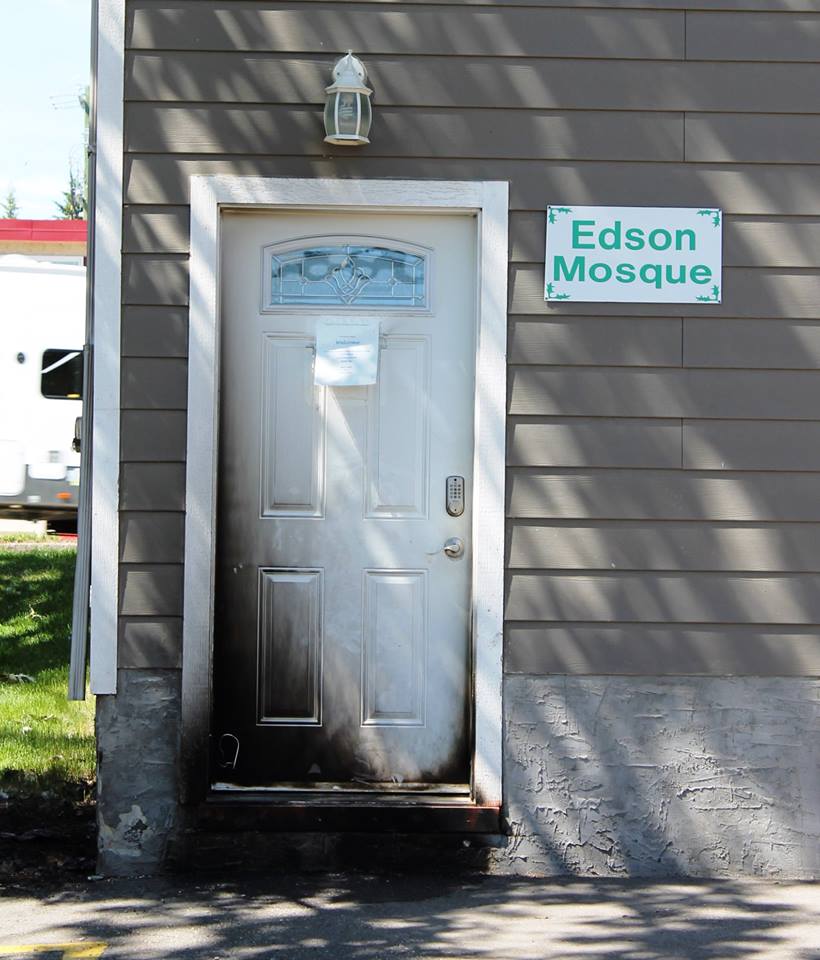 Edson Mosque was attacked in what Muslim organizations describe as a hate crime related arson on June 16, 2018. No one was injured in the suspected arson. (Facebook)

The fire at a mosque in Edson, Alta., last week, is under investigation as a possible arson by the RCMP as Islamic groups suspect it was a hate crime.

The fire occurred the day after Eid-al-Fitr, the Muslim celebration that marks the end of the holy month Ramadan. The building was built using fire-resistant material five years ago and survived with soot and scorch marks on the exterior of the building. Nobody was injured as the incident occurred after the late evening prayers on Saturday.

Security footage outside the mosque showed a person in a black hoodie holding a red jerry can leaving the premises in the town about 200 km west of Edmonton shortly after 11 p.m. Saturday. Firefighters arrived at the scene about 15 minutes after it was reported to extinguish the blaze.

The National Council of Canadian Muslims are tracking the fire as an anti-Muslim incident. However, the RCMP continue to investigate it as a arson and have asked anyone with information to step forward.

RCMP released a security camera image of who is believed to be the suspect. (RCMP handout)

“To do this at such a time when Muslims across the country are celebrating Eid, it really is a cowardly thing to do,” said Leila Nasr, communications coordinator of the National Council of Canadian Muslims. “It’s the most special time of the year for a lot of people so it’s was really unfortunate that it happened at that time.”

She said the incident occurred around the time when extra prayers and events occur at mosques and Islamic centres. Nasr said she’s thankful no one was hurt by the fire but the primary concern of patrons of the mosque were explaining the incident to their children.

“I think it’s important to recognize that what happened at the mosque, although it’s the first time that the particular mosque was targeted by an act of hate, it didn’t happen within a complete vacuum. when you look at a provincial level or a national level we are seeing an increased trend in Islamophobic incidents. Many of which involve violence,” Nasr said. “Attacks like what happened at the Edson mosque, smaller incidents of islamophobia often go unreported and this is something that the NCCM looks at very closely.”

This is the fifth act of vandalism against a muslim organization reported this year, according to the NCCM data map.

“The Alberta Mosque and the Quebec mosque shooting and all these big events, they’re certainly in the front of out minds, but we also need to remember and to analyze the smaller things that happen everyday that contribute to the environment in which people who already hold hateful ideologies or Islamophobic ideologies fell embolden to act on them in big ways.”

The NCCM released a press release condemning the act and posting information on how to keep communities safe.

“We strongly denounce this cowardly act of arson against a mosque, particularly when Canadians Muslims across the country are celebrating Eid ul-Fitr, which marks the end of the Ramadan,” NCCM Executive Director Ihsaan Gardee said in a press release. “We are relieved no one was hurt in the attack and we stand in solidarity with the entire Edson mosque community at this difficult time.”