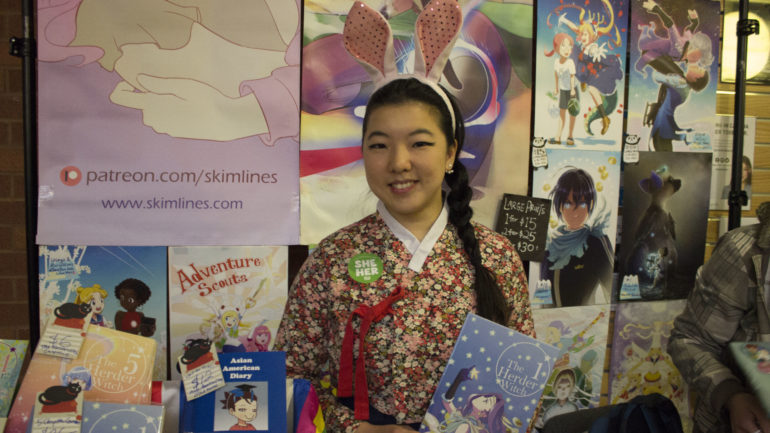 Some children stared wide-eyed as they saw themselves represented for the first time ever in print, making their dreams of becoming superheroes themselves that much more reachable.

The Toronto Comic Arts Festival was a two-day exhibition between May 12-13 that featured hundreds of creators from across the globe.

It’s also a way to increase representation and mindfulness in the lead up to Pride Month in Toronto in June.

One creator at the festival was comic book artist Soojin Kim, who said she presented pieces she wished she could have seen when she was younger and just moved to Canada from Korea.

“When I came here, I saw that there was just nothing good for me. There was Charmed on television and other things, but I didn’t see a lot of anime or books that I was used to, and I thought it would be nice if we had these kinds of books as well,” Kim said.

“So that’s the kind of books I’m working on now. It’s lots of magical fantasy and diary comics, slice of life, softer things.”

Struck by lack of diversity

To Kim, whenever she attends a comic book convention, she is often struct by the lack of diversity in the work on display.

She told Humber New she has always felt out of place when consuming mainstream media, and knows that children who are just like her when she was a little have the same, discouraging experience and need positive representation of themselves.

Being able to initiate that representation is the most rewarding aspect of art for her, she said.

“Sometimes, I’ll meet the one Korean family with the one eight year old girl, and her face just lights up when she sees me, because she’s like, ‘Oh, wow! There’s a person I can look up to that I don’t have to fantasize they’re Asian,’” she said.

Kim will attend FanimeCon in California next week and A-Kon in Texas in June, continuing her work on giving a voice to underrepresented cultures.

Cynthia Yuan Cheng was another artist at the Toronto festival paving the way for better representation in her communities.

She showcased a lot of identity-based artwork based on her own experiences. Her autobiographical comics, in particular, reflected on issues of gender identity, giving lessons of acceptance for both herself and others.

“Someone once bought one of my Love Life of a Handsome Girl comics, which is my autobiographical comic about my first relationship,” she said. “It’s kinda queer, kinda a romantic comedy, but also kinda sad and talks about how my family deals with it.”

“The person who bought my comic on the first day came by the next [day], and said that it was really meaningful for them and moving. And just for them to come back to let me know how much it meant to them was something I remember, and I’m really moved by.”

Cheng’s next graphic novel will be about the time she played high school football on the boy’s team.

“When other people know what you’ve gone through, even if it’s not a perfect match with what they’ve gone through in their own lives, there are emotions that impact them,” Cheng said.

Dylan Edwards with the second volume of his science fiction comic, Valley of the Silk Sky. (Amy Chen)

Dylan Edwards, who was at the library event and whose comics feature queer protagonists, said it’s important for people to see themselves reflected in the media they are consuming.

People ‘get overwhelmed and very emotional’

He says it means a lot to him when his fans visit and revisit him during conventions and have conversations with him about how meaningful his comics have been to them.

“Oftentimes, people get a little overwhelmed and very emotional and find it almost very difficult to talk about,” he said. “But I have had people come up and say my comics have really helped them figure themselves out.”

At the festival, Edwards debuted the second volume of his science fiction comic, Valley of the Silk Sky. He is currently working on the third part of the story as an ongoing project, and will be attending the feminist science fiction convention WisCon next week.

To a comic book fan like Colleen Parker, supporting artists like Edwards who diversify their work with LGBTQ and feminist themes is really important. At the Toronto Comic Arts Festival, she made it a mission to buy work directly from the artists themselves.

“Not everyone’s picked up by big retailers, so buying directly from the artists means that they get paid,” she said. “There is a ton of queer comics here. I’ve been taking pictures and taking a bunch of cards for friends and things like that. I think it’s very helpful. There have always been a lot of characters with disabilities, too, which I think is sorely underrepresented in mainstream comics.”

Parker is also an artist herself, and part of the art improvisation group, Super Art Fight. She loves participating in its art-based comedy shows while dressed up as different characters. To her, cosplaying and drawing are cathartic ways for people to be themselves and be the representation they have always wanted.

Stacey Singh was another attendee of the festival, and as an art student, she was glad to see a lot of LGBTQ representation.

“It’s a really big thing to me. As of recent, you’re kinda seeing it being more accepted, so to see it in books and stuff, it really shows that it’s something people really like seeing,” she said.

Making games accessible was another theme of the festival. The Hand Eye Society featured game developers from all over the GTA.

Han Jiang demonstrated his cross-platform game, Trap Labs. The game is based on a niche custom map from the Starcraft days, where players had to spot the patterns of traps and try to get across the map without dying.

“You can actually play Trap Labs against and with people on PC and android and iOS at the same time,” he said. “The controls are very friendly for mobile and PC. I wanted to make that experience cohesive through a lot of platforms.”

The game will be coming out in mid-June on both Steam and mobile.

Making more waves in mobile gaming was developer Sunny Lee. His game, Salad Hunt, is a kitchen destruction game in the style of an arcade shooter. Players act as the chef, with the mission of defending their kitchen from an invasion of mischievous characters.

The game was inspired by a conversation with his brother, who worked in Hong Kong and craved more leafy, green vegetable options in menus while he was there.

While Salad Hunt is their first game, they nonetheless wanted it to have an easy learning curve.

“The idea was to make the game as simple as possible. That’s why we’re based on an arcade-style shooter. Since it’s on a mobile platform, you can just use the hand interface, so all you have to do when something moves, is just tap away,” Lee said.

Meanwhile, Dungeons & Dragons player Shel Kahn, showcased her storytelling and artistic skills with her own tabletop adventure game. To her, the game had to be functional at a table and let players create their own characters. These characters could be representations of the players themselves as they travel through a town affected by magic gone wrong.

Kahn thanked the Hand Eye Society for getting the Toronto community to participate in events like the Toronto Comic Arts Festival, since they support not only creators who want more diversity and accessibility in games, but also provide mentorship and education for future game developers.

“Right now, the game has been in development for almost a year. We’re hoping to make it 2019 for a supporter release. The goal is to finish it as much as possible this summer to show at even  more events, and then really ramp up the marketing for it,” she said.

The game was inspired by Paraguayan folklore, which is near and dear to Aveiro-Ojeda, since it is part of her family culture.