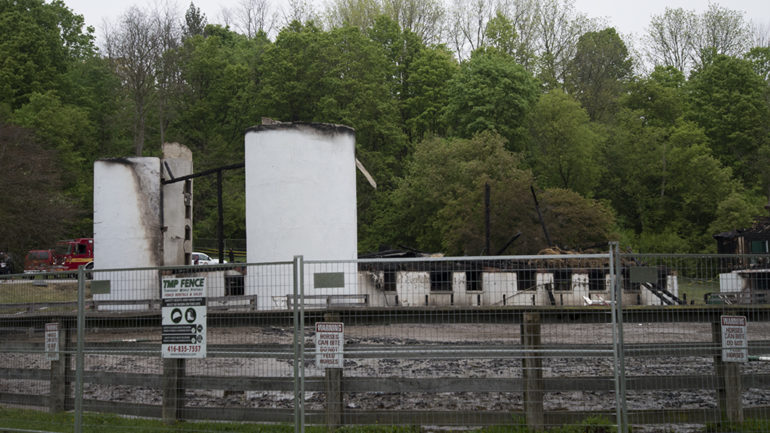 A memorial at Sunnybrook Stables to the horses that lost their lives. (Bobby Mihalik)

Toronto police and fire officials were still on the scene at Sunnybrook Stables Tuesday morning, after a fire over the weekend that killed 16 horses.

The fire, which began in one barn before moving to another, destroyed a stable in which the 16 horses were kept. Another 13 horses were rescued from the second barn before firefighters put out the fire.

The location of the destroyed barn has been enclosed by fences and police tape as the cause of the fire is being investigated. Clean up crews also worked at clearing ash and debris that was strewn across the surrounding park.

People with emotional and personal connections to Sunnybrook were also there, creating a small memorial at a tree just outside the stables. Flowers, letters, and even a horseshoe were left to pay tribute to the horses lost in the fire.

Keri Corbiere, who left a bouquet at the memorial, began riding at Sunnybrook when she was 14. Though she no longer rides there, the stables are still a special place for her, providing a calm while she undergoes chemotherapy treatment.

“I know it says not to feed them, but I’d give them some grass and pet them, and they’d calm me down before or after my treatment,” she said.

Julie Coppinger has been riding at Sunnybrook for the past 16 years. For her, like Corbiere, the stable is a special place that provides comfort in her darkest hours.

“I’ve had some family tragedies, and this was my safe place to come and get well,” she said. “They’re my dear old friends. I’m heartbroken.”

One of Coppinger’s favourite horses, Mr. T, was among the 16 horses who died.

The horses that were rescued were transported to the Horse Palace at Toronto’s Exhibition Place, Sue Iwan, a manager and certified coach at Sunnybrook, wrote in a Facebook post. The post also says the horses have been examined by a veterinarian and “are well.”

As the clean up and investigation continues, Coppinger hopes that Sunnybrook and the animals who call it home can recover from this tragedy.

“I hope it can get back on its feet, for everybody here,” she said.

For more images of the aftermath of the fire, see below.