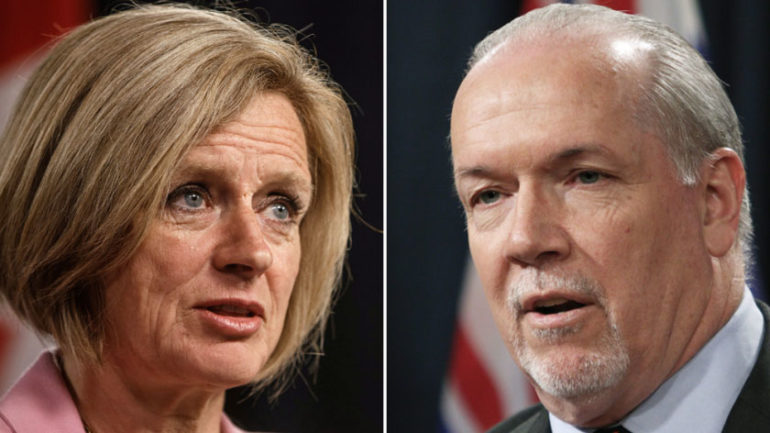 Alberta Premier Rachel Notley (left) will not be attending the Western premiers’ meeting May 23, due to an ongoing Trans Mountain Pipeline dispute with B.C. Premier John Horgan (right).  Photo Courtesy of Canadian Press.

Canada’s Western premiers are set to meet tomorrow in Yellowknife, N.W.T., but Alberta’s premier will not be in attendance.

Rachel Notley announced last night via Twitter that she will not be attending the meeting and instead will be sending Deputy Premier Sarah Hoffman.

Notley stated she will be staying in Alberta to focus on the May 31st deadline for the Trans Mountain Pipeline project.

With 10 days remaining before Kinder Morgan’s deadline, my only priority is to make sure the pipeline gets built. So, I won’t be going to the Western Premiers’ Conference this week. Deputy Premier @shoffmanAB will be attending the conference on my behalf. #AbLeg #bcpoli

It would be surreal and exceptionally tone deaf for anyone to think we could politely discuss pharmacare and cannabis when one of the players is hard at work trying to choke the economic lifeblood of the province and the country. #ableg #bcpoli

The deadline put in place by Kinder Morgan last month has been a hot button issue for Notley. So much so that Bill 12 is currently going through the Alberta legislature to restrict oil and gas exports to B.C.

Cody Battershill, of Oil Sands Action, a not-for-profit group based in Alberta, says he supports Notley’s decision to pull out of the meeting.

“The May 31 deadline is looming, the federal government has openly condemned Horgan’s actions but we are still waiting for action,” Battershill said.

“The federal government has said that this is a national issue, but we are still waiting for action,” Battershill said.

Every day we wait we are selling our oil at a cheaper rates, costing job opportunities and possibilities for investment, so I think that for those reasons it is the right decision by Notley he said.

“If Horgan is ok with buying oil from Washington State but not from Alberta we have a bigger issue at hand here,”  Battershill said.

It is unclear what the outcomes of this deal will be but it is creating a riff between the western provinces. Kinder Morgan has stated that this project would create 37,000 jobs fro Canadians and would inject 7.8 billion into Canada’s economy.

Saskatchewan Premier Scott Moe is backing Rachel Notley and the Alberta government. Moe tweeted today stating he and Saskatchewan government will be bringing up the pipeline issue at tomorrow’s meeting.

We’ll be advocating for SK interests at west Premiers meeting incl on issue of pipelines, to get our resources to world markets

As a province looking for continued access to Cda’s coastline SK will keep fighting for our constitutional right to get our exports to port & to market https://t.co/DMmb505D4N

After taking some backlash for choosing not to go to the Premiers meeting, Notley tweeted this statement:

This is about more than a pipeline.
It’s about our country’s ?? ability to create jobs and attract investment.
We have to show that we can make decisions that respect the rule of law, that we can get things done, and @KeepCanWorking.#ConfidenceinCanada #ableg #abpoli #cdnpoli pic.twitter.com/d61R7xXpPX