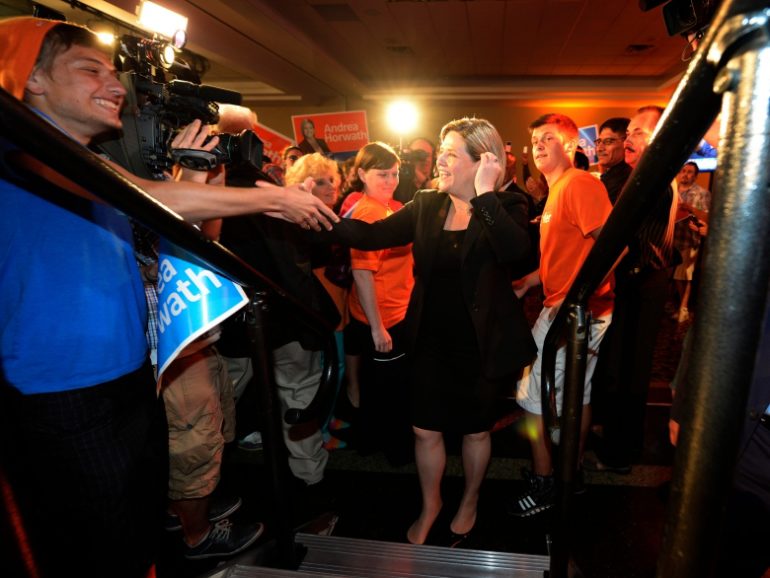 The latest poll from IPSOS Canada reveals the NDP has moved beyond the Liberal government in the polls and the gap between the NDP and PC party is narrowing.

Yet, recent talks this weekend of a coalition between the NDP and Liberals could potentially cut into the gains the NDP showed in the polls lately, Western University political science professor Paul-Nesbitt Larking said. Everyone needs to get on board with the idea, including the electorate, he said.

“Actors in the provincial parties or those elected depend on the agreement of the members of those elected and the general public, and what they think,” Nesbitt-Larking said.

Individually, according to an IPSOS poll of 1,000 Ontarians conducted Tuesday morning for Global News, the NDP has overtaken the Liberals as the ‘Anti-Ford’ party with a 35 per cent lead to 22 per cent. The Ontario PC party is currently leading with 40 per cent.

Over the weekend, NDP leader Andrea Horwath toyed with the idea of a coalition government at a meeting in Brampton where she said an NDP government would build a third hospital. In a statement, she said she would take a wait-and-see stance but made it clear she would not support another party that imposes an austerity platform.

“What would be far more likely would be an accord,” Nesbitt-Larking said. “We have had accords before. We’ve had one before, and we can do it again.”

Liberal Premier David Peterson and NDP leader Bob Rae crafted an accord in 1985.

NDP Etobicoke Lakeshore candidate Phil Trotter says he is happy with the polls and that support for the NDP is mounting.

“It feels good. this time a lot of people are decided NDP-Liberal voters.  People are saying we support this time in a way that feels different this year.  It feels like we’re in a strong second place,“ he said.

“I even get some Ford voters that normally vote PC and are still considering us, and that they could swing our way and I think some of the liberal voters are hanging in there, but may change their lead,” Trotter said. “We hope our growth continues and that we win the election, and people don’t have to change between that or worse.

“We are the party that will take care of the people,” he said.

Trotter said he is using his platform to connect with communities by restoring public services, including putting Hydro back into public hands and extending healthcare to include pharmacare and dental care.

“We’ve got a great plan,” he said. “We want to bring affordable childcare at an average cost of $12 a day, and make it free for families that earn less than $40,000 per year. We’re talking about bringing dental care and pharmacare for people who don’t have coverage for their work, and bring hydro back into public hands”

The Liberals have been critiqued earlier this year for making a spending spree of campaign promises late into their term and privatizing hydro.

But, according to Nesbitt-Larking, it’s still early in the campaign, and campaign outcomes can change dramatically.

“Until the people have spoken and people have cast their ballots and we have a firm knowledge of which parties can gain, none of the major parties can rule out the possibility that they’re going for a majority,” Nesbitt-Larking said.

Trotter stated quite assuredly he is not against the idea of a NDP-Liberal coalition,

“Personally, if we were in the position to stop Doug Ford, I’d hope my party would consider it,” Trotter said. “The NDP and Liberals have worked together in the past, and the focus is on winning the election because it’s a real possibility.”

However, he said that a majority government could allow the NDP to fulfill the changes it plans to propose.

“We’re most confident if we have a majority government we can bring all these positive changes our plan proposes,” Trotter said.

This is Trotter’s second election campaign. He is committed and has pledged to spend his day campaigning by knocking on doors, and lots of them, and putting his work aside to do “full-time campaigning.”

Trotter believes the battle for the Etobicoke Lakeshore riding will be a two-party fight between the NDP and the PCs.

“It feels like most people want to see change,” he said. “We’re prepared to make this country great.”