“If Crisis or War Comes”: Sweden sends out survival pamphlets to 4.8 million homes 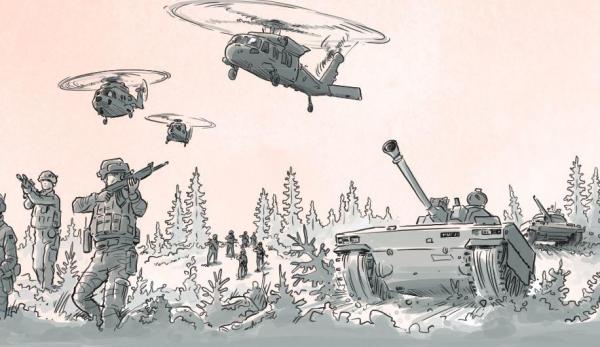 The cover of the “If Crisis or War Comes” pamphlet delivered yesterday to the population of Sweden.

Tanks, fighter jets and soldiers are juxtaposed with beautiful Swedish landscapes on new war preparation pamphlets that have everyone asking questions.

“If Sweden is attacked by another country, we will never give up,” according to the pamphlet issued by the Swedish government.

The Swedish Civil Contingencies Agency (MSB) sent the war survival pamphlets to every household in the country for the sake of what if.

The pamphlet also shows citizens where to find bomb shelters and how to contribute to Sweden’s “Total Defence.”

“One could say that this follows the Swedish tradition of informing its citizens about security and preparedness (when it comes to crises),” Per Sjögren, Ambassador of the Embassy of Sweden in Ottawa, told Humber News.

The Ambassador also denied any rumours about the country looking to join NATO, and instead said they are definitely collaborating with the organization.

“The quest of the government is to prepare the people for various crisis and an extreme is war, but it’s meant mostly to be prepared in many crisis situations, it could be extreme weather, failure of power and more,” Sjögren said.

Although useful the pamphlets come as a bit of a surprise as this would be the first time since WWII that Sweden has taken a step such as this one.

This is the actual brochure passed out in Sweden from 1943.
My Swedish mother sent it to me when I shared your tweet.
The title translates to ‘If War Comes’ pic.twitter.com/2CVTUqePkN

Sweden has stayed neutral when it comes to matters of war for 200 years. The pamphlet has raised some eyebrows among Swedish citizens and the rest of the world.

The last couple of years have been so disruptive that, on occasion, I’ve struggled to keep anxiety in check & been tempted to go all survivalist. You are not helping Sweden. #incaseofWarhttps://t.co/0HoNqAO8wH

Stockholm has repeatedly cited Russian aggression as the reason for a series of security measures including the reintroduction of conscription this year and the stationing of troops on the Baltic island of Gotland. Sweden has not been at war with anyone for more than 200 years. https://t.co/wajXpjDXGc

The MSB said that those who live in Sweden need to become better prepared for the consequences of everything from serious accidents, extreme weather and IT attacks to, in the worst-case scenario, war.

“Society is vulnerable, so we need to prepare ourselves as individuals,” said Dan Eliasson of the Swedish civil contingencies agency, told Sveriges Radio . “There’s also an information deficit in terms of concrete advice, which we aim to provide.”

The brochure was delivered to 4.8 million Swedish households but is also readily available online for download and can be accessed in different languages. The MSB is also running a contact centre until June 29th, answering any questions people may have regarding the initiative.

The release of the pamphlet is being advertised as a caution and nothing more.

“When we say civil defence, we mean all civil activities in society, including medical care, including shelters of course, including private companies, everything. Local communities and all their obligations,” Akesson said. “It’s a total mobilization of the country and planning for how to put all forces in society in the direction of solving, in the worst case, a military attack,” said commission secretariat chief Tommy Akesson in an interview with Defense News.