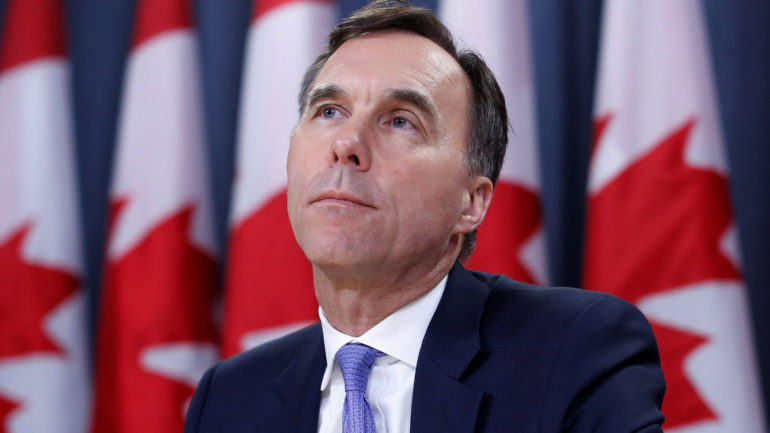 The agreement was approved by cabinet during an early morning meeting and the deal is expected to go through in August pending approval from the Kinder Morgan board, Morneau said.

The move comes just two days before Kinder Morgan’s May 31 deadline to decide if it would proceed with the expansion project, which would see a new pipeline from Edmonton to a port in the Vancouver area.  The pipeline would give landlocked Canadian crude greater access to foreign markets.

It was a move that made Alberta Premier Rachel Notley’s day.

“Pick up those tools, folks,” she told reporters Tuesday afternoon in Edmonton. “We have a pipeline to build.”

While the federal government says it does not intend to be the long-term owner of the project, Morneau said this was a necessary step in order to ensure investor confidence and ensure the project will get built.

“It must be built and it will be built,” Morneau said.

The purchase allows Ottawa to exert federal jurisdiction on the pipeline project. The federal government says the move will push the project forward without worry of political interference from B.C.

“This deal had to happen because of the delays caused by the NDP government in B.C.” said Morneau.

Canada will offer federal loan guarantees to ensure construction continues through the 2018 season as part of the deal with the company, a unit of Houston-based Kinder Morgan Inc .

“So our message today is simple: when we are faced with an exceptional situation that puts jobs at risk, that puts our international reputation on the line, our government is prepared to take action,” Morneau told reporters in Ottawa.

Kinder Morgan set the deadline in part due to frustrations with delays caused by the B.C. government, which is concerned about possible oil spills.

Alberta’s Role in the deal

Notley took to Twitter to voice her approval of the move by the federal government.

This is a major step forward for all Canadians.
We have met the deadline.
This project has more certainty than ever before.
We won’t stop until the job is done!
I’ll have more to say later this morning. #KeepCanadaWorking #ABleg #ABpoli #TMX

“This is the most certainty that this project has ever had,” Notley said.

Alberta will invest up to  $2 billion in indemnities to ensure the project will go ahead, she said. Notley said this indemnity means that Alberta will have a stake in the project so if the federal government does decide to sell the project, Alberta can decide if it wants to sell or keep part of it.

Construction is set to commence within the next few weeks, and the finalized deal is pending approval.  The project aims to expand Canada’s ability to export oil to players other than the United States.

Premier Horgan, in a news conference this afternoon, said the purchase of the pipeline does not change his concerns.

“The good news is that now I know the owner I have his number and I can call about my concerns,” he said.

“I continue to have concerns about the potential adverse consequences of a spill on our marine environment, on our coast and the consequences to our economy,” Horgan said.

B.C. will not change its plan to contest the exclusive federal jurisdiction surrounding the project in court.

“The reference case will go forward unless I hear something different today,” said Horgan, who does not expect protests against the pipeline to end.

Horgan says that there is a high degree of risk for B.C. and its coast, and he has maintained that position from the beginning. Horgan says the the decisions made today effect tax payers and all British Columbians are on the Prime Minister and the Minister of finance.

“Accountability now falls on the federal government,” he said.

There are still many indigenous and environmental groups who will fight this project said Horgan.  Mike Hudema of Greenpeace Canada took to twitter to express his concerns with the pipeline purchase.

According to Kinder Morgan’s company’s website, the revenues created from the construction, and the  expansion operations would be a combined revenue of $46.7 billion, with $5.7 billion for B.C., $19.4 billion for Alberta and $21.6 billion for the rest of Canada. These numbers are for the first 20 years of the expansion.