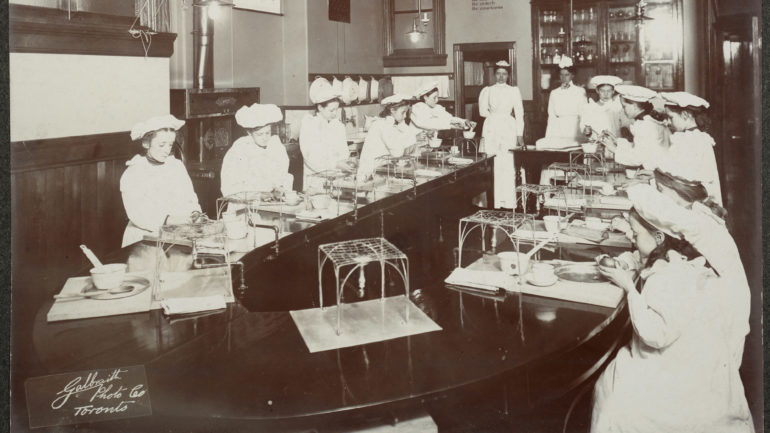 Toronto Public Health statistics show there are just over 17,000 food establishments in the city — several of them boasting fusion cuisines and modern takes on traditional classics. But it wasn’t always like that.

A walking distance from Kensington Market and a slew of modern restaurants, a new exhibit at the University of Toronto shows people how mostly women shaped Toronto’s food culture. The material was donated to the university by Mary F. Williamson.

Mixed Messages: Making and Shaping Culinary Culture in Canada at Thomas Fisher Rare Book Library, presents a selection of old cookbooks and recipes, among other things. The archives, dating back to the mid-19th century to the 1970s show how necessity drove women to create new combinations and recipes from ingredients that were available.

“[Colonialism] had a big impact on the development of early Canadian culinary identity because they were trying to tame wild parts of the country and trying to learn how to survive with new ingredients, new settings without ready access to medical technology and farming technology,” said Liz Ridolfo, who is a special projects librarian and one of the four curators of the exhibit at the rare book library.

Women were considered as the main figures that influenced this culture, but the women who wrote most of the recipes were of high status and privilege, Ridolfo said.

“It was mostly women who had access to the means of producing texts,” she said. It wasn’t until magazines started featuring readers’ recipes that the field opened up to a wider population of women.

Indigenous ingredients like corn and squash were also used in women’s recipes, but the foods were taken without being “lauded as coming from the Indigenous population,” Ridolfo said. It’s not until later that Indigenous influence was recognized for being a significant part of Canadian culinary identity.

New technologies and mass produced artificialized food freed up a lot of time for women in the kitchen, Nathalie Cook, who is a professor at McGill University Library and another curator of “Mixed Messages,” writes in the exhibit’s consolidated catalogue.

The exhibit comes at a time when the city is opening up to its large number of food and street festivals like the Taste of the Danforth, which runs between Aug. 11 and Aug. 13.

Ted Blackbourn, a Nova Scotia resident who formerly lived in Toronto, visited the university exhibit and highlighted the process of documenting daily recipes and medical advice.

“I like to cook myself, so it’s interesting to see the history of cookbooks and the way people kept track of recipes and the corporations trying to push their products through recipes,” he said