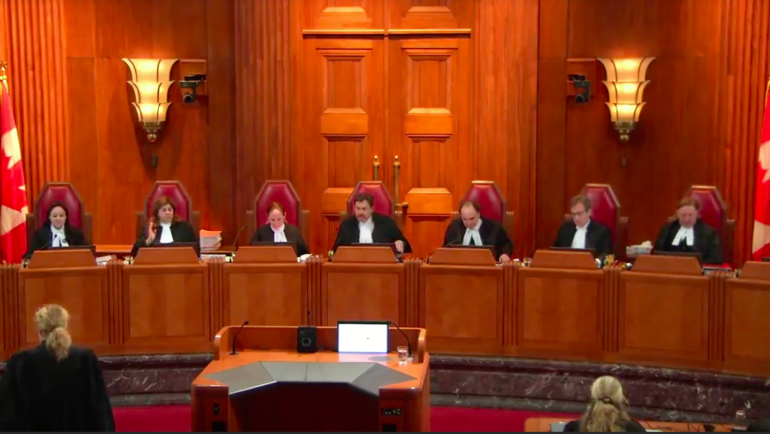 Seven Supreme Court Judges listen to the Crown and Defence during the Stephan’s appeal process in Alberta. (Photo/Supreme Court of Canada Webcast)

An Alberta man granted a retrial with his wife in their son’s meningitis death says he is looking forward to clearing his name and says the whole truth isn’t out yet.

“In the light of truth and love, we look forward to exposing this corruption as it will serve to uphold the God given liberties that are paramount in maintaining the sanctity of parents and the family,” David Stephan wrote on Facebook.

In 2016, Stephan and his wife Collet were originally found guilty for failing to provide the necessaries of life for their 18-month-old son Ezekiel. They treated his bacterial meningitis with a mixture of onion, hot pepper, garlic and horseradish as a home remedy.

He later died in hospital.

On Tuesday, seven Supreme Court of Canada justices agreed with the Stephan’s legal team that the original trial judge erred in the handling of their case.

Following the decision, David Stephan took to social media and said that this will give him and his wife a chance to identify those responsible.

“Even though the idea of enduring 4+ weeks of court is deeply uncomfortable for us, we take comfort in knowing that aside from the medical evidence that is still withheld or destroyed, the whole truth will be established and the tremendous lies surrounding the passing of our son will be exposed,” Stephan wrote.

Supreme Court Justice Michael Moldaver said that the judge presiding over the case conflated two elements of the offence to be decided by the jury, and failed to clearly explain the concept of marked departure in a way that the jury could understand it.

“Accordingly, we would allow the appeal, quash the convictions and order a new trial,” he said.

With none of the evidence in question, a judge or a jury will have to hear the same story all over again. It is uncertain whether a new trial will result in a different outcome.

Karen Molle, David Stephan’s defence lawyer, was not available for comment at this time.