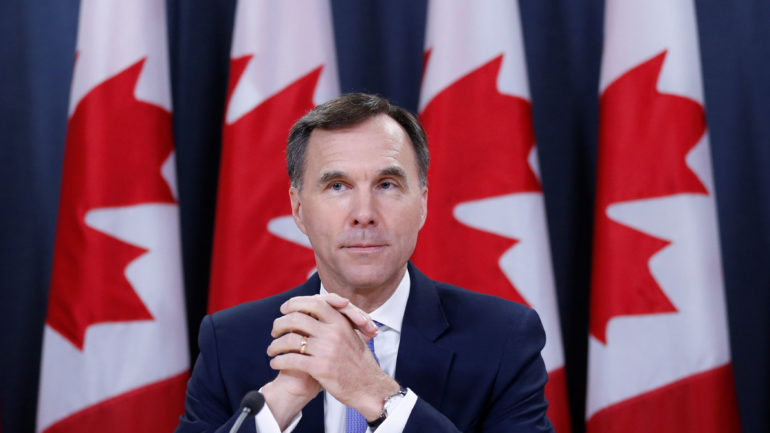 Canada’s Finance Minister Bill Morneau takes part in a news conference about the state of the Kinder Morgan pipeline expansion in Ottawa, on Wednesday  May 16, 2018. REUTERS/Chris Wattie

Morneau spoke to a small group of media in Ottawa. The press conference comes after Prime Minister Justin Trudeau faced tough questions Tuesday about the project in Alberta.

The pipeline project that has been approved by both federal and provincial governments has faced delays due to protests and concerns about the project’s environmental risks. Most recently there have been protests because of Horgan’s calls to cancel the project.

He also said the Canadian government will compensate Kinder Morgan for costs associated with any delays.

Owing to delays and concerns, Kinder Morgan has given the Canadian government a deadline for negotiations. Kinder Morgan is an infrastructure company specializing in oil and gas pipelines based out of Houston, Texas.

It has said that if a deal is not completed by May 31 then it will be pulling out the project.

Morneau used his press conference to respond to Kinder Morgans deadline, as well.

“Should Kinder Morgan not wish to continue, we feel that there are other private sector actors who would,” said Morneau.

The Trudeau government does not expect a private corporation like Kinder Morgan to handle disputes between governments, said Morneau.

“As a government we need to ensure that the rule of law is respected and that investors have the certainty needed to complete the Trans Mountain expansion project because it’s in the national interest to do so,” said Morneau.

1) My hot take on Trudeau/Morneau Transmountain presser this morning (thread). First, they blamed John Horgan for the situation. Finger pointing doesn’t bring about investor confidence. Leadership does. No announcement this morning about how they plan to enforce fed jurisdiction.

Rempel went on to question much of Morneau’s comments and the moves by the federal Liberals. “[Justin] Trudeau is gambling away hundreds of thousands of Canadian jobs,” said Rempel.

She said the federal government’s unwillingness to enforce its jurisdiction will affect more than just the Transmountain project and will have negative effects on foreign investment.

Also on Wednesday, Alberta Premier Rachel Notley referred in a Tweet to the Kinder Morgan issue, talking about the importance of both jobs and protecting the environment.

While we continue our work to grow our economy, create jobs, and support our Climate Leadership plan, across the country – including in B.C.- support for the Kinder Morgan Trans Mountain Expansion project is growing. #ableg #abpoli #cdnpoli @KeepCanWorking pic.twitter.com/PDVl6fjwyC