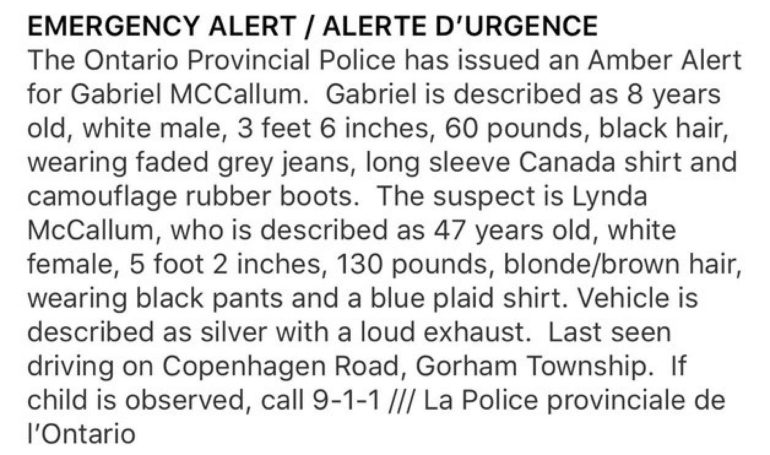 An Amber Alert issued for a missing eight-year-old boy in Thunder Bay set off alerts all across the province yesterday. The boy from Gorham Township was reported as missing at 9 a.m.

The Amber Alert was cancelled once the boy was located three hours later at a nearby Tim Hortons.

Ontario AMBER Alert has been cancelled.

The child has been found safe.

Amber Alerts are announced on social media as well as SMS text messages. However, some people were upset about the new mobile emergency system, which caused some cell phones across Ontario to sound off.

I ultimately received three force push alerts about this event, none of which were relevant to me or my region. This over-use delegitimizes the emergency alerts system for end users by making them an ignore-able distraction.

Many were not bothered by the alerts and vouched for the importance of receiving them, and this Twitter user urged others to be more empathetic towards the situation.

Actually, once isn’t enough, I saw some people miss it – it takes people a number of times to remember info, and if it was your kid or someone you love, I wonder how much of a “bother” it would be

Cell phone carriers receive an alert from Pelmorex Corp., which it distributes on its network according to the directions that are given to them, said Sophie Paluck, the Director of Communications at the Canadian Wireless Telecommunications Association (CWTA).

“So the carriers are not responsible for where the alert goes, someone else decides where the alert is disseminated,” Paluck said. “The content of the alert, what constitutes the alert … it’s up to other organizations from upstream to decide that.”

The Ontario Provincial Police in the Thunder Bay region was in charge of issuing this particular Amber Alert and in this case they are the police agency who decided where the alert would be sent.

The OPP website lists three guidelines that must be met before an Amber Alert is issued, which include:

The website states they facilitate the Amber Alert program along with the province, and the program is available to all Ontario police service. The site adds the Canadian Radio-Television and Telecommunications Commission (CRTC) has authorized the broadcasting industry to send out emergency alerts.

The OPP website said emergency alerts, which include Amber Alerts, are sent through the National Alert Aggregation and Dissemination System (NAAD system).

The NAAD system, operated by Pelmorex Corp., circulates the alerts through cable and satellite television companies, along with radio stations, other video-on-demand services and cellphone providers.

Christanto said he found the multiple alerts he received to be “annoying” since the alert made his phone vibrate like “crazy” and especially since the abduction took place in a region that is quite far from him.

“The first one, I didn’t really mind it [the alert] cause it was just one, but then I got them a few times, and that got annoying,” said Humber student Bryan Gobin. “I don’t think all of Ontario should get them, there should be a certain radius, like say a 50-km distance you need to be within of where the child goes missing.

“This could potentially help narrow the search,” he said.

Gobin said he understands it is a delicate and concerning matter, although he said a child reported missing for two hours, it seems unreasonable to send alerts to a region that is 15 hours away.

Christanto said the one thing he thinks could potentially be changed to better public perception would be to lessen the alarming way in which the alerts are sent.