A buzz kill for the bees 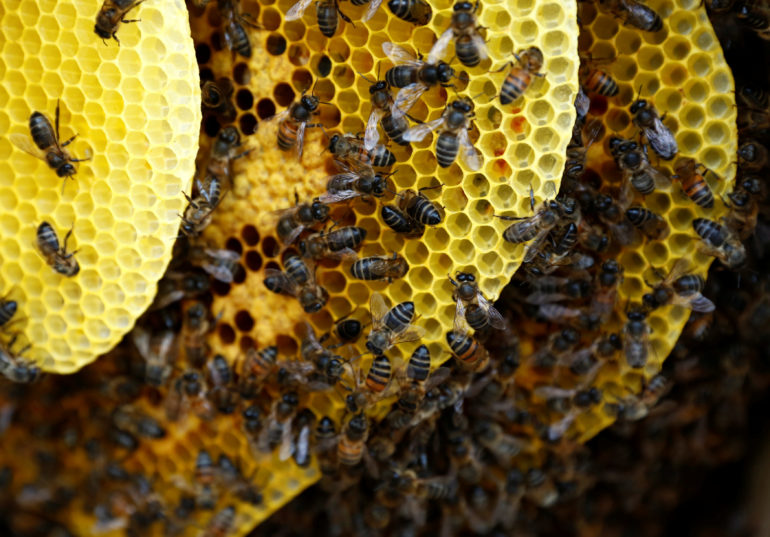 Bees seen on honeycombs inside a beehive. (Reuters/Darrin Zammit Lupi)

Concern among Canadian beekeepers is growing following a devastating loss of bees this past winter.

According to the Ontario Beekeepers Association, 900 beekeepers indicated “70 per cent suffered unsustainable losses this past winter.”

“More than 40 per cent said the recent long, cold winter that extended into spring was the main reason for the heavy losses,” it said.

Humber College supports Sustainable Urban Beekeeping to educate students on the importance of bees and their impact on environmental sustainability at the North and Lakeshore campus.

Roma Malik, a Sustainability Specialist at Humber, said the impact bees have on sustainability and that students have been positively impacted, helping them feel more connected towards these flying insects.

“To be able to have students on campus and educate them on sustainability gave us the opportunity to use the college as a test case,” she said. “And having our own bee keeping hives, and luckily have native plants surrounding them, in order for them to produce pollen and honey,” she said.

“The arboretum has done a great job to plant native plants and they’ve taken steps to actually take out the invasive species and plant more native ones so that animals that are native in the area, including bees, can thrive,” Malik said.

Humber partnered with beekeeper Fran Freeman who tends to the hives on both campuses. She owns two of the hives and the others are claimed by Humber.

Freeman said she believes there were numerous factors behind the significant decrease in bees this past winter.

“I believe there were a lot of factors including issues with the Queen Bee not laying enough eggs, pesticides including neonicotinoid that seeps into plants and everything it produces, as well long winters,” she said.

Freeman said native bees, which don’t produce honey but are important in the pollination process, are also getting wiped out, but people aren’t focusing their attention to them because they don’t produce the sweet stuff.

“We haven’t seen the Rusty Patch bumblebee in almost 10 years, and it used to be the most common bumblebee in Ontario,” she said. Bees are responsible for one in three bites people eat, as the role of both honey and native bees in pollination help grow fruits, vegetables, nuts and seeds, Freeman said.

In order to recover from these losses, support from everyone is highly recommended and needed, Freeman said. Planting more native flowers, such as blue flag iris and violets, is beneficial for native bees, and not using deadly pesticides.